An article from Jujuy al dia (translation by CPNN)

The Provincial Director of Mediation and RAC, Gilda Romero of the Ministry of Justice, took stock of the tasks carried out during 2020, stating that in the face of the health situation, due to COVID-19, community activities were developed, through digital tools, in order to achieve the peaceful resolution of conflicts and controversies that arose during the past year. 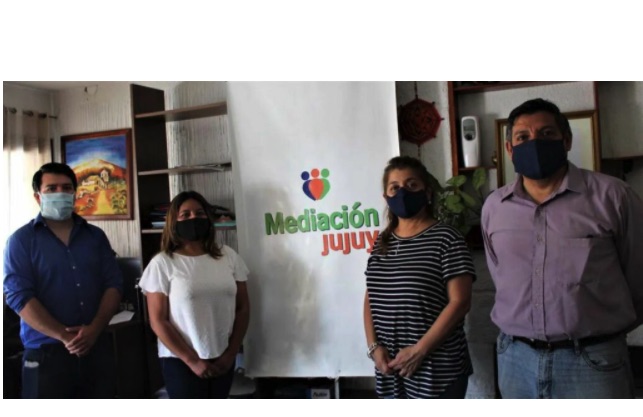 Romero highlighted that the pandemic complicated the coexistence between neighbors and relatives and sometimes led to conflicts or disputes; “Faced with this situation, the Directorate intervened by opening spaces for dialogue between those affected, in order to reach peaceful resolutions,” she said.

She mentioned that the most recurrent conflicts were caused by actions such as annoying noises, parties or celebrations, excessive volume of music, misunderstandings, incorrect waste management, abuse of the use of common spaces, such as the occupation of another’s parking spaces, being among the most common.

In addition, she recalled that they also carried out the “Virtual Conversation on Community Mediation” for the mediation centers of Libertador Gral. San Martín, La Mendieta, Perico, Monterrico, Humahuaca, El Carmen and Dr. Manuel Belgrano, providing virtual monitoring and advice in various cases that arose during the pandemic.

“Mediation as a body promotes good relations and cooperation between public and private institutions. They worked together with the Directorate for Children and Adolescents of the Municipality of San Salvador de Jujuy, through training “Protocol of Access to Justice for children, girls and adolescent victims of crime.” Also with the Provincial Council for Women and Gender Equality through the training “Law on Gender Violence and Gender Diversity.” Both trainings were aimed at community mediators.

Another task was the “Workshop Community Operators” which included four virtual meetings for students who are about to complete their studies at the Instituto Superior Populorum Progressio “In.Te.La.” of Libertador Gral. San Martin.

“As a member of the Federal Network of Mediation Centers of the country, I participated in the videoconference “20 years working for the culture of peace.” This was sponsored by the Undersecretary of Access to Justice, National Directorate of Mediation and Participatory Methods of Conflict Resolution Also later, the “Meeting of Mediators 2020″ held in the province of Córdoba,” she said.

In addition, the official mentioned that she participated in the virtual campaign with the slogan “Mediation as a lifestyle” and “Mediation in times of Pandemic”. This promoted through social networks, the importance of the essential values ​​of relationships social: dialogue, tolerance, respect, empathy and solidarity, as primary tools for peaceful and harmonious coexistence between neighbors and families.

“Community Mediation is the fundamental tool that works in the construction of a culture of peace, generating spaces for dialogue, peaceful agreements, consensus, reflections and experiences. It is the conflict management process that, through dialogue and consensus, manages to settle controversies from the simplest to the most complex, avoiding that the conflict goes into the judicial system”, concluded the Provincial Director of Mediation, Gilda Romero.