A message from Unfold Zero

77 Heads of State and Ministers took the opportunity to address the United Nations High Level Meeting on the Total Elimination of Nuclear Weapons held yesterday (October 2) in the UN General Assembly and by virtual participation.

This is probably the highest number of Presidents, Prime Ministers, Foreign Ministers and Defence Ministers to have addressed any of the high level meetings which have taken place annually since 2013 to commemorate the International Day for the Total Elimination of Nuclear Weapons. Such participation indicates widespread global concern, especially amongst non-nuclear governments, about the threat from nuclear weapons. 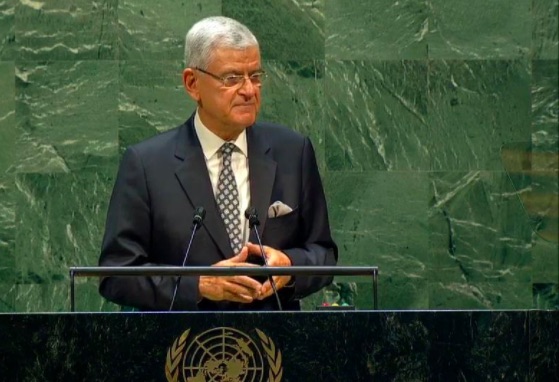 The event was chaired by H.E. Vlokan Bozkir, President of the UN General Assembly, who opened the event with a strong presentation reminding us that the UN was born out of the ashes of WWII and the nuclear bombs dropped on Japan, and calling on UN member states to fulfill their obligations to end the nuclear arms race and achieve the comprehensive elimination of nuclear weapons.

H.E. António Guterres, UN Secretary-General, followed with an impassioned speech warning that the world continues to live in the shadow of nuclear catastrophe. He urged nuclear armed states to take practical steps to reduce nuclear risks, and on all members of the Non-Proliferation Treaty to work towards a positive outcome to the Review Conference next year that takes forward concrete nuclear disarmament steps.

Statements by governments were introduced by their UN ambassadors sitting in the UN General Assembly, but then presented by the leaders (Presidents and Ministers) by pre-recorded video statements due to pandemic constraints on UN physical meetings.

The six hours of statements included many reports on nuclear disarmament action and calls for further action. These included to:

-adopt nuclear risk reduction measures such as de-alerting and no-first-use;

– support existing nuclear-weapon-free-zones and establish additional ones especially one in the Middle East;

– cut nuclear weapons budgets/investments and redirect these to addressing the pandemic and achieving the sustainable development goals;

– support existing treaties such as the NPT, Comprehensive Test Ban Treaty and the Treaty on the Prohibition of Nuclear Weapons;

– commit to the total elimination of nuclear weapons by the 100th anniversary of the UN.

Click here for a short video (2mins) with selected quotes from speakers at the High Level Meeting. Click here for the video recording of Session 1 (3 hours). The videos of both sessions and all presentations will be posted online here early next week.

Two members of global civil society were invited to make presentations to the High Level event. They are Mr Saber Chowdhury MP (Bangladesh), Co-President of Parliamentarians for Nuclear Non-Proliferation and Disarmament, and Ms Vanda Proskova (Czech Republic), Vice-Chair of PragueVision Institute for Sustainable Security and one of the convenors of #Wethepeoples2020.

Mr Chowdhury noted that ‘We all have a key role to play and engage with governments to ensure implementation of nuclear disarmament obligations, and in diverting resources from nuclear weapons to positive impacts for the economy, livelihoods and protection of nature.’ (Click here for his video presentation).

Ms Proskova noted that nuclear weapons ‘are dangerous whether they are used on purpose or due to a miscalculation. They are extremely harmful to the environment which we are so vehemently trying to protect. In the 21st century they are simply obsolete. And, what is more, they are phenomenally expensive.’ (Click here for her video presentation).

Both of the civil society representatives called on UN members to de-escalate the nuclear arms race, redirect nuclear weapons budgets and investments to meet human security needs, and commit to the total elimination of nuclear weapons by 2045, the 100th anniversary of the UN.