An article from This Day Live

Inspired by the UN World’s Women Conference 1995, popularly known as the Beijing Conference, the African First Ladies Peace Mission (AFLPM) is designed as an umbrella body of wives of African Heads of State/Presidents and Government to play a supportive role to the African Union, regional organisations, and national governments in fostering peace and reduce conflicts and their effects on the African continent. In this interview with Olaoluwakitan Babatunde, Special Assistant to the President on AFLPM and former First Lady of Nasarawa State, Dr. Mairo Al-Makura, who is now one in office, dissects the Mission’s journey so far and outlines efforts to rave up the organisation to better deliver on its mandate. Excerpts below: 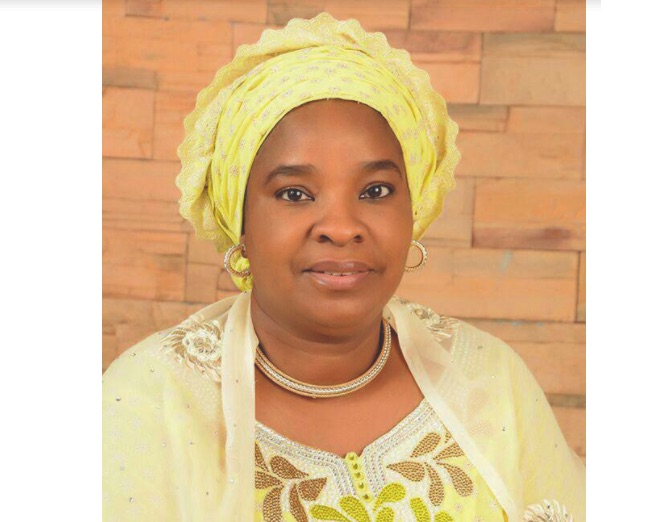 You are now a year in office as the Special Assistant to President Muhammadu Buhari on African First Ladies Peace Mission where the First Lady, Mrs. Aisha Buhari is the Acting President. How has it being, helping the First Lady run the affairs of the Mission?
It has been a tasking, but great experience. It is a kind of thing I am cut out for. Any endeavour that will promote peace and advance the welfare of women and children is my natural call. I must thank President Muhammadu Buhari for seeing the prospects the organisation holds for peace in Africa and also the First Lady, Mrs. Aisha Buhari, for deeming me fit to assist in driving the Mission. As you rightly mentioned, the First Lady is the Acting President of the Mission and I am greatly motivated by her passion for peace and success of the AFLPM.

The AFLPM has been in existence since the past 23 years, yet not many appear to know much about the organisation and its mission. At most, it is since as the pet project of successive Nigerian First Ladies?

(Laughs) No, while the passion of our First Ladies towards the African First Ladies Peace Mission, AFLPM is not in doubt, while AFLPM is headquartered in Abuja,; and whereas Mrs. Maryam Abacha, was the pioneer President of the AFLPM, it is a truly pan-African organisation that has equally been headed by the First Ladies of various other African countries. I’m talking about the likes of Excellencies Madame Constancia Mangue De-Obiang of Equitorial Guinea, Madame Antoinette Sassou Nguesso of Congo Brazzaville, and Mrs. Chantal Campaore. And they have made their great contributions.

Meanwhile, as you rightly pointed out, the AFLPM is 23 years old as it was inaugurated in 1997. It was inspired by the 4th World Conference on Women, better known as the 1995 Beijing Conference. Recall that one of the affirmations was the equal rights and inherent human dignity of women and men as enshrined in the Charter of the United Nations, the Universal Declaration of Human Rights and other international human rights instruments, in particular the Convention on the Elimination of All Forms of Discrimination against Women and the Convention on the Rights of the Child, as well as the Declaration on the Elimination of Violence against Women.

The Beijing declaration equally recognises that local, national, regional and global peace is attainable and is inextricably linked with women as fundamental force for leadership, conflict resolution and the promotion of lasting peace.

Now, if you also recall clearly, Africa has suffered an unfair share of the global conflicts and instability. In particular, we had full-blown wars and all manner of conflicts in Africa around 1995. While some African countries were enmeshed in armed conflicts, some were just emerging from it, while several others were sliding into conflicts. Talk about the Burundi civil war, Rwanda civil war, Sierra Leone civil war, Liberia civil war, conflicts in Somali, Sudan, the Eritrea-Ethiopian border conflicts, the Republic of Congo, the Congo DR, and you name them. So, the African First Ladies thought it wise to come up with an international NGO, a rallying organisation to begin to mobilise both government and non-governmental resources to promote the culture of peace, to prevent conflicts, and to reduce violence and mitigate their effects on Africans, particularly the women and children.

You know, when two elephants fight, it is the grass, in this case, the women, girls, and children that bear the brunt. It is the women and children that suffer the hunger and starvation during conflicts. It is the women that are abducted, abused, raped and killed. It is our husbands and sons that are killed, leaving us empty-handed like the hen, which has been rendered childless by the kites and hawks. So, whichever you look at it, we are at the receiving end. So, our First Ladies knew they wouldn’t sit by and watch these things continue.

The AFLPM equally believes that one of the best ways of preventing conflicts is by promoting democratic principles, cultures, and institutions as well as popular participation and good governance. For instance, if elections are free and fair, if governments across Africa respect the rule of law, if they respect the separation of powers and checks and balances, if they respect human rights, and if there is less political persecution, conflicts and instability on the continent will drop drastically.

Another major objective of the AFLPM is to work hand-in-hand with appropriate international partners in promoting peace and the eradication of preventable diseases and promotion of good health in Africa.

So, these and more were the ideals that birthed the AFLPM. The African First Ladies felt they have something to contribute to advance the cause of peace and stability and by extension, development in Africa.

So, would you say that the AFLPM has truly delivered on its objectives and mandate considering that?

Indeed the AFLPM has made a lot of contributions in fostering peace on the continent, in advocacy in matters concerning the rights and protection of women, children, and the girl child from violence. The AFLPM has equally rendered support to women and children.

However, I must concede that the Mission could have made more progress but for palpable challenges, fundamental of which is resources as well as other factors such as lack of a place of our own. At 23, AFLPM is still a tenant in Abuja. These challenges have . The good news, however, is that the Acting President of AFLPM, Her Excellency, Mrs. Aisha Buhari, is currently doing a whole lot of reorganisation and repositioning to take the AFLPM a notch higher.

On her instruction, I undertook in-depth appraisal of the place to know the challenges and how best to fix them. And I am happy that we are making great progress in terms of coordination and day-to-day running of the organisation. AFLPM is not a pet project of the incumbent Acting President or any future President of the organisation. So, we are repositioning it to run more properly as an independent and international NGO.

How much of international support do you get at the moment?

We are quite aware that AFLPM can’t achieve much without international support. Since I was appointed, we have, on the directive of Her Excellency the First Lady as the Acting President of the organisation, been building the necessary international partnerships and goodwill. We are determined to make AFLPM a respected global voice and institution the world cannot ignore.

In conjunction with the Government of Nigeria, we were supposed to host a “Roundtable on Women, Peace, and Security in Africa” in New York on the margins of the 64th Session of the UN Commission on the Status of Women last March. Sadly COVID-19 struck. The theme was actually “Young Women as Ambassadors of Peace”, and the First Lady of Gambia, Mrs. Fatouma Barrow; the Assistant Secretary General and Deputy Executive Director of UN Women, Anita Bhatia; AU Special Envoy on Youth, Mme Aya Chebbi; and Nigeria Minister of Women Affairs, Dame Pauline Tallen were all supposed to feature at the event.
In fact, from United States to Canada and Europe, we are getting cooperation by development agencies and getting better connected to the global grid of hose who make peace and development happen.

In your statement on the occasion of the 2020 International Day of Rural Women, you bemoaned the effects of insurgency on women. Why?

(Cuts in) Yes, because as I said earlier, women and children bear the brunt of insurgency. Look at the Boko Haram insurgency and their splinter groups in the Lake Chad Region alone. That is talking about Nigeria, Chad, Cameroun, and Niger Republic. According to the United Nations Office for Coordination of Humanitarian Affairs, the insurgency affects more than 17 million people in the Lake Chad Region and more than 2.2 million have been displaced; most of them are women and children. In fact, children alone constitute half of the displaced. The women and children are in the eye of the storm and more than 10.8 million people are in dire need of humanitarian assistance.

As we stated on that occasion, whenever insurgents strike, women and girls suffer abduction, rape, violation, and fatality. So, you can see where we are coming from and why we want a strong global alliance to help Africa to flush insurgents from the face of the continent. Besides, in a globalised world, no one is really safe until every part of the world, Africa inclusive, is sufficiently safe.

Talking about violence against women, statistics showed that cases of rape rose during the COVID-19 lockdown?

That is quite regrettable. But the thing is that we are not resting on our oars in the fight against violence against women, be it rape, domestic violence, and by whatever name it is called. By the way, the UN Declaration on the Elimination of Violence Against Women 1993, defines violence against women as “any act of gender-based violence that results in, or is likely to result in physical, sexual or psychological harm or suffering to women, including threats of such acts, coercion or arbitrary deprivation of liberty, whether occurring in public or private life.

To mark this year’s International Day for the Elimination of Violence Against Women, we are holding a live virtual event as we join the UN Secretary – General’s campaign, UNiTE to End Violence against Women by 2030. Apart from the First Lady of Nigeria, who will be delivering the keynote address, the First Ladies of Sierra Leone, Congo Brazzaville, Gambia, and South Sudan as well as representatives of international organisations from the United Nations, African Union and ECOWAS will be speaking a the event too.

Apart from raising awareness on violence perpetuated done to women and girls, there will equally be trauma and counseling session for the victims and those who survived such violence. We are also making arrangement to support them with relief packages.

You talked about lack of permanent office earlier. How come AFLPM does not have an office it can call its own after 23 years?

It is a long story and this has greatly hampered our programmes. Mind you that we are not talking about just office spaces. If it were so, we wouldn’t be bothering ourselves. However, because AFLPM is not a jamboree. It is utilitarian in concept and that is why we equally need a permanent office that is also utilitarian in nature.

The Acting President of AFLPM, Her Excellency, Mrs. Aisha Buhari has made it one of her cardinal agenda to ensure we build one soonest. We will be reaching out to all African nations as well as captains of industry and public-spirited individuals across the continent, who believe the cause of peace and women for their support. We believe it is doable and we will do it in our time.