The Councilor for Cooperation and Volunteering of the Municipality of l’Alfàs del Pi, Isabel Muñoz, attended the Conference ‘ODS 16: Ciutadania per la Pau, Educació en i per al Conflicte’, organized by the Fons Valencià per la Solidaritat in Gandía . The initiative is part of the ‘Valencia for Peace’ project, which is co-financed by the Diputación de Valencia, and whose main objective is to raise awareness and promote the Culture of Peace and SDG 16, regarding the construction of peaceful, fair and inclusive societies. 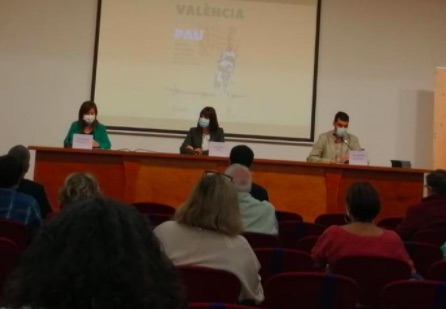 The event was attended by Federico Mayor Zaragoza, president of the Culture of Peace Foundation and former Secretary General of UNESCO, and Jesús E. Núñez, co-director of the Institute for Conflict Studies and Humanitarian Action. In addition to their speeches, the documentary ‘Els Fils del Tauler’, by the Collectiv Mirades, was screened, and a debate was opened with the director and with two refugees who star in the film.

“These conferences have been of great interest to us, because they follow the same strategy that the City Council of l’Alfàs has been promoting for years, spreading the Culture of Peace through mediation in the educational and family sphere with workshops, courses and conferences aimed mainly at the educational community,” explained Isabel Muñoz.

L’Alfàs del Pi is a pioneer in the application of mediation in conflict resolution in the school environment, a project aimed at improving coexistence in classrooms and preventing violent attitudes. The school mediation program began a decade ago at IES L’Arabí and, given the good results, in 2015 it was extended to the three public Primary schools: Veles e Vents, Racó de l’Albir and Santíssim Crist del Bon Encert.

Following in the same vein, the City Council of l’Alfàs promoted four years ago the creation of a mediation service for families from the educational field whose main objective is to promote a climate of dialogue that enriches coexistence in the family environment.

The Councilor for Cooperation and Volunteering has reiterated “the commitment of l’Alfàs del Pi to the Sustainable Development Goals and the 2030 Agenda’, for which different activities and initiatives are promoted throughout the year.

L’Alfàs del Pi joined the Fons Valencià per la Solidaritat in 2019, an association in which more than a hundred municipalities of the Valencian Community are integrated to develop cooperation projects for development and awareness and education in values.