On Tuesday, September 29, 2020, there was a launching ceremony of the awareness campaign to strengthen the participation of women and young people in the various inter-community dialogue frameworks and to facilitate the consideration of their specific needs. This ceremony took place in the meeting room of the Governorate under the chairmanship of the Governor of the region Mr. Issa Lemine. 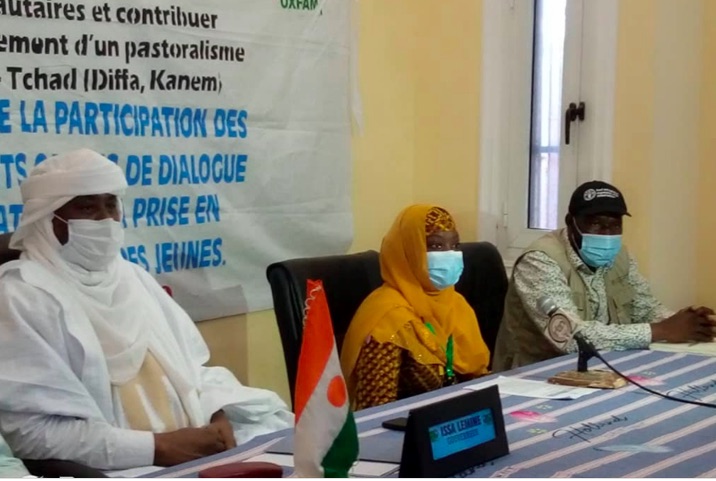 We noted on this occasion the presence of the prefect of Diffa, the Head of the Diffa office of OXFAM, the head of the FAO Sub-Office, the Head of Canton of Koumadougou, representatives of the Communes of N’Gourti, of N ‘ Guigmi, Kablewa, Toumour, Gueskérou and Bosso. Organized by the NGO OXFAM, this ceremony aims to put in place a holistic approach that supports the Emergency-Development-Peacebuilding triptych.

In her speech on this occasion, the Head of the OXFAM office first thanked the participants for their massive participation in this ceremony before setting the objective of this activity. According to Hadjia Gouya Mahamane Delley, the aim is to sensitize communities on the importance of taking into account the specific needs of women and young people in community decision-making bodies. It is also about sensitizing these communities on the role of women and young people in the culture of peace, social cohesion, peaceful coexistence and non-violent conflict management. The Head of the Diffa office of OXFAM also noted the feasibility of presenting a plea to the leaders for a better representation of women and young people in community programs. Finally, she insisted on the important role of women in the management of conflicts linked to transhumance.

Launching this campaign, the Governor of Diffa first welcomed the initiative to involve women and young people in the different decision-making systems within the communities. Mr. Issa Lemine then underlined that the issue of local development is essential for good governance. It is a challenge for public authorities, local authorities and local communities. For the governor of the Diffa region, this approach is part of the participatory and in-depth analysis of the determinants of conflicts and factors of peace to strengthen regional and local consultation frameworks, with a view to facilitating peaceful access to natural and especially pastoral resources for a contribution to the consolidation of peace.