An article by James Sowole from This Day Live 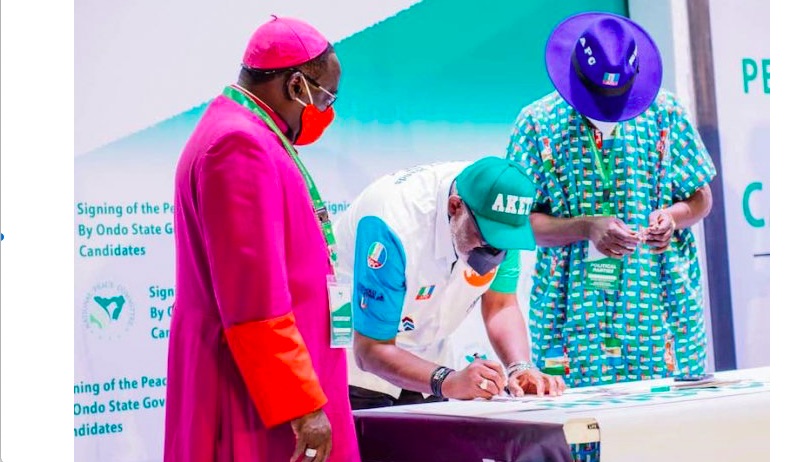 The Catholic Bishop of Diocese of Sokoto, who is a member of the National Peace Committee (NPC), Matthew Hassan Kukah, watching the Ondo State Governor, Mr Oluwarotimi Akeredolu, as he signs the Peace Accord.

The candidates made the pledge at the signing of a peace accord organised by the National Peace Committee (NPC) in collaboration with the Independent National Electoral Commission (INEC).

The event took place at the International Cultural and Event Centre, the Dome in Akure, the state capital.

Addressing the contestants, the chairman of NPC and former Head of State, Gen. Abdulsalami Abubakar (rtd), who spoke via Zoom, advised all stakeholders to demonstrate commitment to the spirit of the accord.

The former head of state, who urged the candidates to use the Edo election as a lesson for the Ondo State exercise, called on the electorate to cast their votes in the election without fear of intimidation or coercion.

He explained that those who signed the peace accord had committed themselves to ensuring peace in Ondo State and Nigeria at large before, during and after the election.

“The tension and anxiety associated with election necessitated the setup of the National Peace Committee which is to support peaceful election process and enthrone culture of peace.

“In 2014, the committee conveyed efforts to support peaceful election as well as ensuring a peaceful transition.

“The intervention of the committee contributed immensely to the success of the 2015 election. The NPC has since successfully intervened in the general election to ensure a peaceful outcome to the 2019 general election even at the just concluded Edo governorship election.

“The governorship election in Ondo State is only a few days away and we want peace during and after the election. We want to see Nigeria as a place where people come out peacefully and vote during the election without deprivation and Ondo State deserves this.

“As we go into the election, we have been given assurance by the Independent National Electoral Commission (INEC) that they will conduct a free, fair and credible election. The rest is left for the voters to do what is right,” Abubakar said.

Also, members of the NPC, Bishop Mathew Kukah, and the Sultan of Sokoto, Sa’ad Abubakar, charged the youth not to allow themselves to be used for political violence.

According to Bishop Kukah, “It is imperative to call on everyone to work towards peaceful election to ensure peace reign during and after the election.”

In his remarks, the INEC Chairman, Prof. Mamood Yakubu, said the commission had met 12 of the necessary steps for the smooth conduct of the election. Yakubu urged political parties and their supporters to maintain peace for the conduct of the exercise to be peaceful.

The Inspector General of Police (IG), Mohammed Adamu, represented by Deputy Inspector General (DIG) Leye Oyebade, while assuring the people of the safety of lives and properties, said the police had been able to map out all the three senatorial districts and the 18 local government areas in the state.

The IG advised members of the public to follow the guidelines for a peaceful election.

In their words, the three major candidates from APC, PDP and ZLP, Akeredolu, Jegede and Ajayi restated their commitment to ensuring a peaceful poll.

The event was also attended by the Chairman, Ondo State Council of Obas and the Olugbo of Ugboland, Oba Fedrick Akinruntan, the Deji of Akure, other traditional rules and religious leaders, among others.