An article from Pressenza (reprinted under a Creative Commons Attribution 4.0 International license)

This year it’s really complicated in this part of the world to hold a joyful celebration about nonviolence. The International Day of Nonviolence is a celebration of Gandhi’s birthday and an opportunity to commemorate the work of many others who have opened a path a to nonviolent conflict resolution, built a culture of peace, opposed systemic discrimination, and fought against the destruction of humanity’s habitat. 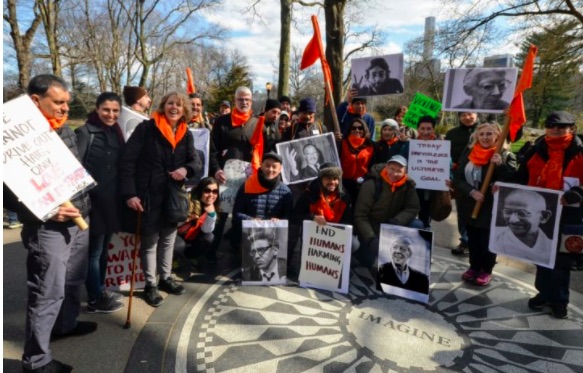 It is very suspicious that mainstream media will be not be covering this day, since corporate media makes large profits from reporting all forms of violence and bias. There will be no trending on Twitter, no special debate in Congress. Joe Biden will not be announcing his plans for developing nonviolence curricula for Kindergarten to college students. CEOs won’t unroll their strategy for reinvesting the money, concentred today in very few hands, to serve the community at large. And we probably won’t see the police addressing their entrenched discrimination against communities of color, and talking about how to stop being hypermilitarized agents beating and killing people on the street. This list can go on and on.

Now, of course, we have seen some opportunist politicians asking protestors — after seeing the killing of their brothers by police — to organize nonviolently, but without themselves condemning the immoral and disproportionate use of violence by the police and city officals. For them, it seems nonviolence is to be used by minorities fighting against a violent system that created the problem at the first place.

Today, we recognize nonviolence’s power of transformation. Nonviolence has transformed countries, changed the face of continents, and given cultural identity to discriminated communities. We are perhaps in front of the total collapse of this violent system we live in and we need to actively build a culture of nonviolence. It is the only real option for the future of the human race and our environment.

In closing, here are few words from Silo, an Argentinian leader in nonviolence, extracted from one of his most important speeches, “The Healing of Suffering,” given in Punta de Vacas, Argentina on May 4, 1969: