A film from Not in our town, a movement to stop hate, racism and bullying, and build safe, inclusive communities for all.

Camden’s Turn is a documentary about a police department and a community in the process of transformation. As views of police and the communities they serve have become polarized across the country, Camden, NJ Police Chief Scott Thomson works to build relationships and calls on his officers “to shift from a warrior mentality to that of a guardian and community builder.” 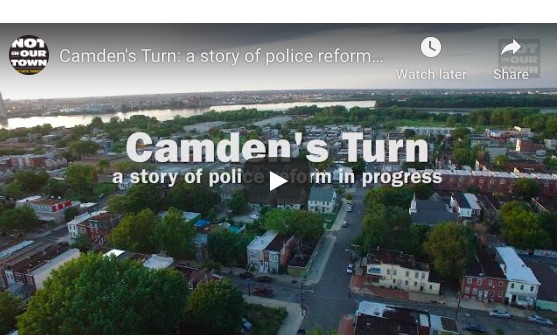 The film follows Chief Thomson, his command staff and officers, as they work to implement community policing reforms in Camden County.

After the entire police force was laid off in 2012, Chief Thomson rebuilt the department and instituted a culture of community policing — incorporating de-escalation training, engaging officers in sports, school programs and community events, putting officers on bikes in neighborhoods and parks, and getting officers out of patrol cars and walking the beat.

Camden’s strategy was highlighted by President Obama’s national efforts to implement the recommendations outlined in the President’s Task Force on 21st Century Policing. After years of mistrust, violent crime, high arrests rates and devastating poverty, the film looks at how things are starting to turn around in Camden. Crime rates are down, people feel safer, and jobs are coming back to the city. (29 minutes)

This guide is designed as a tool for law enforcement and community stakeholders to facilitate screenings and discussions of the 29-minute Camden’s Turn: A Story of Police Reform in Progress. The guide provides: discussion questions and tips for organizing internal law enforcement agency and community screenings; information about community-oriented policing; and supplemental resources. Used together, the film and guide can help agencies and community groups work together to help improve law enforcement-community relations and build collaborative public safety partnerships.

[Editor’s note: According to an article in CNN published on June 9, Camden dissolved its entire police department in 2012 because it was corrupted with the drug trade and replaced it with a new police force with “community-oriented policing.” “It starts from an officer’s first day: When a new recruit joins the force, they’re required to knock on the doors of homes in the neighborhood they’re assigned to patrol, he said. They introduce themselves and ask neighbors what needs improving.”]