Conflict resolution is a recurrent theme in East Africa. This has prompted the need for innovative ways to create lasting consensus in the region as well as across the continent. One of these innovative ways is peace journalism. It can stimulate peaceful resolution of conflict by voicing different conflicting parties and issues in a balanced and objective manner. The Conversation Africa’s Julie Masiga spoke to Fredrick Ogenga about the role of peace journalism in Africa. 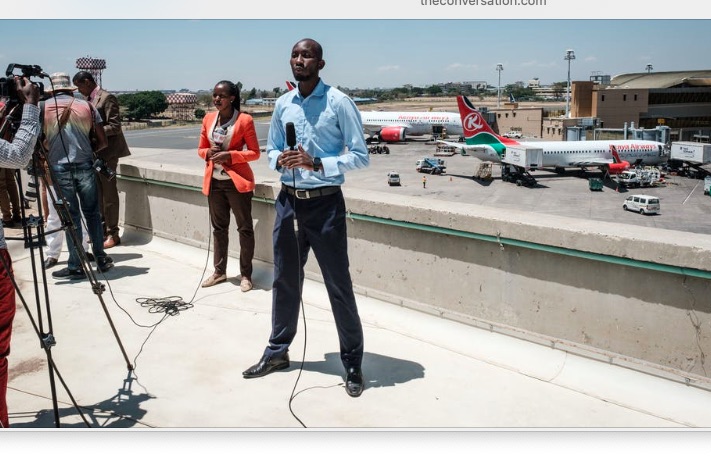 TV reporters prepare for a live broadcast during a strike by airline workers in Nairobi. Yasuyoshi Chiba/AFP via Getty Images

What is peace journalism and why does it matter?

Peace journalism is evident when reporters and editors make deliberate choices in their day to to day work that create opportunities for society at large to consider and value nonviolent responses to conflict.

The approach opens the possibility of a new road map tracing the connections between journalists, their sources, the stories they cover – and the consequences of their journalism. It builds awareness of nonviolence and creativity into the practical job of everyday editing and reporting that brings different parties to the negotiating table.

However, it is a Western concept that needs decolonising in terms of orientation and applicability. African peace journalism rejects the notion that “nothing good can come out of Africa”. It seeks to challenge the negative narratives about Africa. Africans can be both authors and sources of positive narratives. This requires us to rethink our set of news values if we are to imagine a new kind of transformative journalism.

We must also be clear about what peace journalism isn’t. It is not reporting that is wholly or even primarily oriented towards peace at all costs. It does not sacrifice truth and justice for a “law and order” type of peace as defined by the state. Instead, the essential elements of this form of journalism include sensitivity, agility, caution, factual information and self-reflectivity in relation to what media practitioners put into the content of news reports and editorials.

The nature of conflicts and the degree of media freedom varies from country to country. For this reason, these elements may not be uniformly applicable. For instance, covering a civil war will differ from reporting on terrorism or political or election-related conflict. However, these elements and the values will help foster a culture of peace and nonviolent conflict resolution across the region.

The manual for media practitioners that I recently edited tries to present this vision. The publication was the outcome of a workshop of journalists and scholars in the area of conflict and peacebuilding in East Africa.
Contributing experts are of the view that sensitivity to peace and the nonviolent prevention and resolution of conflict is best captured within the conceptual framework of “peace journalism”.

What are the highlights of the manual?

The chapters cumulatively represent a rich repertoire of experiences and cases that skilfully tell the story of the connections between media and peacebuilding in East Africa.

African peace journalism is journalism with African nuances and lenses that imbibe African values and philosophies. These would mean the inclusion of Utu/Ubuntu (humanity), Harambee (collective responsibility), and Umoja (unity) as news values. The manual captures these Afrocentric views of journalism in the context of the continent’s peace and security challenges.

* Gloria Laker explores the role of peace journalism in ending the Lord’s Resistance Army insurgency (1988-2006) in northern Uganda, drawing upon Laker’s own experience as a war reporter.

* Duncan Omanga approaches the concept of terrorism as a form of political communication through public spectacle (and mass hysteria) and warns of the dangers of inappropriate labels in news coverage and reportage.

* Finally, I offer a conceptual overview of a hybrid (African) peace journalism in the context of emerging terrorist threats in Kenya. I explain how this unique approach to peace journalism combines elements from Western peace journalism and African lenses in conflict-sensitive reporting.

Our contribution to the peace journalism debate as Africans is slowly gaining popularity in the minds of ordinary people. This has been made possible through social media spaces where local content creators are taking the lead in pushing the narrative especially when it comes to contentious issues such as electoral politics. User generated content holds sway on social media.

Nevertheless, the manual has some good examples of both peace journalism and Africa peace journalism capturing cases in Kenya and Uganda. Most of these are stories are about ethnic politics, gender body politics, human rights and violent extremism.

Are there instances where the media have made conflict worse?

Yes. This was experienced in Kenya’s 2007-2008 general elections, which ended in post-election violence. It was at that point that I began exploring ways to make the media part of the solution and not the problem. Kenya’s media has often behaved ignorantly when reporting electoral politics and even violent extremism when it has manifested in terrorist attacks.

A keen observer knows well that the way the Kenyan media covered the Dusit Hotel attack in 2019 was different from the manner they reported the Westgate attack in 2013. The Westgate Mall attack coverage was much more sensationalist. The difference didn’t happen by chance. It was deliberate. The 2019 coverage was a product of extensive advocacy and training over the years on conflict sensitive journalism, which is largely the objective of the peace journalism manual.

During the 2013 general election, the Kenyan media was accused of pursuing the peace agenda at the expense of independence. Where do you draw the line?

We do not want journalists to be peace crusaders or televangelists. All we need to see is some journalism with an African lens, that speaks to Africa’s sense of agency, context and locality.