From Friday November 18 to Sunday November 20, 2022, as part of the national congress of the Mouvement de la Paix, more than 400 people participated or attended one of the initiatives organized in the City Hall of Tours by the Mouvement de la Paix (Art and Peace exhibition, international forum, national congress of the Peace Movement, cultural and musical evenings). 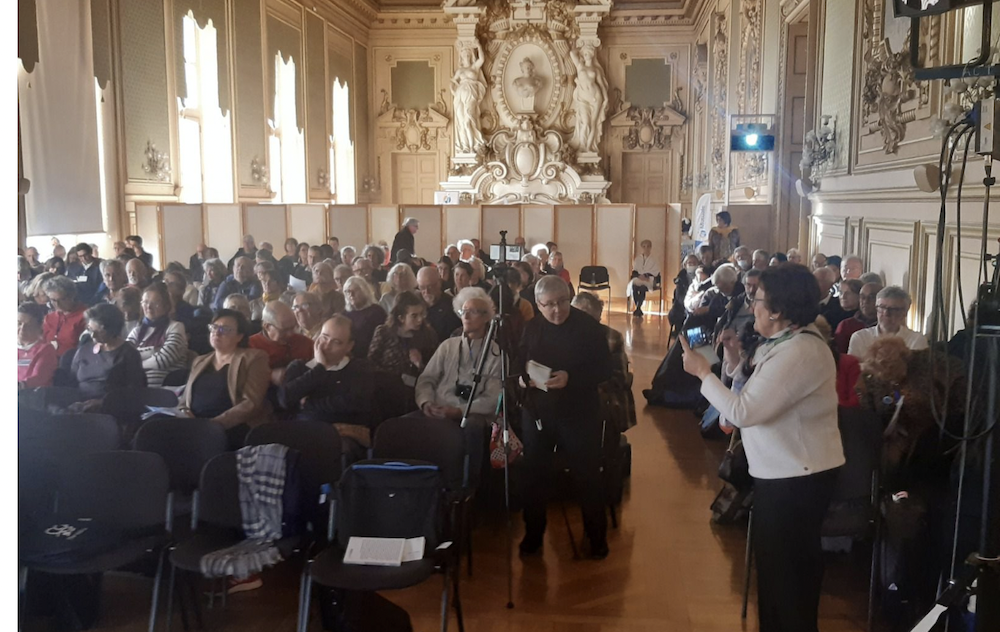 150 activists from 62 departments were delegates to the congress.

At the opening of the exhibition proposed by the Gallery ‘Art and Peace’ we were more than 300 people, many local personalities, representatives of associations and friends of the Peace Movement, trade unions, a good diversity. .. A magnificent exhibition, a forum with a full room, extraordinary cultural evenings, a lively congress

The Mayor of Tours Emmanuel Denis speaking on behalf of the city which made the premises of the City Hall of Tours available for 3 days to the Congress of the Peace Movement, made a beautiful speech rooted in the history of Tours. Among those present at the opening were Deputy Charles Fournier, Vice President of the Center Val-de-Loire Region Jean Patrick Gille, Regional Councilor Isabelle Texeira, Departmental Councilor Mrs Ursula Vogt and many councillors, Deputy Mayor of Tours and the municipalities of the department as well as associations, unions, personalities from the world of culture.

The President of the Centre-pays de Loire Region, François Bonneau, sent a message to the delegates insisting on the importance of peace, the complementary role of communities and citizens in the defense and construction of peace.

(Editor’s note: Click here for the Peace Appeal issued by the Congress.)

(Click here for the French original of this article.)

In this period, when we see a certain decline in citizen commitments, in a serious and worrying international situation, everyone can only rejoice in this citizen mobilization for peace, which attests to the representativeness of Mouvement de la Paix. and the reality of citizen engagement and gathering around this movement. The Movement is recognized as one of the structuring elements of resistance to war, to all wars and a citizen force, capable of bringing together including through his role as one of the leaders of the national collective of marches for peace made up of 210 organizations in France.

We are pleased to send you below a first report produced by Ms. Manon Salé, journalist at CitéRadio Tours.

We had planned a press meeting on Friday evening around certain foreign participants. At the end of this press briefing, Manon Salé made a very interesting montage which gives a good overview of the work of the international forum and the general atmosphere of these 3 exceptional days..

This report contains interviews with the following people.

Ludo De Brabander, Pacifist activist from Belgium, returned to the issues of common security in Europe and in the world.

Shura Dumanic, one of the coordinators of the feminist peace movements in the former Yugoslavia, shared with us her experience of peace and war in Croatia.

Jim Anderson, animator of Peace Action, one of the largest pacifist networks in the USA, insisted on the importance of getting involved by carrying out concrete actions for peace.

Cherifa Kheddar, president of an association for the defense of victims of Islamist terrorism in Algeria (Djazairouna), emphasized the human dimension of conflicts and peace, which according to her passes through women.

Roland Nivet, national spokesperson for the Mouvement de la Paix, also spoke. In particular, he explained the importance of establishing an “economy of peace”, as opposed to the “economy of war”.

Finally, Michel Thouzeau, national secretary of the Mouvement de la Paix, offered different solutions to prepare for peace and returned to the word “utopian”, which is often applied to peace activists.

Once the conference was over, we went to the opening of the Art for Peace exhibition in the city hall for the speech of the Mayor of Tours Emmanuel Denis. He recalled the importance of art and the commitment of the city of Tours for peace.