An article from Transcend Media Service

World BEYOND War has launched a new online tool at worldbeyondwar.org/no-bases  that allows the user to view a globe pock-marked with 867 U.S. military bases in (76) countries other than the United States, and to zoom in for a satellite view of and detailed information on each base. The tool also allows filtering the map or list of bases by country, government type, opening date, number of personnel, or acres of land occupied. 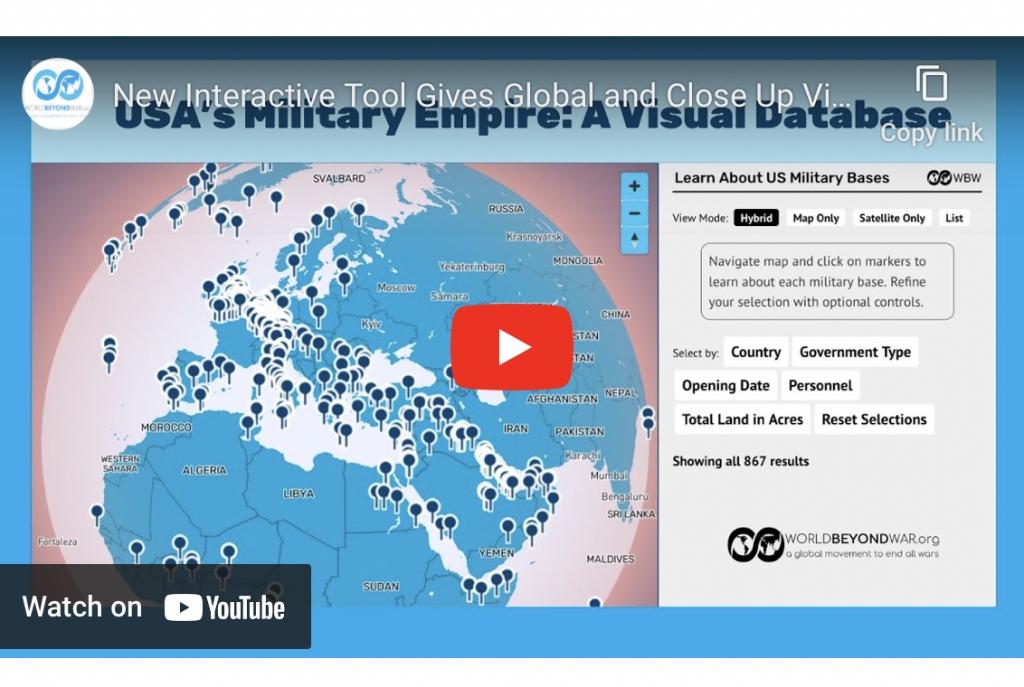 video about the new bases tool.

This visual database was researched and developed by World BEYOND War to help journalists, activists, researchers, and individual readers understand the immense problem of excessive preparation for war, which inevitably leads to international bullying, meddling, threats, escalation, and mass atrocity. By illustrating the extent of the U.S. empire of military outposts, World BEYOND War hopes to call attention to the wider problem of war preparations. Thanks to davidvine.net for a variety of information included in this tool.

The United States of America, unlike any other nation, maintains this massive network of foreign military installations around the world. How was this created and how is it continued? Some of these physical installations are on land occupied as spoils of war. Most are maintained through collaborations with governments, many of them brutal and oppressive governments benefiting from the bases’ presence. In many cases, human beings were displaced to make room for these military installations, often depriving people of farmland, adding huge amounts of pollution to local water systems and the air, and existing as an unwelcome presence.

U.S. bases in foreign lands often raise geopolitical tensions, support undemocratic regimes, and serve as a recruiting tool for militant groups opposed to the U.S. presence and the governments its presence bolsters. In other cases, foreign bases have made it easier for the United States to launch and execute disastrous wars, including those in Afghanistan, Iraq, Yemen, Somalia, and Libya. Across the political spectrum and even within the U.S. military there is growing recognition that many overseas bases should have been closed decades ago, but bureaucratic inertia and misguided political interests have kept them open. Estimates of the yearly cost to the U.S. of its foreign military bases range from $100 – 250 billion.