An article from Agenzia Nova

A long colorful procession marched today in Roma to protest the conflict in Ukraine. The snake of people gathered in the late morning in a square of the Republic full of rainbow flags, banners, symbols of peace and the 600 associations that participated in the march. At the head of the procession, which paraded up to piazza San Giovanni – passing through via Cavour, piazza dell’Esquilino, piazza di Santa Maria Maggiore and via Merulana -, the mayor of Rome, Roberto Gualtieri and the general secretary of the CGIL, Maurizio Landini, who accompanied the march holding the banner of the Italian Peace and Disarmament Network. The demonstration, organized to ask for a negotiation for peace, was organized by the trade unions CGIL, CISL and UIL, ARCI, ACLI, ANP, together with the community of Sant’Egidio, the association Libera, Emergency, Sbilanciamoci and the Aoi. 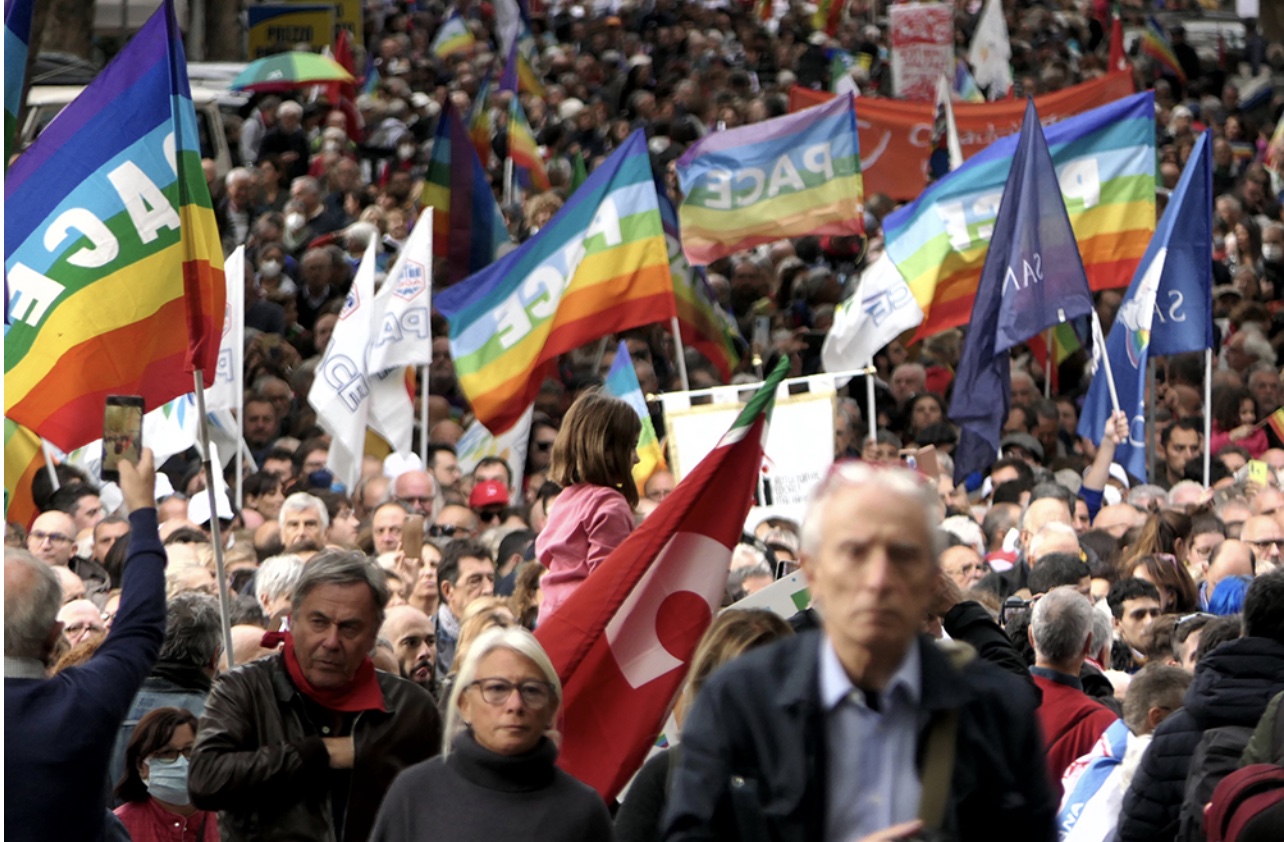 A large stage set up with white and red balloons welcomed the demonstrators as the march arrived. And from here the interventions of the institutions and representatives of various organizations alternated. Reduce military spending in favor of investments for poverty, ecological transition and decent work, guarantee shared security, which “does not come from weapons that only cause suffering to the populations”: these were some of the demands raised by the stage.

“My compatriots feel the consequences of this war personally. We believe that every conflict must be resolved in a peaceful way because human life is the greatest value, the life of every Ukrainian is the greatest value like the life of every Russian “, said in a video message an activity of the pacifist movement. Ukrainian, to the cheers of the crowd. According to the organizers, 100 people participated in the parade, 45 for the Police Headquarters.

(Editor’s note: According to Agence France Presse the police reported that the peace rally was attended by some 30,000 people.)

Among those present at the event also the secretary of the Democratic Party, Enrico Letta and the president of the 5-star Movement, Giuseppe Conte who explained: “Today there are no political flags but citizens who parade, who tell the Italian government and not only that we are tired of this strategy that only provides for military escalation, we want a peace negotiation, difficult to build but we must succeed and this cry rises loudly from the silent majority of the country ”. For Rome it is “very important to be here for peace against this terrible war unleashed by Putin,” said Gualtieri. “We stand by the Ukrainian people because they work to make peace and law prevail,” he added.

Today’s goal “is to overcome war as an instrument for regulating relations between states”, he continued Landini. “We must not only stop this run-up but prevent nuclear weapons from continuing to be built and it is time to shift spending on health, knowledge, training and work to allow people to live in peace but with dignity. China and the United States play a decisive role in this phase – he stressed – and I believe that Europe must also play a role in the relationship between Ukrainians and Russians that is able to ensure that a ceasefire prevails, that can start the negotiations and – he concluded -, as proposed by the President of the Republic, I believe it is time to work to build an international peace conference since behind this war there is a re-definition of the political equilibrium of the world ”.