An article from Le Nouvelliste

Evans Okan, General Director of Educultura Educación Sin Fronteras and International Director for Latin America of IFLAC World (International Forum for Literature and Culture of Peace), talks about the first edition of the IFLAC World Peace Festival that he conducted this year in Argentina from September 21-25, 2022. 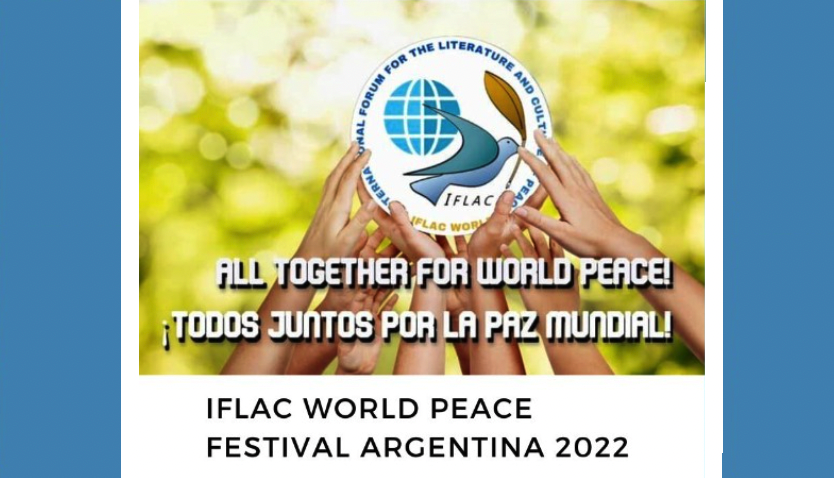 Ticket: What is the iFLAC World Peace Festival? (Tell us a bit about the festival; Date of creation, objective, etc.?)

I had the great honor of leading the festival this year as International Director for Latin America and the Caribbean of IFLAC World, but also as Chairman of the Organizing Committee of the event, accompanied by three renowned poetesses of the region: Samiri Hernández Hiraldo, festival coordinator, originally from Puerto Rico, Jennifer García from Colombia was in charge of promoting this great event and Alicia Muñoz Veri from Argentina, as vice-president of the committee.

We have the firm conviction that peace is born from the heart and becomes an act and an immediate presence when the word manages to penetrate and deeply move souls, deciphering their dreams and clarifying their uncertainties. It is therefore from poetry, art, creative thought and culture that the world can change and in fact it does, despite the great differences and conflicts that sometimes divide us and seek to isolate.

Ticket: How is this event important to you as a Haitian?

Evans Okan: First of all, we must consider that Haitian literature is a literature of resistance, which is directly associated with the struggle for freedom and the promotion of universal peace, as mentioned by Dr. Reina Sotillo, Minister Plenipotentiary of Argentina, in his opening speech. Our literature was born at the time of the revolution and culminated with the great epic of Toussaint Louverture and the proclamation of independence in 1804.

Yet the first free country in Latin America and the Caribbean suffered from foreign harassment from the start, starting with the abusive debt of independence that France demanded from our country and that took more than a century to liquidate.

For me, as a Haitian, faced with this harsh reality and in a world largely marked by war, borders and discrimination, the IFLAC World Peace Festival Argentina 2022 was the perfect opportunity to:

1. Remind our brothers in Latin America of the great cultural richness and social ties that unite Haiti to the other countries of the region in a common dream of freedom, peace, greatness and prosperity, beyond linguistic differences or others. It is this wave of love and fraternity that has united us. The love of our roots, of what we really are and not of what the other wants us to be.

2. Advocate for a more humane political and social system in our region, whose sole purpose is development and the common good.

3. On the other hand, it was also an opportunity to plead, through art, for real social justice in our countries, for a fairer distribution of wealth and opportunities. We cannot speak of peace when, before our very eyes, neighboring countries are dying of hunger and whole populations sinking into violence, conflict and disease.

4. To say that in 2022, it is UNACCEPTABLE that many countries in the Caribbean region and Latin America, such as Haiti, the first black republic, the country that was the first to rise up against slavery to obtain freedom from colonialism, be plagued by internal conflict and ruined by the burden of international debt for Third World countries.

5. Draw the attention of our leaders and the various sectors in Haiti to this, to remind them that the only way out is to be able to decide for ourselves and take charge of the future of our people. Together we can eradicate hunger, poverty, injustice, violence, mental slavery and domination.

6. Remind everyone that Haiti is a land of art, culture, spirituality and mystery, far from being the poorest country in the Americas.

How can poetry promote a culture of peace?

Ticket: The festival brought together different countries including Mexico, Colombia, Argentina, among others. What explains the choice of these countries in particular?

Evans Okan: The International Forum for the Literature and Culture of Peace (IFLAC), is a voluntary association founded and directed by the Egyptian-born Israeli writer Ada Aharoni (Ph.D), since 1999, in addition to her vice-president, writer Elena Vargas, who lives in England, the organization enjoys a global reach, with 22 years of promoting peace and representations in several countries around the world. But, this particular festival was sponsored by the regional representation that I lead, which includes Latin America, the Caribbean and Spain.

In this context, poetry, art and the different cultural manifestations of the countries of the region were present in a fraternal encounter full of hope, with the aim of creating new links and spaces of solidarity, recognition and cultural diffusion. through the voice of our poets, writers, artists, journalists, teachers and cultural promoters as the most effective, authentic and powerful way to build a better, more harmonious and more humane society in pressing and difficult times like the ones we are experiencing .

Ticket: Why the choice of Indran Amirtanayagam as one of the two personalities to be honored within the framework of this first edition?

These awards are now part of the official activities and initiatives of IFLAC World, to stimulate, promote and exalt the life and work of writers, artists and cultural leaders committed to the ideals of peace that define them.

For IFLAC World and Educultura, awarding this prize to these two great literary references is a unique opportunity to celebrate their fundamental principles and values ​​expressed in a poetry full of meaning and quality, always attentive to the evolution of history and realities. of our peoples.

The life and work of the poet Indran Amirthanayagam, is a categorical example of consecration and humanism in our century, not only for his immense creative talent, but also for his very high quality as a human being, as a leader, as a diplomat, as a teacher and as a friend to all.

Ticket: Who were the representatives of Haiti at this first edition of the iFLAC World Peace Festival?

Evans Okan: We all know that literature is a strong point of Haitian culture, on this occasion Haiti was represented by me, not only as international director of IFLAC World Latinoamerica but also as a writer, because in addition to n being in charge of the direction of the festival, I participated in two reading tables where I presented some of my poems written in French.

Jovanie Jean Pierre, a young student from the city of Jérémie, who is participating in the Educultura study program in Argentina, did me the honor of reading the Spanish translation of my poems, which was a very moving moment for me. and for all the public.

On the other hand, the Haitian poet Martine Milard, residing in France, was also invited to participate in the event, but could not attend for personal reasons.

Ticket: A review of this edition? What are your prospects for the other years to come?

Evans Okan: During the four days of the festival, cultural and educational activities were carried out, which the local people received with great affection, enthusiasm and gratitude. The IFLAC World Peace Festival, Argentina 2022 has successfully fulfilled its mission to bring a message of peace to the world and to summon the highest commitment, responsibility and love for our people, our country, our continent.

Haiti has long been considered a symbol of peace and freedom, however, due to the social, political and economic problems the country is currently facing, this image has weakened. We are aware that art, education, culture and creative thinking are the best way to recover communities, strengthen their connection with the world and contribute to their development. For this reason, we are working so that the location of the next IFLAC World Peace Festival is Haiti, because among other things, we recognize its great cultural richness, its heritage and all that it can offer to the other peoples of Latin America.

The fact that the first edition held in Argentina was led by a Haitian artist and cultural ambassador opens the door for this project to be enthusiastically welcomed by my people next year. The IFLAC World Peace Festival, Haiti 2023, is now our main focus. We hope to bring poetry, art and other cultural manifestations to this community, through a fraternal encounter, which generates new bonds and spaces of solidarity, recognition and cultural diffusion.

Finally, I would like to thank the whole team at Le Nouvelliste for allowing me to reconnect with my roots through this interview and for giving me the opportunity to remind our society that our country still retains many values ​​and the hope of a future change.