A Mayors for Peace delegation attended the Tenth Review Conference of the Parties to the Treaty on the Non-Proliferation of Nuclear Weapons (10th NPT Review Conference) in New York. Headed by Vice President TAUE Tomihisa (mayor of Nagasaki) and Secretary General KOIZUMI Takashi, the delegation appealed to the representatives of national governments to adopt a final document for promoting nuclear disarmament and non-proliferation and respect what had been agreed on at the first Meeting of States Parties (1MSP) to the Treaty on the Prohibition of Nuclear Weapons (TPNW). The Mayors for Peace delegation also requested greater understanding of and continued support for the initiatives of Mayors for Peace from the national government representatives. 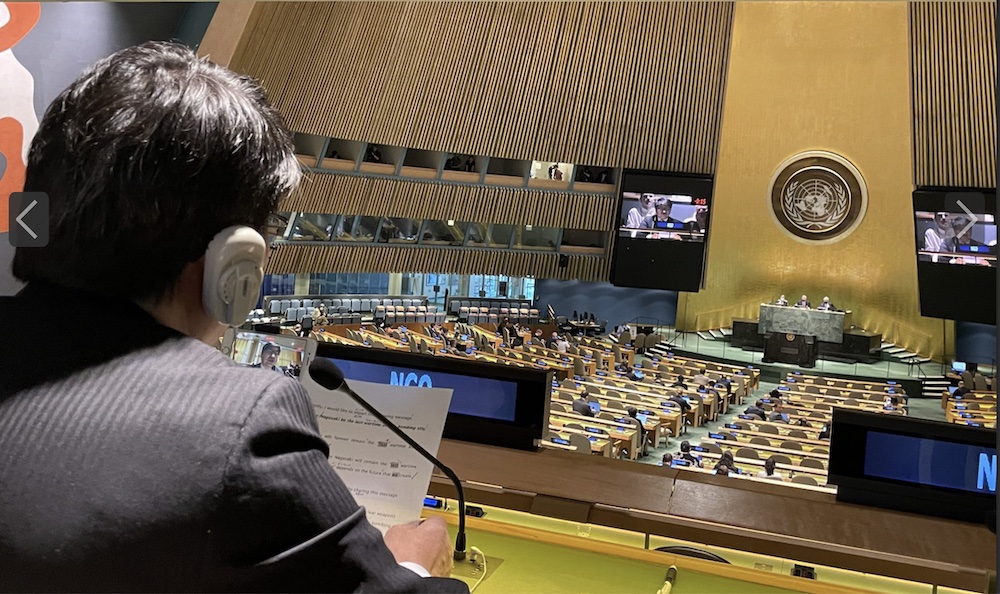 At the UN Headquarters, the venue of the 10th NPT Review Conference, Mayors for Peace also hosted an Atomic Bomb Poster Exhibition, aiming at building momentum for achieving a peaceful world free of nuclear weapons.

Representing the Mayors for Peace network, Vice President Taue delivered a speech at the NGO presentations session. He stated that what prevented another Hiroshima and Nagasaki from happening for the past 77 years is the hibakusha’s long-standing call for the abolition of nuclear weapons—which has resonated throughout the world, raising awareness of their inhumanity. Nevertheless, decades of such effort can be undone if just one nuclear-weapon state decides to use all of its power to tyrannize other states, he continued. He then addressed the complementarity of the TPNW with the NPT, appealing that the two treaties reinforce each other and that they both are integral for international society to realize a world without nuclear weapons.

He also expressed the determination of Mayors for Peace, to continue striving for a world without nuclear weapons. He closed his statement by imparting a message: May Nagasaki be the last wartime atomic bombing site.