Excerpts from a press release of the United Nations

The United Nations Secretary-General António Guterres arrived in Hiroshima  from New York on the evening of Friday, 5 August.

On Saturday, he spoke at the Hiroshima Peace Memorial Ceremony, which aims to console the souls of those lost to the atomic bombing, as well as pray for the realization of lasting world peace.  In his remarks, the Secretary-General underscored that nuclear weapons are nonsense  and called on countries to work urgently to eliminate the stockpiles that threaten our future. 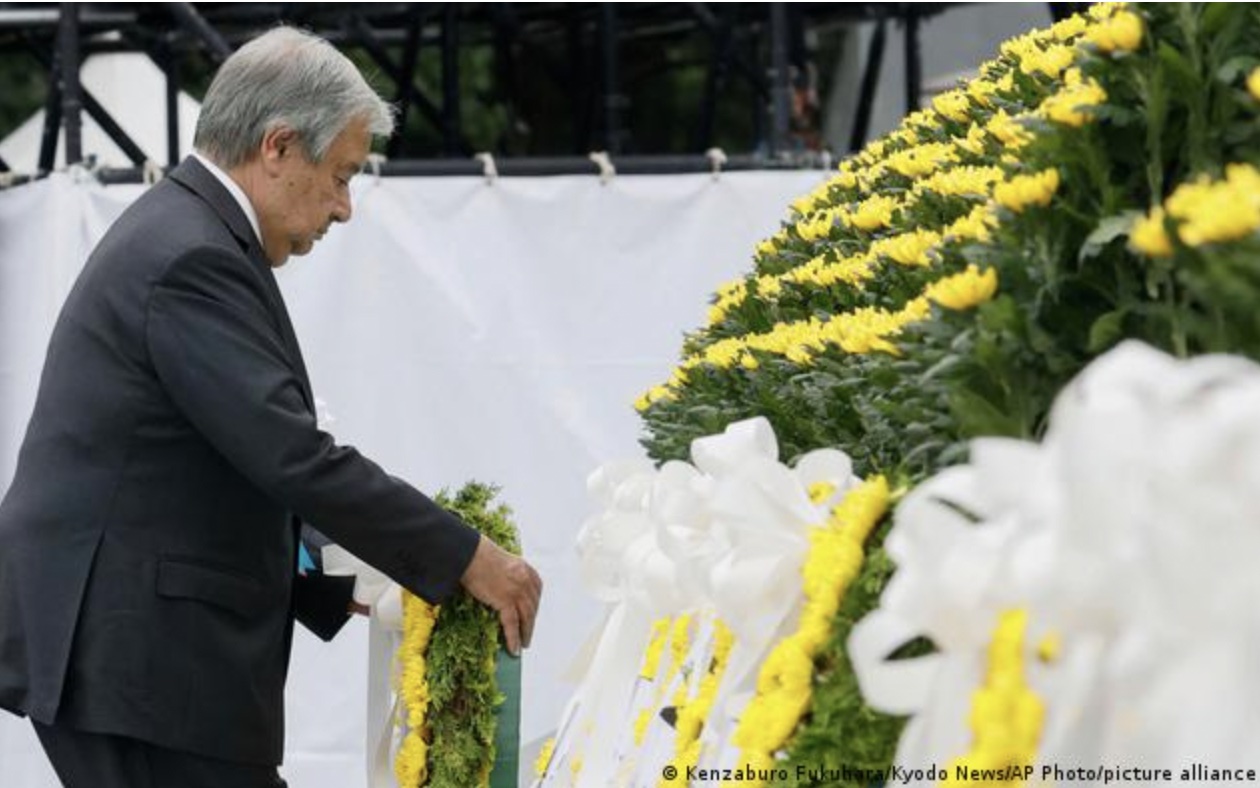 The Secretary-General said his message to leaders is simple:  Stop flirting with disaster.  Take the nuclear option off the table — for good.  [See Press Release SG/SM/21401]

After the ceremony, he met with Prime Minister of Japan, Fumio Kishida, with whom he discussed issues in the region including the situation in the Korean Peninsula and Japan’s efforts to tackle climate change, among others.  After their meeting, the Prime Minister gave the Secretary-General a special tour of the Peace Museum, and they then signed the museum’s guestbook.
(continued in right column)

Following the tour, the Secretary-General met with a group of survivors of the atomic bomb, known as the hibakusha, who shared their experiences with him.

This encounter was followed by a meeting with the Mayors of Hiroshima and Nagasaki  who bestowed upon him a special honorary citizenship.  Accepting this honour, the Secretary-General said that it is impossible for people to come to Hiroshima and not to feel the absurdity of the existence of nuclear weapons, and that he accepted this honour on behalf of all those working for a nuclear weapons-free world and in the memory of those tens of thousands of people who were killed in Hiroshima and Nagasaki 77 years ago.  [See Press Release SG/SM/21402]

He then held a press encounter  in Hiroshima and told reporters that the world is in danger of forgetting the lessons forged in this city 77 years ago.  He added that it is unacceptable for states in possession of nuclear weapons to admit the possibility of nuclear war.  He stressed that we must use every avenue of dialogue, diplomacy and negotiation to ease tensions and eliminate the nuclear threat.

The Secretary-General also met with the Hiroshima Governor, Hidehiko Yuzaki, and then took part in a dialogue with young activists who are leading initiatives on nuclear disarmament and non-proliferation.  He emphasized the importance of young people speaking up for nuclear disarmament and keeping the memory of the impacts of the bombings alive.  This was followed by an interview with the national broadcaster NHK at the United Nations Institute for Training and Research (UNITAR) offices.  He then met and took pictures with the UNITAR staff members.