On July 19, The Hill (which goes to most US congressional offices) published Nuclear strategy and ending the war in Ukraine, a very interesting article by Oscar Arias, Nobel Peace Laureate and former President of Costa Rica; and Jonathan Granoff, President of the Global Security Institute, a co-founding organization of UNFOLD ZERO. 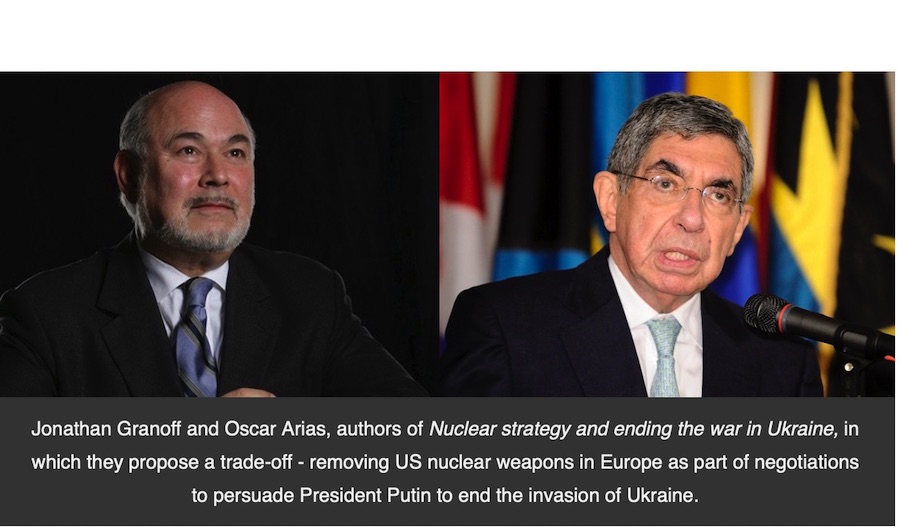 Mr Arias and Mr Granoff propose that the United States and NATO “plan and prepare for withdrawal of all U.S. nuclear warheads from Europe and Turkey” as a way to “get Putin’s attention and bring him to the negotiating table” and possibly agree to end the war.

It’s a very interesting and bold proposal that could possibly work. It would allow Putin a way to end the invasion by claiming domestically (to Russians) that he had scored a victory – the elimination of US nuclear weapons in Europe. At the same time it would not diminish the security (or perception of security) NATO countries ascribe to nuclear deterrence, as such deterrence does not rely on the US nuclear weapons currently based in Europe.

According to the two authors “NATO’s nuclear arsenal failed to deter Russia’s invasion of Ukraine and has almost no utility as a weapon of war. But NATO’s nuclear weapons can still be put to good use, not by threatening to launch them and escalate the war, but by withdrawing them to make room for new negotiations and eventual peace.”