Former guerrillas, victims and public forces have created dialogue tables and worked together on local projects that provide reparation for the damages caused by the war. They are working on restorative actions in advance, before the JEP imposes its own trials. (The JEP, Jurisdicción Especial para la Paz, was established by the Peace Accords.) 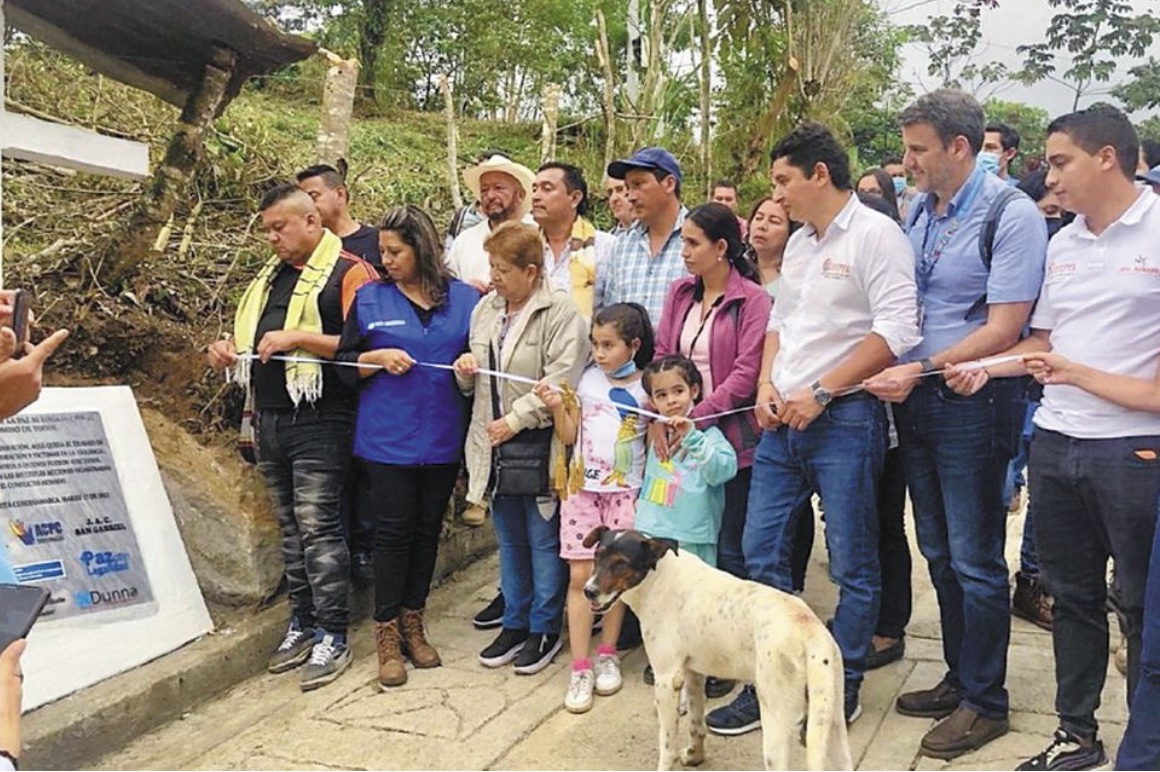 The armed conflict in Viotá (Cundinamarca) left traces of terror that, over the years, have eaten away at the dreams of thousands of families. The 22nd and 42nd fronts of the extinct FARC settled there in the 1990s, making this municipality one of their most important strongholds in the Andean region around Bogotá. Entering the new millennium and for nearly four years, the Peasant Self-Defense Forces of Casanare also entered this area and tried to take control through extortion, murder and forced disappearance.

The result of the violence unleashed by these two armed groups was a balance of 12,903 victims registered by the Victims Unit. In the files of the Attorney General’s Office and the Justice and Peace courts themselves, the cases of more than 113 people considered missing were documented, of whom little or nothing was known over the years.

Even without knowing many truths about their loved ones and after a long time without being listened to by the State to seek justice, the people of Viotá have learned to forgive and see the construction of peace as the central element of their life in community. When the former FARC signed peace in 2016, the vast majority of ex-combatants who operated there stayed to complete their reincorporation process into civilian life, according to the Agency for Reincorporation and Normalization (ARN).

“The case of Viotá is rare, because the normal thing in other territories where thousands of people laid down their arms was for the former guerrillas to go to other departments where no one knew them from the past, to start a life from scratch. However, in Viotá they decided to face their crimes, live with their usual neighbors to whom they did so much harm and chose to show them that in their own home they could successfully advance a model of collective reconciliation,” said Natalia Quiñones, co-founder of the Dunna Corporation, an organization that accompanies innovative alternatives for peace in various areas of the country.

Dunna has been very close to the processes of dialogue and reconstruction of the social fabric in Viotá. There, with the support of the Embassy of the Netherlands, the Bolívar Davivienda Foundation, the Mayor’s Office and the Cundinamarca Agency for Peace and Coexistence, they managed to establish dialogue among those appearing before the Special Jurisdiction for Peace (JEP) of the ex-guerrilla with its victims, members of the public force and other inhabitants, in order to carry out restorative exercises and healing activities for the mind and body, in order to overcome the traumas and emotional discomfort left by the war.

“We have known each other forever. Now they are my neighbors and I sell them vegetables and pig feed. We do not forget what they did to us, but we accept their repentance,” said a resident of Viotá who has participated in the process.

“We have an interdisciplinary team of psychologists, yoga teachers, psychiatrists, political scientists, lawyers, sociologists and anthropologists who have been working on the development of the Viotá program to generate a reconciliation model that can be replicated at the national level. Our results there showed that 100% of those who received our attention had significant changes in trust, reciprocity, stigmatization and collective efficacy. The exercises of dialogue, restorative circle and mind-body strategies were able to reduce distrust and bring together the inhabitants of the community to address the present and the future that the community faces collectively.

In other projects with similar protocols, Dunna has obtained satisfactory results in terms of post-traumatic stress and mental health, showing that this type of model can help between 91 and 94% of the participants to successfully overcome mental health risks. derived from the trauma and to achieve emotional well-being”, added Quiñones.

In Viotá they learned to forgive with the formula of action without harm: nothing that is done on the ground or any gesture or word that is said in the spaces of dialogue and listening should re-victimize anyone. However, a feeling shared by the victims and perpetrators of the war in Viotá is that words alone are not enough to repair the many atrocities that were experienced.

In Viotá, the encouragement to compensate crimes against humanity and give dignity to the survivors has been a constant. It has been channeled into collective reconciliation through cooperative projects of infrastructure and memory.

The voices of peace prevail and one of them is that of José del Carmen Viracachá, a peace signer who lives in this area. Ten years ago he was convicted of war crimes and he now understands that a custodial sentence is not the best way to pay tribute to those who have suffered so much in the past. He said in an interview, “We want to make and export peace through example. Forgiveness is valuable, but it must be accompanied by concrete actions that serve people and so that they see our repentance and our commitment not to repeat anything bad. Confinement almost never fixes anything; that’s why I think that the harshness of the past must be addressed directly.

Prison as the ultimate goal for those who committed crimes in the context of an armed conflict according to the Statutory Law of the Special Jurisdiction for Peace (JEP), enacted three years ago, on June 6, 2019.

An acronym appears in the document that will be talked about frequently in the coming months: the TOAR (Works, Works and Activities with Restorative content).
The Peace Agreement stipulated two types of TOARs to be developed at different stages of the post-conflict. On the one hand, there are the TOARs that are a consequence of the imposition of the JEP’s sanctions; these do not yet exist, because the court has not yet issued any ruling. They will be imposed in the cases of macro-cases 01 (taking of hostages and other serious deprivations of liberty) and 03 (extrajudicial executions). In these cases restorative activities will be required, as long as those appearing comply with the conditions of the Statutory Law; that is to say, tell complete truths, give guarantees of non-repetition and dignify their victims.

On the other hand, and returning to the case of Viotá, there are the anticipated TOARs, which consist of carrying out restoration activities (infrastructure works, construction of monuments, demining tasks or literacy tasks, among others) in advance of any imposed sanctions. These anticipated TOARs honor the rights of the victims and obtain discount benefits from a restrictive sentence of freedom when it is imposed. These restorative activities must have the endorsement of the Executive Secretariat of the JEP. During 2021, the JEP jurisdiction followed up on 64 of these projects in various departments.

During the dialogue sessions that Dunna led with the actors of the conflict in Viotá, several options were discussed for collective work to promote the historical memory of the town. What do we need to see on our streets to feel represented and respected after the conflict? How to advance a work or activity that is not forgotten by future generations? Those were some of the questions raised among the people of Viotá, who also had to take into account in order not to be frustrated that any project they thought of had to be in harmony with the development plan of the town and subject to the economic capacities of the municipality, which ultimately must pay for the expenses.

“The most difficult task was to first seek funding before putting the TOARs on everyone’s lips. The priority, of course, is to choose something that the community wants and sees in it a symbolic and restorative content; Luckily, a consensus was reached and the people were able to prioritize projects that their municipal administration could afford to pay. Viotá’s dignity is the goal and remembering those who no longer with us was the most beautiful”, explained Natalia Quiñones.

That was how all eyes were directed to the path of San Gabriel. The Viotá cemetery is located there, to which paradoxically they could not take their dead, due to the precarious access roads. The surrounding streets were destroyed, so the cemetery was not accessible. This was a headache, especially during the years of conflict and in the covid-19 pandemic.
To address this situation, peace signatories, victims, public forces and citizens built a 68-meter-long path, with which they managed to give a new face to an iconic area for this town and a sign of honor to the dead who the war took and that for so many years they could not visit as they wanted.

On March 17, 2022, the United Nations Verification Mission in Colombia announced the completion and delivery of the work to open the path of San Gabriel. This marked the closure of a cycle in which Viotá does not want to repeat again, especially since it was a war that they never looked for and never understood, but that completely penetrated their homes.

“This project not only benefits the people of San Gabriel; it also serves for reconciliation. The cemetery has always had a special importance and thanks to this we know that those who previously made us suffer now help us feel good about ourselves and about what we can do together towards the future”, said a resident of Viotá who preferred not to be named.

Now that the Viotá process is completed, Dunna is working in Fusagasugá and Venecia to replicate this model in Cundinamarca. They hope to expand the TOARs to more regions of Colombia and demonstrate that any peace is possible if in the communities there is a robust sense of belonging and a genuine willingness to forgive and not repeat harm.