The Pan-African Youth Network for the Culture of Peace, Gabon section (PAYNCoP Gabon) launched, on Wednesday August 03, in Oyem, in the north of Gabon, the project “Women’s Commitment to Health and Sanitation in the Province Woleu-Ntem”. 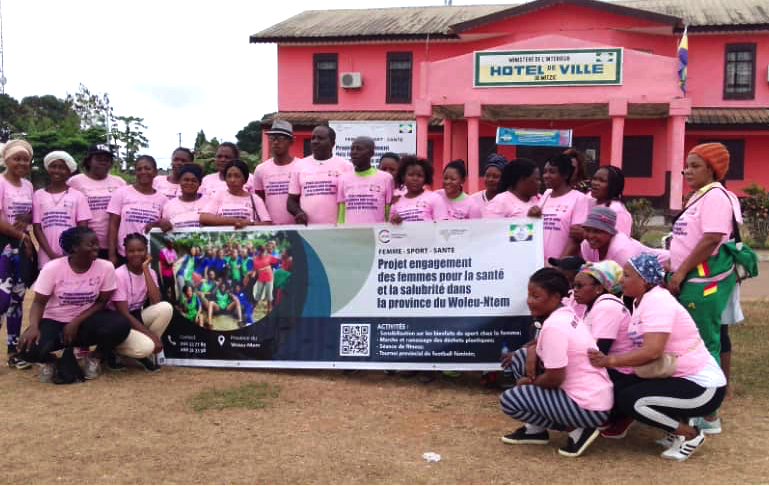 The initiative supported by the Conference of Ministers of Youth and Sports of the Francophonie (CONFEJES) and the Town Hall of the municipality of Oyem is part of a vast program of CONFEJES entitled Woman – Sport – Health .

Its general objective is to encourage women to practice physical and sports activities as well as environmental protection, according to Rachel Oyane, member of the project team.

The initiative, which targets 200 women in the province of Woleu-Ntem, is based on three main activities, in particular an awareness campaign on the benefits of sport for women, a walk with the collection of plastic waste, a fitness session and a provincial women’s football tournament which will engage women from Woleu-Ntem province in northern Gabon, said Jerry Bibang, the project coordinator.

After the launch in Oyem, our team will crisscross the municipalities of Mitzic, Minvoul and Bitam for the implementation of these various activities which primarily concern women who do not have regular physical and sports activity, explained Jimmy Thalès ONDO, also a member of the project team.

The objective is to get them to understand the benefits of sport, in particular the fight against certain diseases, but also the need to keep their environment clean, hence the activity of walking and collecting plastic waste.

For the Town Hall of Oyem, represented by the 4th deputy mayor, Mrs. Angue Owono Françoise, the initiative is in line with the vision of the municipal council of the town of Oyem which is to make the provincial capital of Woleu-Ntem a beautiful town. and clean, in accordance with the will of the highest authorities of the country. This project is a real opportunity to encourage women to get involved in the fight for healthy lifestyles and for the practice of physical and sports activities. The town hall, under the leadership of Mayor Christian Abessolo Menguey, will reflect on how to continue these activities even beyond the project, she said.

The implementation of this project follows a call for applications, launched by CONFEJES to public organizations and civil society at the pan-African level. Out of 79 applications, only 14 were selected. The PAYNCoP Gabon project was ranked 4th best project by an international jury.