Protests—some of them massive—in defense of democracy and education and against far-right President Jair Bolsonaro’s coup-mongering were held in cities across Brazil Thursday, less than two months before the first round of the South American nation’s presidential election. 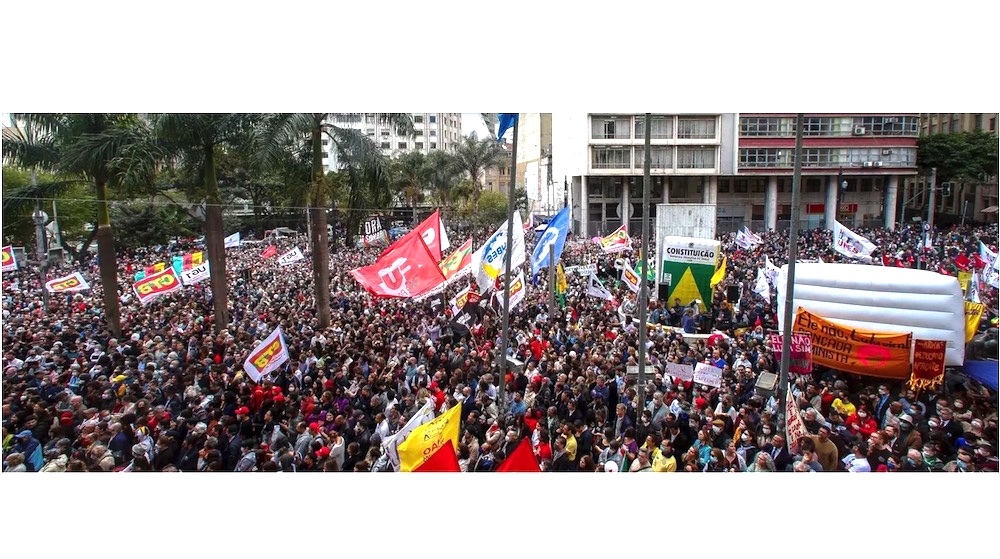 A massive pro-democracy demonstration takes place at the University of São Paulo School of Law in São Paulo, Brazil, on August 11, 2022. (Photo: Miguel Schincariol/AFP via Getty Images)
Click on image to enlarge

Demonstrations took place in at least 23 of Brazil’s 26 state capitals, as well as in the national capital of Brasília. Many of the protests featured readings of a pair of pro-democracy manifestos, including the “Letter to Brazilians in Defense of Democracy and Rule of Law.”  The missive, which has been signed by nearly one million people, was inspired by a similar 1977 document that helped bring down a 21-year, U.S.-backed military dictatorship admired by Bolsonaro, who served in its army.

During the reading event at the University of São Paulo (USP) School of Law—where large banners read “dictatorship never again” and “state of rights, always”—presidential candidates spoke out in defense of Brazil’s electronic voting system, which has been the target of baseless allegations of fraud by Bolsonaro and his allies. The right-wing president, who is pushing for paper ballots, has threatened  to reject the results of October’s first-round presidential election if he loses under the current electronic voting system.

“[This is] what the Brazilian people should have,” da Silva added. “Our country was sovereign and respected. We need to get it back together.”

Bolsonaro mocked the massive nationwide rebuke of his rule, tweeting  that “today, a very important act took place on behalf of Brazil and of great relevance to the Brazilian people: Petrobras once again reduced the price of diesel.”

A broad range of leftist activists spoke at and about the demonstrations across Brazil.

“Running over democracy is not as simple as the militiaman imagined,” tweeted Ivan Valente, leader of the Socialism and Liberty Party (PSOL) in Brazil’s Chamber of Deputies, the lower house of Congress. “Bolsonaro is much closer to jail than to the coup… Brazilian society does not accept setbacks or coup bravado.”

Beatriz Lourenço do Nascimento of Black Coalition for Rights—one of the few Black faces in the room during the USP reading—recited  her group’s anti-racist manifesto during the event.

“Brazil is a country in debt to the Black population,” she asserted. “We call on the democratic sectors of Brazilian society, institutions, and people who today show emotion over the ills of racism and claim to be anti-racist: Be consistent. Practice what you speak. As long as there is racism, there will be no democracy.”

“We are in the process of building this broad front, representing all Brazilians who defend democracy,” he continued. “Democracy involves changing the government and eliminating neo-fascism, but above all, ensuring that the working class, the people, have the rights guaranteed in the Constitution. Right to work, income, land, education, health.”

“Today’s act is just the start of a great journey of activities centered around 200 years of Brazilian independence,” Stédile added, referring to Brazil’s bicentennial on September 7. “We are organizing to continue with demonstrations and mobilizations, especially in the week of September 7th to 10th, when we take to the streets to defend democracy, sovereignty, and the Brazilian people.”