The following is the full text of the Peace Declaration read on Aug. 6 by Hiroshima Mayor Kazumi Matsui at a ceremony to mark the 77th anniversary of the atomic bombing of the city. 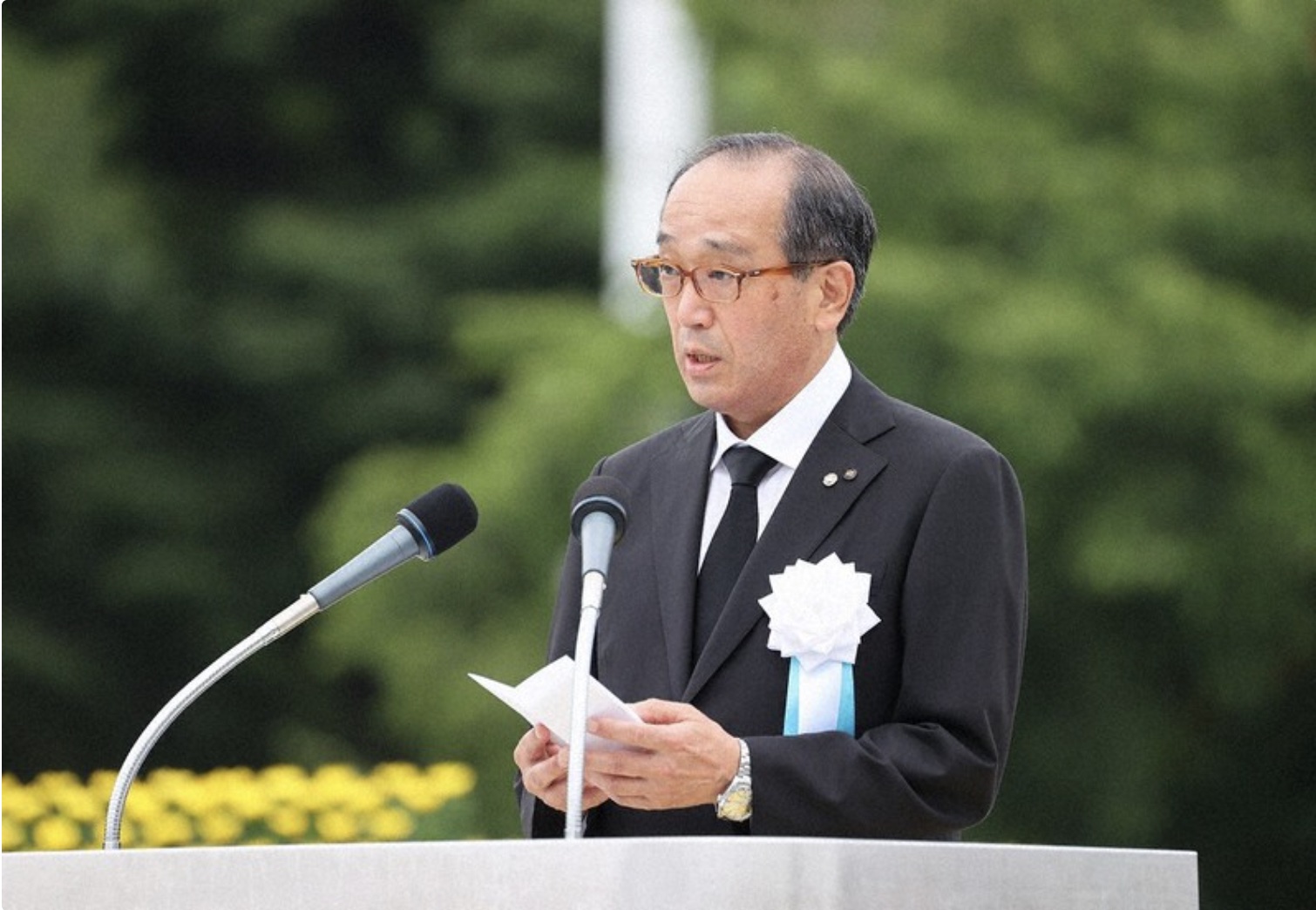 Hiroshima Mayor Kazumi Matsui delivers the Peace Declaration during the memorial ceremony on the 77th anniversary of the atomic bombing of the city, at Peace Memorial Park in the city’s Naka Ward, on Aug. 6, 2022. (Mainichi/Daiki Takikawa)

“I adored my mother; she raised me with such kindness and care.” The woman speaking was 16 when she left home carrying the lunch her mother had lovingly prepared. She never imagined it would be their final parting. Summer, 77 years ago. That morning, without warning, the first nuclear weapon was dropped and detonated over humanity. Standing near Hiroshima Station, the girl saw a terrifying flash. Then came a thunderous roar. Striking from behind, the blast blew her through the air and knocked her unconscious. When she came to, she wandered through the smoldering city, searching for her mother. She saw a horrifying number of blackened bodies. One charred corpse still stood, clinging to the neck of a cow. Bodies floating in the river drifted up and down with the tide. She still remembers the morning when everyday life vanished violently into scenes from hell.

In invading Ukraine, the Russian leader, elected to protect the lives and property of his people, is using them as instruments of war, stealing the lives and livelihoods of innocent civilians in another country. Around the world, the notion that peace depends on nuclear deterrence gains momentum. These errors betray humanity’s determination, born of our experiences of war, to achieve a peaceful world free from nuclear weapons. To accept the status quo and abandon the ideal of peace maintained without military force is to threaten the very survival of the human race. We must stop repeating these mistakes. Above all, entrusting a nuclear button to any world leader is to sanction continued nuclear threats to humanity and potential re-creation of the hellscape of August 6, 1945. We must immediately render all nuclear buttons meaningless.

Must we keep tolerating self-centeredness that threatens others, even to the point of denying their existence? We should take to heart the words of Leo Tolstoy, the renowned Russian author of “War and Peace,” who advised, “Never build your happiness on the misfortune of others, for only in their happiness can you find your own.”

Earlier this year, the five nuclear-weapon states issued a joint statement: “Nuclear war cannot be won and must never be fought.” They further declared their intent to “…remain committed to our Nuclear Non-Proliferation Treaty (NPT) obligations.” Having issued such a statement, why do they not attempt to fulfill their promises? Why do some even hint at using nuclear weapons? The nuclear powers must act now to build bridges of trust among nations. Rather than treating a world without nuclear weapons like a distant dream, they should be taking concrete steps toward its realization. I call on the leaders of the nuclear-weapon states to visit the atomic-bombed cities where they can personally encounter the consequences of using nuclear weapons and strengthen their will to take these steps. I want them to understand that the only sure way to protect the lives and property of their people is to eliminate nuclear weapons. I fervently hope that the leaders who attend the G7 Summit in Hiroshima next year will reach this conclusion.

With the hibakusha’s (A-bomb survivors’) will to peace at our core, and inheriting the “never-give-up” spirit of hibakusha leader Tsuboi Sunao, who dedicated his life to the cause, Hiroshima will continue striding toward nuclear weapons abolition, however arduous the path.

Mayors for Peace, now a network of 8,200 peace cities around the world, will hold its 10th General Conference in Hiroshima this year. That conference will work toward a civil society in which each and every citizen shares the conviction that happy lives require an end to war, an end to armed conflict, and an end to life-threatening social discrimination. In that pursuit, we will intensify cooperation among our peace-minded member cities to promote a “culture of peace” that rejects all forms of violence. Mayors for Peace encourages policymakers to pursue foreign policies through dialogue without relying on nuclear deterrence.

This past June, the First Meeting of States Parties to the Treaty on the Prohibition of Nuclear Weapons (TPNW) adopted a declaration that, against the backdrop of the Russian invasion, categorically rejects the threat of nuclear weapons. With nuclear weapons-dependent states participating as observers, the meeting specifically stressed that the TPNW contributes to and complements the NPT. Therefore, I demand first that the Japanese government serve as mediator at the NPT Review Conference. Then, Japan must participate in the next Meeting of States Parties to the TPNW, promptly become a State Party itself, and wholeheartedly support the movement toward nuclear weapons abolition.

The average age of the hibakusha now exceeds 84, and their lives are still impaired by radiation’s adverse effects on their minds and bodies. Thus, I further demand that the Japanese government empathize with their suffering to better offer them enhanced support measures.

Today, at this Peace Memorial Ceremony commemorating 77 years since the bombing, we offer heartfelt condolences to the souls of the atomic bomb victims. Together with Nagasaki and likeminded people around the world, we pledge to do everything in our power to abolish nuclear weapons and light the way toward lasting world peace.