The government of Xiomara Castro launched yesterday in Santa Bárbara the “Mesas de seguridad ciudadana” within the framework of the Community Police, which will be in the 298 municipalities made up of members of the National Police, civil society, private companies, non-governmental organizations, judges and fiscal authorities.

(Editor’s note: A “mesa de seguridad ciudadana” is a governance network that brings together citizens with authorities from all levels of government in the construction of a common agenda on security and justice. Through dialogue and collaboration, it builds agreements and defines action measures of local scope. Citizens exercise co-responsibility by participating in the preparation of the agenda and following up on the agreements. The work model of the “Mesas de seguridad” prioritizes a horizontal organization, similar to that of restorative justice.) 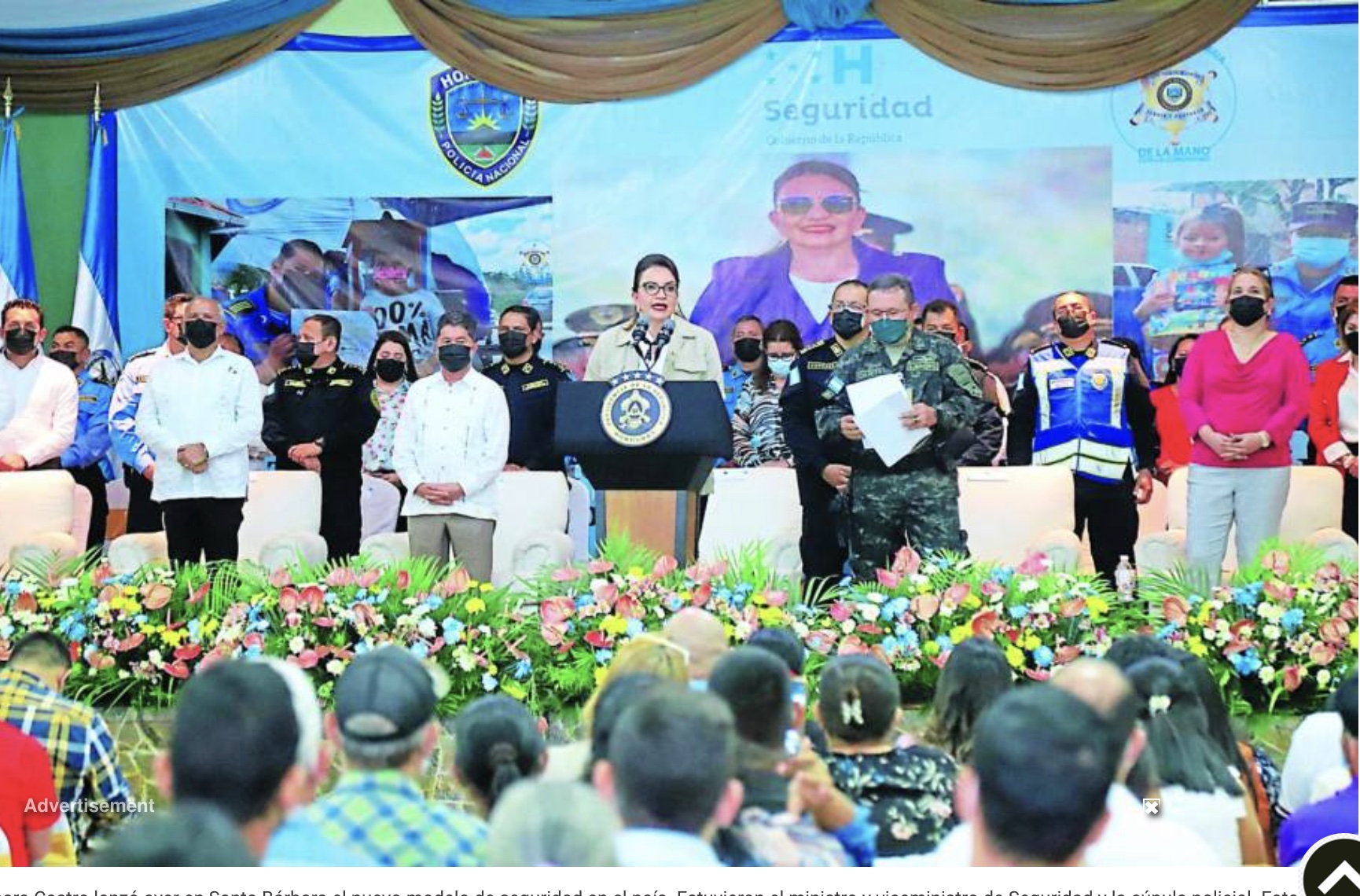 President Xiomara Castro launched yesterday in Santa Bárbara the new security model for the country. The Minister and Deputy Minister of Security and the police leadership were present. Photos: Franklyn Munoz.

According to the authorities of the National Police, the Community Police model is not new, since it already existed, but now it seeks to create a stronger link with citizens and the habit of reporting, as well as creating and developing programs that collaborate in the prevention and deterrence of crime.

This new security strategy involves five pillars, according to the police leaders:

*return to the community,

*and the creation of a new public security institution.

This security model of the Castro government includes the community police officers carrying out social surveillance in the intervened neighborhoods and the Military Police combating the maras and gangs through their crime deterrence techniques.

“Now we have to put it into action and put it into practice, we must attend to all the needs that arise within a social group and with the participation of all, and how the Government can collect all the data and translate it into benefits for society,” explained Ramón Sabillón, Minister of Security.

The president of the republic, Xiomara Castro, pointed out in her speech that prevention policies “in our country are necessary, especially to reduce the levels of insecurity that we have inherited. In the past we have acted in the cases of homicides and delinquency, but now the most important action must be prevention in our communities and our peoples, which has not previously been addressed.

The president said that the actors will be the “patronatos”, the water collectives, the associations of peasants, farmers, ranchers and neighborhood collectives.

“I want to promote a culture of peace and citizen participation in our country with preventive actions, establishing bonds of trust and proximity between the Police and the community. The proximity of the police with the people is the main asset that the Community Police needs in orde to fulfill this new role that is assigned today,” Castro said.

The director of the National Police, Gustavo Sánchez, said that violence and criminality have generated 65,000 homicides in the last 12 years “due to their poor treatment and poor approach.

The launch of the Community Police with the strategy of “mesas de seguridad ciudadana” seeks the participation and co-responsibility of citizens”.

“There will be a more timely, effective and respectful service, including for the offender who will be referred to the courts or to the competent bodies,” said the director of the Community Police, Germán Sánchez.