An article from France24 (translation by CPNN)

Colombians voted May 29 and set up a second round between the leftist Gustavo Petro, who promises generous social programs, and Rodolfo Hernández, an eccentric business magnate. In its history as a democratic republic, Colombia has never been governed by a leftist executive. This is the year it is possible, but with Hernández in the ballot, who will receive the support of the majority of the votes of the other candidates, the path becomes difficult.

Gustavo Petro, head of the Historical Pact, won this Sunday, May 29, in the first round of the presidential elections and will face a surprising candidate in the second round, on June 19: businessman Rodolfo Hernández. 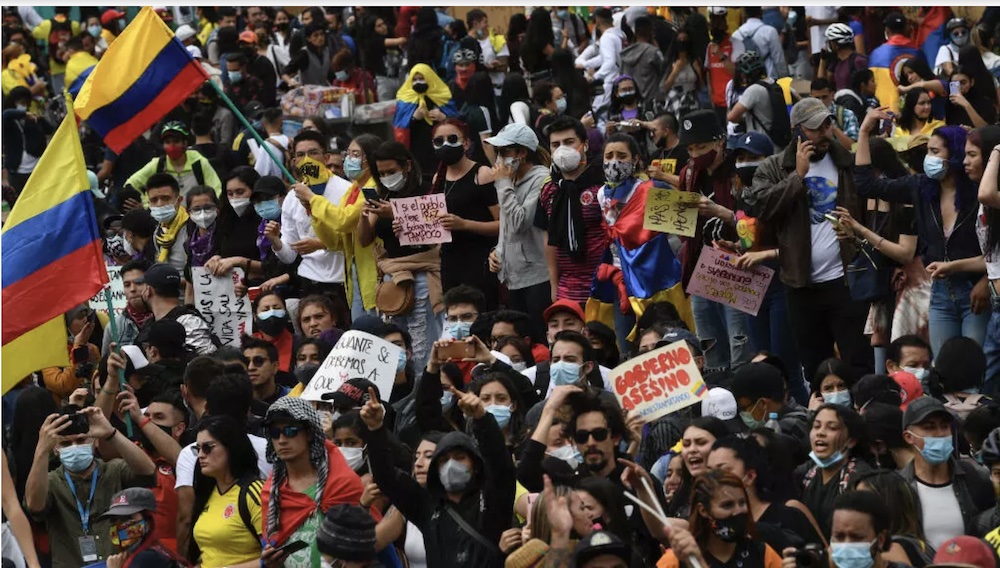 In the first election, the vote of the youth was key, of which a large part participated in the protests that shook the country last year. © Juan Barreto / AFP

Petro, an active politician and former member of the M-19 guerrilla movement, obtained 40.3% of the votes according to the pre-count of the National Registry. Rodolfo Hernández, for his part, former mayor of the city of Bucaramanga, obtained 28.1% of the vote, leaving the right-wing candidate, Federico Gutiérrez, who for weeks remained as the second option in the polls, outside the final contest.

A historical milestone for Colombia

A definitive victory for Petro would be a paradigm shift: the possible arrival of the left to power in Colombia as an a historical fact.

In the Andean nation, the majority governments of the right and even the extreme right succeeded each other for decades. “The left has always been marginal, unlike other countries in the Southern Cone, which have a leftist tradition with more electoral success,” explains Miguel García, professor of Political Science at the Universidad de los Andes, to France 24.

However, the left has gained strength in the country in recent years. Petro’s candidature was supported, above all, by Colombian youth, who demand changes and an improvement in living conditions. In fact, that request was shouted for months last year in the streets of Colombia, during an unprecedented National Strike.

Young people are a key demographic for Gustavo Petro, who has close to 50% support among voters in that age group. The leftist systematically led the opinion polls for his promises to redistribute pensions, offer a free public university and change what, according to him, are centuries of deep inequality, but he was about 10% away from dodging a run-off ballot, far from the most optimistic forecasts, which were as high as 46%.

The victory of Petro, who is running for the third time in an election, would mean, according to Miguel García, “the triumph of a highly critical discourse towards the structures that have traditionally governed Colombia. It would be the rejection of a society based on inequality and symbolic hierarchies”.

However, the results of the first round do not mean that the game is won for Petro because the radical past of Petro weighs heavily in the debates and public opinion, and furthermore, his electoral rival prevents him from making a speech as polarizing as he would like.

The other strong criticism of the candidate is the supposed future collapse that his victory would mean for the Colombian economy. His main opponent, Federico Gutiérrez, warned, for example, that the leftist’s economic plans, which include a ban on new oil and gas projects, would, according to him, ruin the country.

For his part, Petro has rejected repeated accusations that he will imitate the policies of the late former Venezuelan President Hugo Chávez and his successor Nicolás Maduro.

Regarding this repeated comparison between the current Venezuela and a Colombia governed by the left, the expert Miguel García maintains: “I think that the possibility exists. But with what probability? There is also the probability that an asteroid will fall and the earth will disappear … However, I think those fears are a bit unfounded. Petro represents a lot of uncertainty, to be sure, but not of this kind.”

Throughout an electoral campaign plagued by controversy and accusations, many analysts agreed on one point: the most difficult scenario for Petro would be a second round against the populist Rodolfo Hernández.

And it turns out that the construction tycoon obtained this Sunday 28.1% of the votes. The septuagenarian has surged in the polls in the past two weeks, buoyed by his colorful social media presence and anti-corruption promises.

Hernández himself, 77, is facing an ongoing investigation into his alleged intervention when he was mayor of Bucaramanga that benefited a company for which his son was lobbying, something he has repeatedly denied..

In the second round, Hernández could count on the support of a broad ‘anti-petrista’ front: “He represents that conservative modernization so particular to Colombia, which does not question the status quo, but rather the political class and corruption. He is the perfect incarnation of the outsider Latin American who says what he thinks. He has a confrontational and authoritative discourse, willing to put an end to the great evils of the country. A mixture of Trump and Bolsonoro.”

But if he wins, the septuagenarian will not have an easy way to govern. Professor Garcia describes a possible scenario of confrontations with the entire Congress: “Hernández does not have a single legislator! In the legislative chambers the left has unprecedented terrain. He would have to approach the center-right sectors, which are precisely the object of his criticism”.

And he adds: “Trying to govern without Congress in Colombia is not easy. We have a very effective coalition tradition, and we have never seen that type of dispute.” On Petro’s side, the analyst speaks of a more feasible way to form a coalition, in addition to having a large part of Congress on his own political side.

The big loser of the day was Federico Gutiérrez. The former mayor of Medellín, from the right and the candidate most enlisted in official politics, obtained 5,054,993 votes, equivalent to 23.91% of the total votes. Although the opinion polls had predicted him as a candidate for the presidency in the second round, the conservative candidate did not detach himself from the accusations of being an ideological successor to the unpopular president Iván Duque and former president Álvaro Uribe, something that he wanted to distance himself from, without success. .

“His defeat reflects the defeat of a mediocre government, which was never linked to the citizenry, which always took the opposite side. The example of last year’s protests is enough: Faced with clear violations of human rights, the president preferred to wear a police jacket,” says Miguel García. And indeed, President Iván Duque is finishing his term with a disapproval that exceeds 67%.

Between these two candidates who claim a break, the next three weeks, until June 19, both will offer a tug-of-war between two proposals for change. The final decision will be made by the Colombians, who this Sunday said yes to the change, but it is not known exactly which one and in what direction.