The World Social Forum 2022 (WSF) began yesterday (May 1) with a march from the Monument to the Revolution to the capital’s Zócalo in CDMX (Mexico City), joining with the May Day March for International Labor Day. 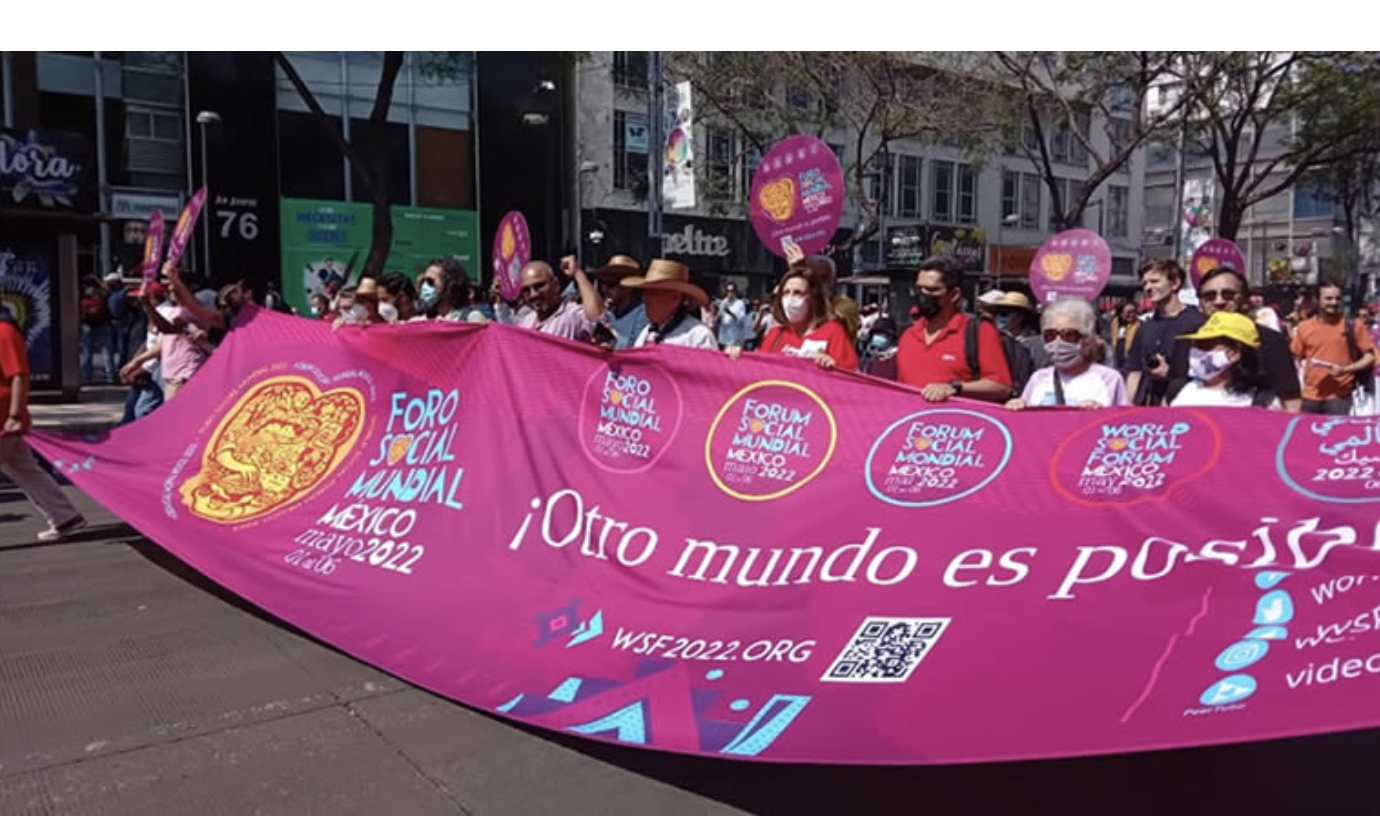 After the march, the activities of the WSF moved to the Plaza de Santo Domingo, a few meters from the Zócalo, where a Nahuatl ceremony was held and a manifesto was read by three women, one from Cherán, Michoacán, and the other from Tunisia. and one from Palestine.

The WSF seeks to generate proposals and exchanges of organizations and social movements opposed to neoliberalism and all forms of capitalist and imperialist domination. This year CDMX has been the venue in a hybrid format, with face-to-face and virtual activities.

Participants from India, Ukraine, Palestine, Tunisia, Kurdistan, Morocco, Colombia, Argentina, Brazil, Canada, as well as trade unionists from Mexico, solidarity economy groups and members of indigenous peoples began activities (which conclude on May 6) in several venues of the Historic Center, including the Plaza Santo Domingo, the Universidad Obrera, the City Museum, the Rule and the Museum of the City.

In Plaza Santo Domingo, the Social and Solidarity Economy dialogue tables were installed with around 100 producers, five urban gardens, eco-technologies, dry toilets and with the circulation of the Alegría solidarity currency. In addition, the tents of Palestine and Kurdistan were installed.

Solidarity, community or complementary currencies have become a practice that some of the members of the WSF have used to break with the use of official money, which they consider to be based mainly on a model of debt money.

For this edition of the WSF, 21 years after the first forum in Porto Alegre, Brazil, a solidary lodging network was established where the majority of foreigners have stayed without generating excessive expenses.

Other venues that will host the hundreds of activities of the WSF are the Corpus Christi Temple, the School of Public Administration, the Historical Center Trust, the Mining Palace, the Palace of Autonomy, the auditorium of the Mexican Union of Electricians and that of Section 9 of the National Coordinator of Education Workers.
_______________

The public debt and the abolition of debts acquired illegitimately, in particular due to the abusive payment of interest, are at the center of the second day of activities of the World Social Forum (May 2).

This section is held in the Ernesto Velasco Torres auditorium, of the Mexican Union of Electricians (SME), in conjunction with the New Workers Central and other labor institutions.

It is part of the theme Economic Alternatives for the Peoples and Socioeconomic Justice, and includes the study of the indebtedness processes in Latin America and the Caribbean and the struggles against illegitimate debts in Puerto Rico and Argentina.

It also addresses the vision of Latin America in the face of the fall of the dollar and its effects, the universal basic income as the foundation of another possible world, as illustrated with pilot tests in Catalonia and debates in Argentina. The presentation is carried out by the Humanist Network for Universal Basic Income.

On the same economic theme, the Kgosni group will present “Túmin, beyond a community currency” a reflection on the reconstruction of the social fabric and the importance of one’s own means of communication, as part of the economic alternatives of the peoples and socioeconomic justice.

Another basic point of the day is the one related to community feminism presented by Abya Yala in which she analyzes the struggles against discrimination, racism and for self-determination, as well as what women describe as a battle against patriarchy and heteronormative .

A very specific issue is that of resistance against the struggle for search, truth and justice for disappeared relatives in the “Dirty War” period of the 60s, 70s and 80s of the last century in the Mexican state of Guerrero, but related to today, especially the Movement for Truth and Justice for Relatives of Disappeared Persons.

The exhibition, which takes place in the Palacio de la Minería, one of the venues of the forum, is accompanied by a workshop on the disappearance of girls and women in Mexico under the title Community Feminism, organized by Abya Yala.

In this framework, a posthumous tribute will be paid to the Mexican social activist Rosario Ibarra de Piedra, who died last month.

Finally, another key point in this Monday’s session is the one entitled “Indigenous Migration in Mexico. Peacebuilding, migration and strategies against war. Comprehensive accompaniment from a feminist perspective for women on the move on the southern border of Mexico”, by the Red Mesoamericana Mujer, Salud y Migración.