This basin is home to biodiversity as well as an extremely valuable natural and cultural heritage. Rich and varied production systems built on diversified uses of space, as well as ancient local conventions, attest to the rational exploitation of natural resources. 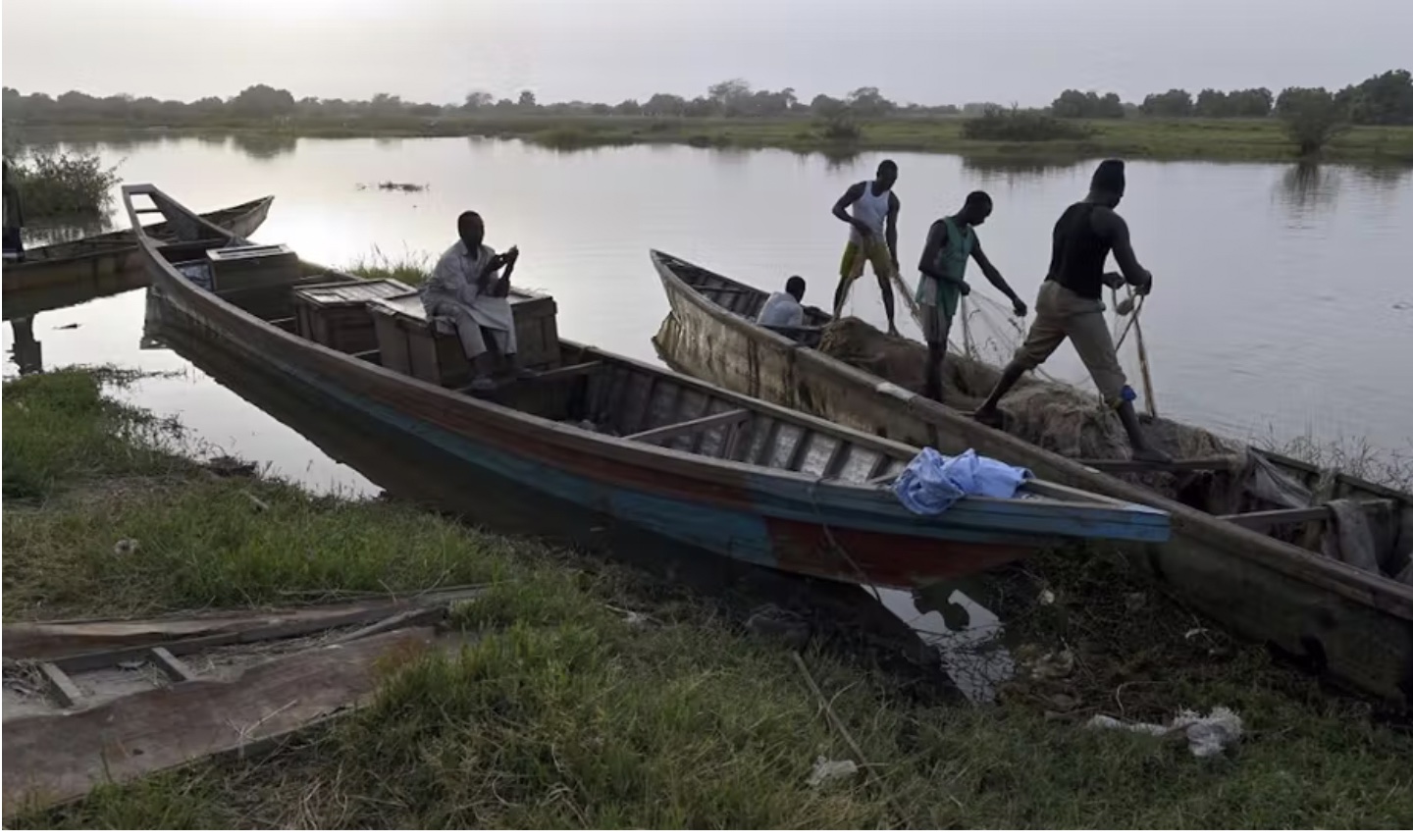 Fishermen on the shores of Lake Chad, in 2015 north of N’Djamena (Chad). PHILIPPE DESMAZES / AFP

For several decades, this area has unfortunately been plagued by an anthropo-ecological imbalance, to which must be added the climatic changes that began in the 1970s; these have led to a gradual drying up of the basin.

As a result, there is competition for the use of natural resources, exacerbated by armed conflicts orchestrated by the sect of Boko Haram that has engaged in illegal timber trafficking, poaching of protected species and agro-pastoral conflicts.
This situation leads to significant population migrations.

The challenges currently facing the Lake Chad Basin are three-fold:

– A security challenge for the restoration of peace and security in the countries of the Lake Chad Basin;

– an ecological challenge, with the conservation of biodiversity, the management of ecosystems and their rehabilitation;

– a socio-economic challenge, for the revival of agricultural, pastoral and fish farming activities, poverty reduction, participatory planning and inclusive governance.

To safeguard and sustainably manage the hydrological, biological and cultural resources of this area, contribute to poverty reduction and promote peace, the five states of the basin have decided to apply the model of transboundary “biosphere reserves” and sites of World Heritage.
It is with this in mind that Unesco, within the framework of the Biosphere and Heritage of Lake Chad (BIOPALT) project, has set itself the task of supporting the five States in the preparation of files for the nomination of national and/or transboundary biosphere reserves and a transboundary World Heritage site in the basin.

The various consultations – national, led by BIOPALT and regional, led by the Lake Chad Basin Commission (LCBC) – have made it possible to identify the major difficulties of the basin and the expectations of the communities in the face of these constraints.

To carry out these initiatives, the participatory approach was adopted. Its modus operandi is built on four main components: know, train and build capacity, rehabilitate and use sustainably, manage and enhance. Here, the various activities were carried out with the support of local and international partners.

The network of project partners is made up of scientists (mainly universities in the Basin, but also other international institutions), NGOs and associations. The work carried out is validated by a scientific and technical council.

A dozen studies on the Lake Chad Basin

From 2017 to 2021, thirteen studies were carried out on the biodiversity, hydrology, culture and socio-economic aspects of the basin. They have allowed a better knowledge of hydroclimatic risks, water quality, biological and cultural diversity and finally the variability and resilience to the climate of this space.

Two tools have been developed: a portal on water quality in the Lake Chad Basin and a flood and drought monitoring platform. These tools allow the control of pollution of the lake and its tributaries as well as the monitoring of meteorological hazards.

Four workshops – organized around the monitoring of floods and droughts, the monitoring of the water quality of Lake Chad and the establishment of a PHI Cameroon committee – have made it possible to train 90 experts.

Some 2,000 people have also been trained in the peaceful management of natural resources, conflict prevention and the sustainable conservation of Lake Chad. A master and a MOOC have also been created to address the management of biosphere reserves and world heritage sites.

Finally, a biosphere reserve has been created, two others have been proposed as well as a cross-border World Heritage site, while two community radios have been launched to help prevent violent extremism and to promote peace , environmental protection and sustainable development.

Seven income-generating activities have been launched relating to beekeeping, fish farming, agroecological market gardening, rice growing and tree growing enabling 20,000 beneficiaries to diversify their sources of income and strengthen their socio-economic resilience to the impacts of Covid-19.

Three ecological restoration techniques have also been developed, allowing the rehabilitation of degraded lands and the improvement of community skills. Communication actions (website, newsletter and events) aim to publicize the project.

Several perspectives are emerging in a second phase of the BIOPALT project. Ecological restoration, for example, has already begun and aims to bring together the various users of the lake and promote peace and development. Income-generating activities have been developed and will make it possible to provide substantial income to actors in the field and to strengthen community management to conserve biodiversity and reduce poverty.

Seasonal movement of live stock across the national borders has been promoted, based on agreements for the peaceful management of natural resources and training (culture of peace, veterinary points). Mobile pastoral schools are being considered.

Finally, a synergy of action between education and literacy is being set up with other initiatives, such as the Project to Strengthen Education and Literacy (PREAT).

The BIOPALT project will thus have made it possible to obtain tangible results in the field of the restoration of degraded ecosystems (ponds, dune plains) and the promotion of income-generating activities based on the green economy.

Training and capacity building on the peaceful management of natural resources, building on UNESCO’s “PCCP approach”, has also been developed, as has the strengthening of cross-border cooperation, regional integration and the production of dossiers for the inscription of Lake Chad on the World Heritage List and the creation of biosphere reserves.

For 50 years, UNESCO’s Man and the Biosphere (MAB) Program has relied on the alliance between exact sciences, natural sciences and social sciences to find solutions implemented at the heart of 714 exceptional natural sites (in 129 countries) with biosphere reserve status.

Amadou Boureima, Head of the Laboratory for Studies and Research on Sahelo-Saharan Territories (LERTESS), Abdou Moumouni University of Niamey (UAM)

Aristide Comlan Tehou, Researcher at the Applied Ecology Laboratory of the Faculty of Agronomic Sciences, University of Abomey-Calavi of Benin