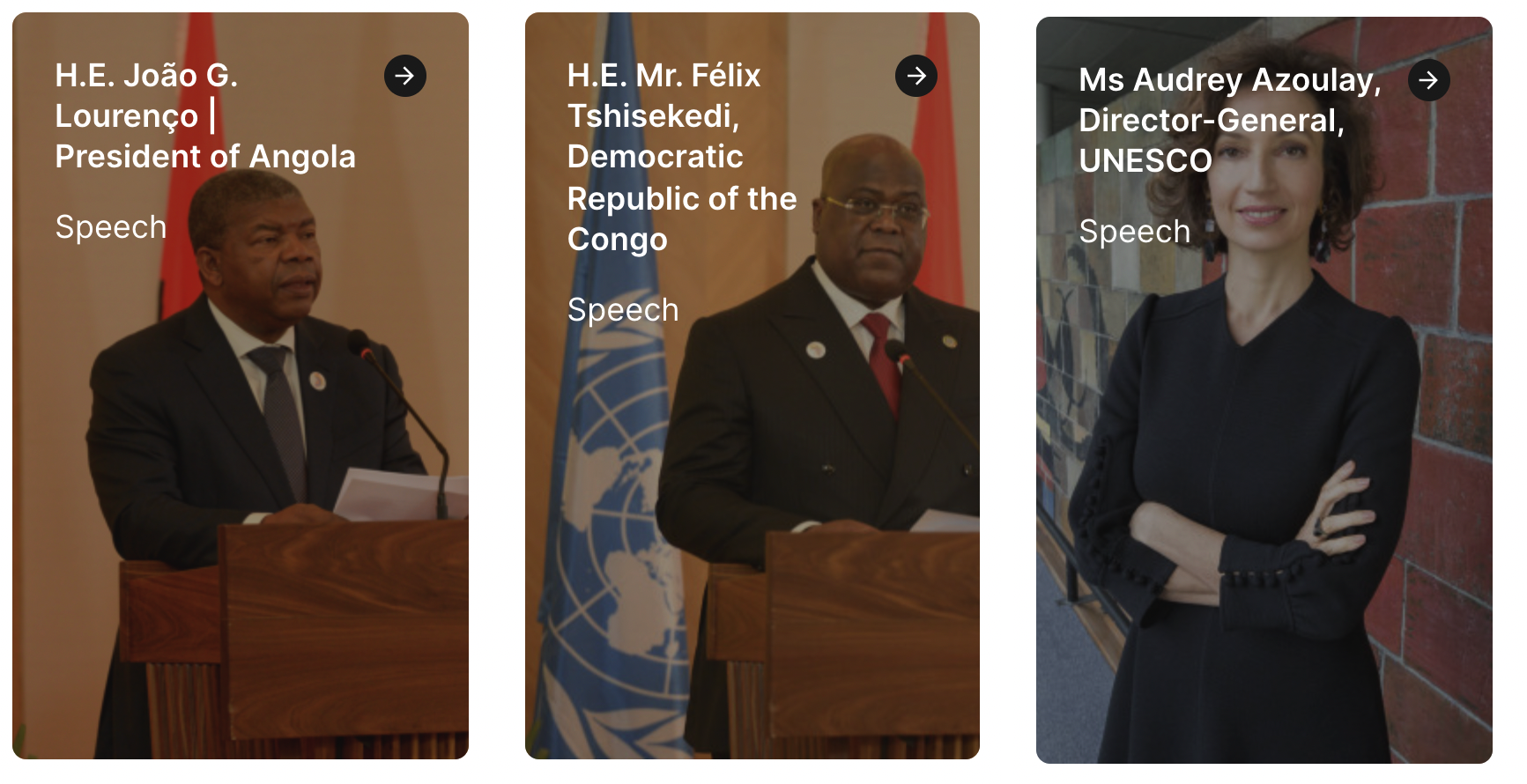 From the speech of the President of Angola João Lourenço, to open the Biennale (translated from the Portuguese by CPNN):

“It is with deep joy that I take the floor in the presence of distinguished Heads of State and High Representatives of the African Union and UNESCO, who grant us the honor of participating in the inauguration of the second edition of the Pan-African Forum for the Culture of Peace – Luanda Biennial 2021. Allow me to welcome you to Angola, in whose capital, Luanda, we will have in the coming days, the opportunity to reflect on topics that can help us to build the paths of Peace and Harmony between Peoples and Nations. . . .

“It is important to try to understand the real causes of the still prevailing climate of conflict in Africa, after a journey of just over six decades of construction of independence and sovereignty. Let us find formulas to will lead us out of the situation of uncertainty and instability that we face. We must recognize the immediate need for a general effort to stem the recurrent outbreak of conflicts of different nature, which contribute to instability and which impede our continent’s progress and development.

The Republic of Angola is an example of a country plagued by an armed conflict that has lasted for decades. However, we have managed to find the paths to lasting peace and project, in conditions of stability and the construction of a democratic society with forgiveness, reconciliation, tolerance, and solidarity with the peoples of our continent, who still face armed conflicts and their consequences. We have defined an internal line of conduct for the culture of peace and tolerance at all levels of Angolan society, so that we can avoid the specter of war. It is in this spirit, resulting from political achievements in favor of national unity, that we want to continue to consolidate peace and national reconciliation and advance towards economic and social progress.

“African youth must be at the center of all strategies aimed at peace. It must be the starting and ending point of all the pedagogy that is carried out in order to calm those spirits most prone to conflict and violence.

“Let us promote initiatives that involve families, schools, political organizations, religious institutions and society in general, in the effort to raise awareness among young Africans for the culture of peace, respect for the Law and the Constitution and respect for democratically elected institutions.

“This second edition of the Luanda Biennial brings us closer to achieving the a reference platform that brings together governments, civil society, artistic and scientific community, the private sector and international organizations, in the attaining and maintenance of peace, and in the prevention of conflicts and violence.

“The Biennale of Luanda is an alliance of partners, that include governments, United Nations agencies, the African Union, the European Union, the members of the organization of African, Caribbean and Pacific States, universities and non-governmental organizations, associated in a common effort to promote peace. Culture is the main support for the achievement of the goals that we have outlined, as it is helps to build bridges between peoples and nations, as a universal language of understanding. . . .

“It is important to know how to objectively identify the real causes of our difficulties, the paths to follow and partners genuinely interested in supporting development of Africa.

“It is my conviction that, with perseverance, we can achieve this level of satisfaction of our needs and move to a stage where the Africa we want, without precariousness and with greater predictability, provides us with a life at peace that favors dialogue over conflict, so that each individual naturally becomes an agent of peace.

“Many of Africa’s children have been leaving the continent in inhumane conditions and at the risk of their own lives in fleeing conflict zones or looking for a job and better living conditions.

“Regardless of their age, academic or professional background, they are all important and needed for the development of our continent.

“We always have the expectation that one day they will voluntarily return with the desire to contribute towards leveraging progress and development in all sectors of African national life.

“This step would mark the re-encounter with their lands, their people, in a fraternal embrace to the homeland where they were born, so that they could become protagonists of progress and development of their respective countries.

“Between us and the diaspora there is an immense ocean that separates us, but which can also serve as a vector of economic progress and social transformation of coastal communities and the country in general. The ocean offers us the potential of highly valuable resources for African economies . . .

“Members of the diaspora who have expertise in this area could help their respective countries – and in this way the continent in general-, to define and implement strategies for the preservation and sustainable use of marine resources and protection of the coast, often affected by climate change. . . .

“Angola has been learning to deal better with differences, in the context of a democracy in constant evolution. It is in this atmosphere that I want to wish you a good and productive stay in Luanda, so that this Biennale may be a success worthy of record, with a beneficial and lasting impact on our continent and all humanity.

“Thus, I declare open the second edition of the Pan-African Forum for the Culture of Peace – Bienniale of Luanda 2021.”

From the speech at the opening ceremony by African Union President Félix Tshisekedi, also President of the Democratic Republic of the Congo (translated from the French by CPNN):

” . . . The African Union, by my voice, salutes this great moment. Our continental organization has always placed culture and peace at the top of its priorities. Thus, the seven Fundamental Aspirations of its Agenda 2063, ‘The Africa that we want’, includes two that are largely devoted to this, in particular the promotion of ‘culture, arts and heritage as levers for the building of Africa that we want’ and ‘silencing the guns by 2020 extended ten years, until 2030.’

“The 24th Session of the Conference of Heads of State and Government invinstituting this biennial in 2015, instructed the African Union Commission to work for the organization of this pan-African forum for the culture of peace, in consultation with Unesco and the Government of the Republic of Angola. Their visions and their aspirations intersected and complemented each other.

“This is an opportunity for me to thank not only our Commission for the African Union but above all to salute the determination of the Government of Our Sister Republic of Angola. It is their dynamism, despite the serious difficulties generated by the Covid-19 pandemic, which made this event possible . . .

“I also extend my congratulations to UNESCO. From its inception in 1946 until this year marking its 75th anniversary, this great organization has never ceased, through its activities in education, science and culture, to support the first steps of our young States on the paths of development and peace. Allow me, Madam Director General Audrey Azoulay, here represented, to take this opportunity to offer you my warm congratulations your re-election, during the work of the 41st of the recently concluded session of the UNESCO General Conference.

“The noble objective of strengthening the Pan-African movement for a culture of peace is both existential and a priority, as we witness the macabre spectacle of the deadly effects of terrorism, inter-community violence and latent wars that are part of the daily life of our states. The most effective way to deal with this in a sustainable way is without doubt the approach adopted by our forum.

“The long history of our organization, since the birth of Pan-Africanism, has shown us that cultural fraternity is the foundation of the solidarity that our continent aspires to achieve, particularly economically and politically. Culture is not only our common foundation but it also continues to offer us the “palaver tree” around which is tied and untied all forms of dialogue and reciprocal listening, including the voices of those who are the most disadvantaged.

“I wish to emphasize how highly I appreciate that our Biennale can host a multiplicity of forums, in particular on intergenerational dialogue, on the engagement of women and young people as actors in the prevention of conflicts, on taking into account the potential of the oceans and the effects of climate change. Fortunately, even the contribution of the diaspora in social transformations has not been overlooked.

“Indeed, the fight for the Renaissance and African dignity cannot stop at the borders of our countries or even our continent. We must also promote interchangeability and open cultural osmosis throughout the world, especially between Africans here and elsewhere. This is promoted by the opening in the near future in Kinshasa of the Maison de la Culture African and Afro-descendant, as well as the launch of the Pan-African Festival of Kinshasa (FESPAKIN), and the Pan-Qfrican Literature Grand Prix.

“Excellencies, Ladies and Gentlemen, in the words of the illustrious Agostinho Neto Kilamba, President and Poet, champion of the liberation of man and human brotherhood, ‘poet of sacred hopes’, we should ‘look at Africa with the eyes of the future’,

“We are gathered here in Luanda, the land of Njinga, Ndongo and Matamba, the land of Kimpa Mvita, so that the light of the African Renaissance shines through in the values ​​of peace, fraternity and solidarity to nourish the Zone of African Continental Free Trade.

“The Democratic Republic of Congo and all of its people are at your side to continue this long fight for the future of our states, our continent and the entire world.

“It is with this determination that I wish every success to this second edition of the Luanda Biennale.”

From the speech of UNESCO Director-General Audrey Azoulay at the closing ceremony (translated from the French by CPNN):

“. . . The success of this second edition of the Luanda Biennale is due to the quality of the cooperation between UNESCO, the African Union and the Republic of Angola; which has grown steadily since the holding, in 2013, here in Luanda, the Pan-African Forum “Sources and Resources for a culture of peace.” I was then that the decision was taken to create a Biennial for the Culture of Peace.

“I would like, on this occasion, to reaffirm our commitment to continue this cooperation with the Commission of the African Union and to congratulate its President Mr. Moussa Faki Mahamat for his personal support to our joint initiatives in Africa. . . .

“The 41st session of the General Conference of UNESCO which has just ended has again designated Africa as one of the global priorities of our Organization with the adoption of a new operational strategy for the programme Priority Africa for the period 2022-2029. The Conference also adopted a decision engating all Member States, UNESCO and its partners to support the organizations of the next editions of the Luanda Biennale.

“This commitment intends to make the concept of a culture of peace a real tool available to citizens and peoples. It echoes the preamble to the Constitution of UNESCO which states that “a peace based exclusively upon the political and economic arrangements of governments would not be a peace which could secure the unanimous, lasting and sincere support of the peoples of the world.”

“UNESCO will continue to give its full support to this pan-African initiative, so that it is sustainable, in cooperation with the African Union and the Government of Angola.

“The culture of peace and non-violence is a long relay race ; it takes s a united team, generation after generation, to be victorious.”