An article from Guinée Matin

The Association for the promotion of local initiatives “APIL” launched last Saturday, September 25, 2021, the APAC Project of Didhèrè Foulah in Kolia, in the sub-prefecture of Kaala (a locality located 20 km from the urban commune of Dalaba). The ceremony took place in the presence of the new prefect, Colonel Mohamed Bangoura, as well as prefectural, sub-prefectural and municipal officials, according to Guineematin through one of its correspondents in the Mamou region. 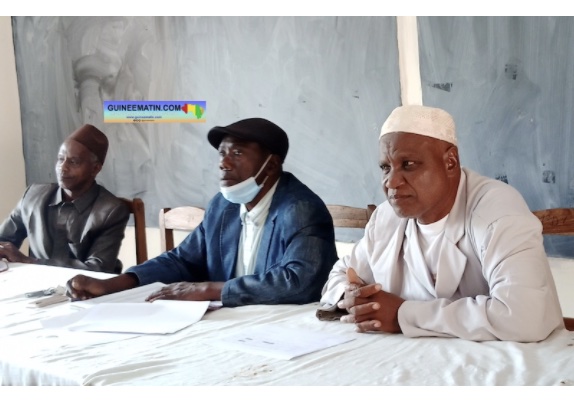 The APAC project of Didhèrè Foulah aims to protect a site at the confluence of several rivers and at the intersection of plains and highlands to enable it to maintain a viable ecosystem in the Dalaba area. Its overall objective is above all to support local initiatives for resilience in the face of COVID-19 by the communities of the APAC and to contribute to the conservation and maintenance of the ecosystem of Didhèrè Foulah.

“Our activities aim to build the capacities of environmental stakeholders, sensitize communities on the importance of ICCA, provide communities with materials and equipment for monitoring ICCA, train them in ” setting up a nursery, supply them with seeds and materials for agriculture, promote ecotourism by building a mausoleum and a shelter for tourists anf initiate other development activities of our localities so that the populations are independent and eradicate poverty,” explained Mrs. Mariama Diouldé Diallo, president of APIL.

At the launching ceremony of this project in Hérico district, Dr Hassimiou Bah, the secretary general of APIL, briefly reviewed the history of Didhèrè Foulah, once considered a place of demons.

Didhèrè Foulah, a veritable protected area of ​​historical heritage, is closely integrated into the lifestyles, land management strategies and identities of the local community, in the sense that all inhabitants pay sustained attention to the conservation of the site.

In the past, this site was considered the place of the demons and spirits of the Tènè river. There was a forest there which was so thick that the sun’s rays hardly ever reached it. This is where the Djallonkés came to worship the spirits. In this place an event so unexpected happened that the place was baptized Didhèrè Foulah. The pagans seized Abdoulaye Foulah and decided to immolate him in honor of the spirits of the site. They wanted to cut his throat, but the knife couldn’t hurt him. God saved Foulah. Because his boubou, which was too long, caused his head to emerge from the water and he lived there for a while (for 3 months or 12 days, according to legend). While Foulah was alive, the fish gnawed on his right little toe. Thus, until today, his descendants are born without a nail on this little toe. It was a woman from the NDanyebhé family who saved him from the waters and he survived and resumed his struggle to establish Islam, ”explained Dr Hassimiou Bah.

“The event that brings us together here is the launch of the APAC project which should contribute to the conservation and maintenance of the ecosystem of Didhèrè Foulah. Our population warmly welcomes the presence of this project in our rural community. We will fight to make this project a reality for the benefit of our citizens and future generations, ”said Mamadou Saliou Barry.

Present at this ceremony, Colonel Mohamed Bangoura, new prefect of Dalaba, welcomed this project and invited the populations to the culture of peace.

“I am very happy, a few days after my appointment as Prefect, to launch a major project linked to resilience to COVID-19, with many actions in view, including: the preservation of the biodiversity in the protected site, poultry farming, beekeeping, the creation of nurseries, market gardening, ecotourism… I congratulate the initiators of this project and the international cooperation for its funding. Brave people of Kaala, I ask you to take advantage of this project by making your contribution and to do everything to make it sustainable. This is why I urge you to join forces and your initiatives to make this project a success in your locality. Development must be our ambition. To succeed, we must create a climate of peace, unity and social cohesion between the various development actors, ”said Mohamed Bangoura.

It should be noted that the association for the promotion of local initiatives is an apolitical non-profit association, born from the desire of a group of people concerned with making their contribution in the process of combating poverty, especially in rural areas. .