An article and video by Le Mouvement

This Wednesday, October 13, in the council chamber of the Town Hall of Montpellier, the first national forum of the AFCDRP (Association of Mayors for Peace, France) took place, in the presence of its President Philippe Rio. 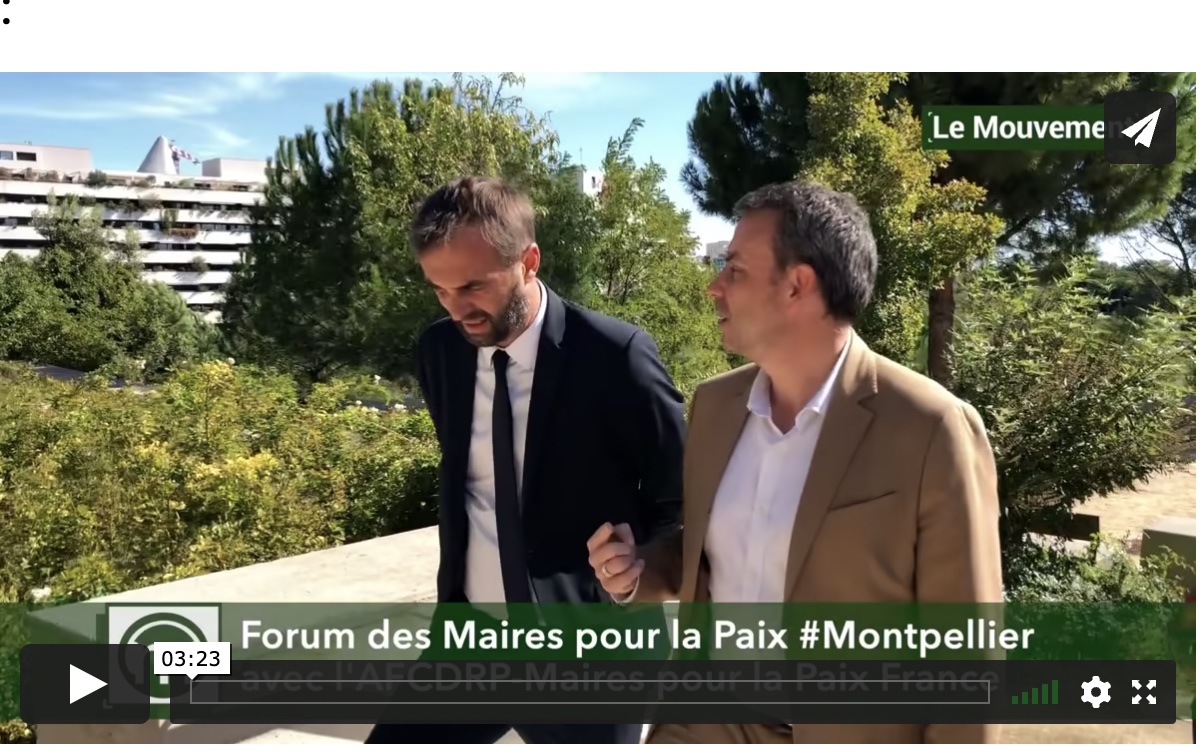 [VIDEO] Philippe Rio, Mayor of Grigny, Vice-President of the Greater Paris Sud agglomeration and President of AFCDRP-Mayors for Peace France

Working in a factory at age 16, before getting an education at Sciences Po, Philippe Rio became mayor of Grigny in the first round in 2014, as again in 2020. Last September, he was chosen as best mayor in the world by the London association “ City Mayors Foundation ”to reward his management of the Covid crisis, and his fight against poverty in his city. His mantra is the same as that of Nelson Mandela: “Education is the most powerful weapon to change the world.” But he adds an important clarification:” education for a culture of peace. ”

AFCDRP? The AFCDRP-Maires pour la Paix France is the French Association of Municipalities, Departments and Regions for Peace. It represents the French branch of the international network “Mayors for Peace,” including: Mayors for Peace. A movement founded by the mayors of Hiroshima and Nagasaki. In 1991, the organization was registered as an NGO with special consultative status with the United Nations Economic and Social Council.

Question to Philippe Rio: How can cities weave a true culture of peace? You were elected best mayor in the world thanks to your management of the Covid crisis, and your fight against poverty.

Philippe Rio: The “Mayors for Peace” aim to contribute to the establishment of world peace, by arousing the interest of the citizens of the world for the total abolition of nuclear weapons, through close solidarity between its member cities. And also: by aiming to solve vital problems, such as famine and poverty, the plight of refugees, human rights violations and environmental degradation. Worldwide, 8,047 cities are members of “Mayors for Peace. ”

“The fate of the City”

We must “look further” to organize “the fate of the City. “Joseph Mayoral, mayor of Granollers in Spain explains it thus:” we have to install a new type of governance based on proximity […] the only possible way is a dialogue with our citizens. “One of the processes for successfully disseminating the SDGs (Sustainable Development Goals) for safe and resilient territories: the 17 goals to be achieved by 2030 to save the world.

Montpellier is now a member of “Mayors for Peace”, the tree that survived the atomic bomb in Hiroshima, a Ginkgo biloba was planted to symbolize this belonging. Michaël Delafosse marked the city’s attachment to “this very important network,” with “the awareness that the metropolis of Montpellier is a small piece of land which must try to work in its own way for the problems of the great Earth. We are facing the challenge of climate change, and when big cities enter into transition decisively, they can mitigate the great peril that we encounter in the 21st century. We must work collectively, so that actions go beyond words and speeches.