An article from Cameroun Actuel

Women’s rights organizations, including the pioneer WILPF Cameroon, gathered within the Consultation Platform “Cameroon Women for National Dialogue”, organized a workshop on September 28, 2021 in Douala. to monitor and evaluate their actions . 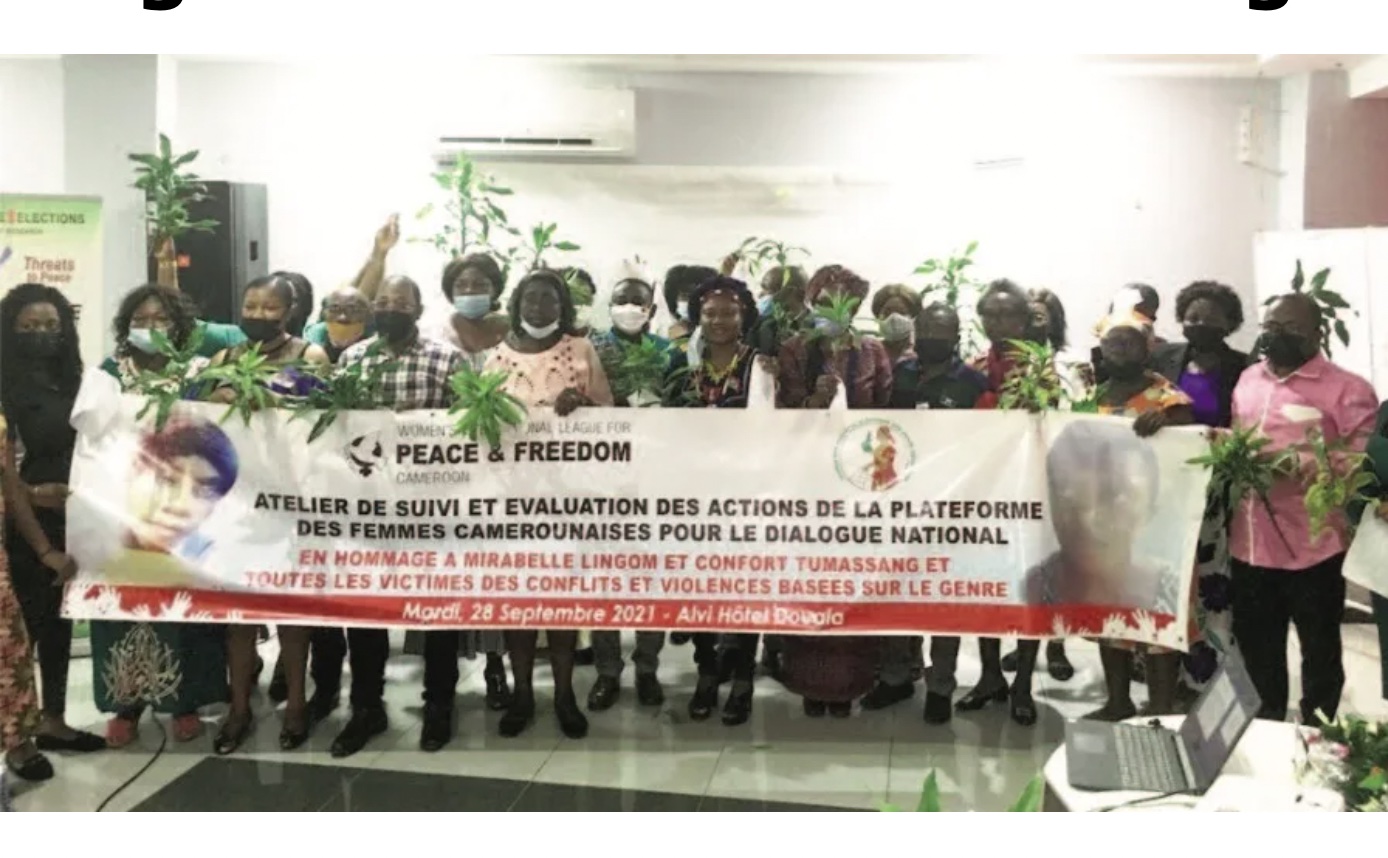 Created on September 10, 2019, after the announcement of the national dialogue by the President of the Republic, Paul Biya, the Women’s Consultation Platform for the National Dialogue was set up and organized with other partners, consultations of women’s associations and groups in the country and in the diaspora to discuss the process to be taken collectively to make the voice of women heard during the national dialogue. This pre-dialogue consultation was in line with the National Action Plan implemented in line with Resolution 1325 of the United Nations Security Council (UNSC).

Following the GDN, the platform embarked on a new advocacy for the holding of a new national dialogue that is more inclusive of the main stakeholders and that takes more account of the voice of women.

To this end, the convention organized by this platform appeared to be an extraordinary opportunity, a real catalyst that could have favored the government’s capitalization of initiatives such as the “Cry of Cameroon women”.

From then on, WILPF Cameroon carried out a gender analysis of conflicts, which helped them to put in place a process towards peace with the support of its members. So far, the results of the analysis have shown that women support each other in the context of conflict in Cameroon. Notwithstanding a few obstacles, the platform got involved in activities despite the difficult context marked by an increase in killings in Cameroon and fewer opportunities for solutions.

Out of the crisis through dialogue

The members of this platform continue to lose their brothers and sisters because of gender-based violence and war. For Sylvie Jacqueline Ndongmo, president of WILPF Cameroon and coordinator of the platform, “the workshop to evaluate the actions of this platform aims to proceed with a better structuring, coordination and also to question our associative commitment. That’s why we thought about enlisting the support of a consultant to discuss the ins and outs of our problems as members of civil society organizations and platforms.”

Regarding issues that affect women, the platform believes that the government must, among other things: put in place measures to address the issue of impunity for perpetrators of gender-based violence in a sustainable manner; concretize the institutionalization of peace education in order to promote a culture of peace in and outside school; institutionalize a simplified procedure for accessing legal birth certificates and national identity cards destroyed as a result of the crisis; improve women’s access to property; make arrangements for the establishment of a structure specializing in trauma in order to deal with the problems of sexual and gender-based violence in humanitarian contexts, etc …

Thanks to the support of development partners and the government, women’s movements have been structured to create more and more spaces for women. But with the rise of violence and crises in recent years in Cameroon, women have regularly risen to ask for peace.

In this case, on September 28, members of the platform “Cameroon Women for National Dialogue” recalled that this workshop was also organized for survivors and victims. In particular, thoughts are with Mirabelle Lingom and Confort Tamasang, who have paid the price for gender-based violence respectively.

“These lives are being lost for nothing, as voices are raised to call for inclusive dialogue to end conflict and combat gender-based violence.” concluded Sylvie Jacqueline Ndongmo, coordinator of the platform.