Received at CPNN from Georgina Galanis

The President of the General Assembly (PGA) convened on 7 September 2021 the High-Level Forum on The Culture of Peace, as mandated by the GA resolution 75/25 of 2020. The High-Level Forum, participated by the Member States and Observers to the United Nations as well as other stakeholders, renewed the call for full and effective implementation of the UN Declaration and Programme of Action on a Culture of Peace. 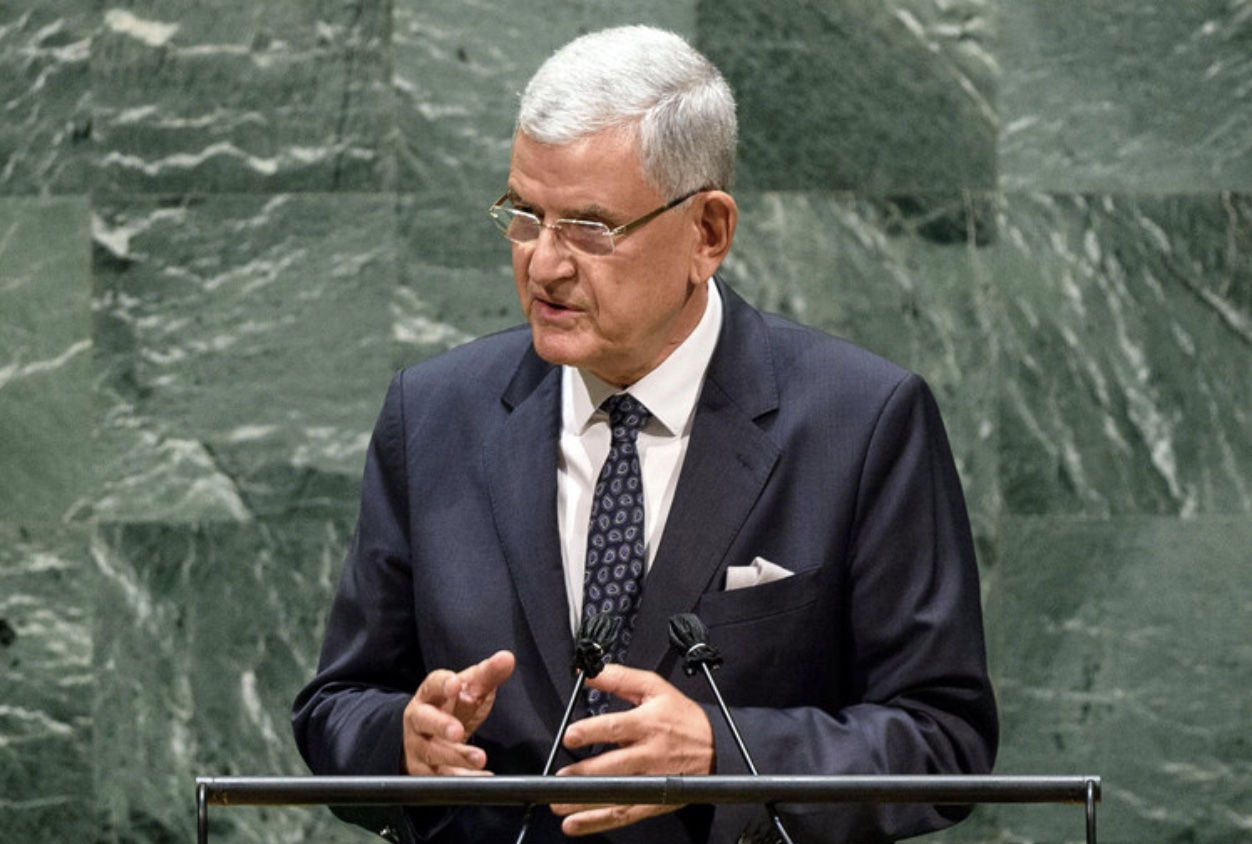 UN Photo/Loey Felipe
Volkan Bozkir, President of the 75th session of the United Nations General Assembly, opened the High-level Forum on the Culture of Peace

The theme of High-Level Forum – “Transformative Role of The Culture of Peace: Promoting Resilience and Inclusion in Post-Covid Recovery” reflected the relevance of the abiding values of the culture of peace in combating the Covid-19 pandemic and its socio-economic impacts, and underscored the importance of empowering all segments of the society towards a resilient recovery, including by ensuring vaccine equity, bridging digital divide, promoting equality and empowerment of women and harnessing the power of youth, among others.

In his opening remarks, the President of the General Assembly, H.E. Mr. Volkan Bozkir, pointed out how humanity was brought together by the pandemic and stressed the need to “build on this shared sense of grief and anxiety, and work together to not only tackle COVID-19 but all other challenges that stand in our path.” Referring to the sufferings of the Rohingya and Afghanistan people, the President emphasized on elements such as conflict early warning, fact-finding missions, early deployment of peacekeepers when needed, and of course humanitarian assistance, to maintain and support a culture of peace. “Peace is much, much more than the absence of conflict. Peace is a conscious effort by each of us, each moment, to talk, to listen, and to engage. It is a sustained effort to understand and overcome differences”, he added.

The Foreign Minister of Bangladesh H.E. DR A.K. Abdul Momen participated in the Opening Session with a pre-recorded statement. In his remarks, the Foreign Minister recalled Bangladesh’s pioneering role in the adoption of the UN General Assembly Resolution on The Culture of Peace since 1999 and organization of the High-Level Forum since 2012. Recognizing the need for creating an environment for peace for a resilient recovery from Covid-19, the Foreign Minister invited the international community to mainstream culture of peace in all pandemic recovery efforts. He underscored the strong correlation between peace and development and in this regard, called for ensuring timely implementation of the Agenda 2030.

Speaking on behalf of the UN Secretary-General, the Chef de Cabinet Ambassador Maria Luiza Ribeiro Viotti, highlighted the foundational role of culture of peace for “building a better, fairer, more sustainable future for all—the future in which human rights are realized for every person.” She called attention not only to the devastating consequences of climate change and the threatening effects of the pandemic on health and economics but also to the rising conflicts, gender-based violence, inequality and hate speech. The Chef de Cabinet stressed that working to achieve peace not only covers traditional notions of security, but also challenges such as social injustice, the normalization of hate speech, terrorism, violence against women, and conflict.

The High Representative of the United Nations Alliance of Civilization (UNAOC), H.E. Mr. Miguel Ángel Moratinos in his remarks stated that the culture of peace is becoming relevant every day in the context of multidimensional impacts of Covid-19 and urged all stakeholders to re-commit to taking result-oriented actions towards uprooting all forms of discrimination and eliminating inequalities through dialogue, tolerance, diversity and respect among state and non-state actors. Speaking on behalf of Director General of the United Nations Educational, Scientific and Cultural Organisation (UNESCO), Mr. Eliot Minchenberg, Director a.i., Office of UNESCO in New York, underlined that the very notion of the Culture of Peace was born in UNESCO in 1992 and reaffirmed that the Organisation, together with its partners, stands ready to build peace and overcome the challenges of today. He also pointed out that due to Covid-19 pandemic, education has been gravely affected, particularly among girls and young women.

During the plenary meeting, Member States stressed that the pandemic has highlighted the vulnerabilities and inequalities, increasing intolerance and tensions within communities, and between states. They underlined the importance of fostering a culture of peace through education by revising the educational curricula to promote qualitative values, attitudes, and behaviours of a culture of peace, including peaceful conflict-resolution, dialogue, consensus-building and active non-violence. The High-Level Forum also discussed how the culture of peace is fostered by the promotion of sustainable economic and social development and heard arguments towards the need to reduce inequalities and eradicate poverty if we are to alleviate grievances. The Member States also highlighted the importance of protection and promotion
human rights and ensuring gender equality in achieving the objectives of the declaration and the programme of action on culture of peace.

Following the plenary segment in the General Assembly Hall in the morning, a panel discussion was held virtually in the afternoon with the participation of invited panellists, discussants, and representatives of civil society organisations. The Founder of the Global Movement for the Culture of Peace (GMCoP), Former Under-Secretary-General and High Representative of the United Nations, Ambassador Anwarul K. Chowdhury moderated the panel discussion. A wide range of stakeholders – H.E. Ms Rabab Fatima, Permanent Representative of Bangladesh to the UN, H.E. Mr. Rodrigo A. Carazo, Permanent Representative of Costa Rica to the UN, H. E. Ms. Mathu Joyini, Permanent Representative of South Africa to the UN, Mr. Federico Mayor Zaragoza, President of Foundation for a Culture of Peace, former Director-General of UNESCO (1987-1999), Dr. Ada Juni Okika, Global Director of the Centre for Transformative Advancement of Development of Africa (CTADA), Mr. Liu Zhenmin, Under-Secretary-General for Economic and Social Affairs, UN, Mr. Francisco Rojas-Aravena, Rector of the University of Peace in Costa Rica participated in the panel discussion.

Chair and Moderator Ambassador Anwarul K. Chowdhury in his opening remarks paid warm tribute to PGA-75 H.E. Mr. Volkan Bozkir under whose leadership the High-Level Forum on The Culture of Peace convened. He drew attention to the reality that the Culture of Peace has yet to attain its worth and its due recognition at global as well as national levels. He called for renewed attention to the Declaration on Culture of Peace which, “after the UN Charter, is the only major document of the UNGA which focuses on peace in the most comprehensive manner.” He underscored the difference between peace and culture of peace and called for individual actions to advance culture of peace which aims at making peace and non-violence a part of our own self, our own personality – a part of our existence as a human being.

Ms. Beatrice Fihn, the 2017 Nobel Peace Prize Laureate and the Executive Director of the International Campaign to Abolish Nuclear Weapons (ICAN) presented the keynote speech. In her keynote speech, Ms Beatrice Fihn highlighted the enduring values of the culture of peace in addressing the both the contemporary and the longstanding challenges facing the humanity. She emphasized on renewed commitment and stronger action to eliminate nuclear weapons that continue to threaten the very existence of the human society.

As a panellist, Ambassador Fatima, Permanent Representative of Bangladesh to the United Nations in New York, underscored the long-standing commitment of Bangladesh to the culture of peace at the UN and its continuing, proactive role in advancing the implementation of the UN resolutions on the culture of peace. She stressed on eliminating digital divide and restructuring conventional education system in ensuring uninterrupted access to education by all children. Expressing her concern at the alarming rise in inequality within and among societies, she urged the global community to address inequality in a holistic manner. She also called for increased efforts including dialogue for elimination of hate speech, xenophobia and discrimination across the society for an inclusive recovery.

Civil society organizations actively participated in the High-Level Forum interactive session. They stressed that peace should be embraced as a way of life. The culture of peace should be nurtured through strengthening mutual respect and protecting the dignity of all members of the society regardless of their race, religion, belief or gender.

The High-Level Forum provided an opportunity for Member States, observers, UN entities, non-governmental organizations, academia, and other interested parties, to exchange ideas and make suggestions on how to utilise the values of culture of peace in post Covid recovery efforts, especially to ensure that the recovery from Covid-19 is durable, resilient and inclusive. In this context, the High-Level Forum provided a meaningful contribution to the pivotal discussions and commitments expected at the General Assembly during the High-Level Week later in September 2021.