The first step was taken in 1986 with the Seville Statement on Violence which showed that war is a cultural invention, not a biological process, and therefore a culture of peace can also be invented.

The second step forward was taken in 1999 with the Declaration and Programme of Action for a Culture of Peace, developed at UNESCO and adopted by the United Nations General Assembly, which provided a precise definition of the culture of peace. 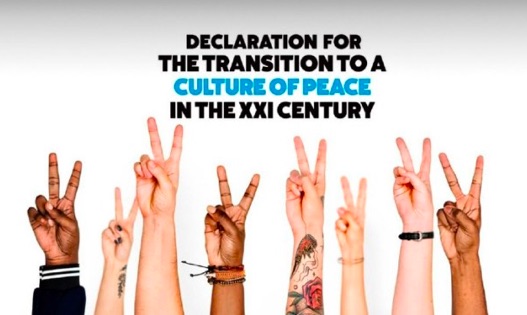 In 2011, the 25th anniversary of the Statement was celebrated at the XXXIII International Colloquia on Brain and Aggression held in Rome, Italy. Participants included Roberto Mercadillo as a researcher from the National Council of Science and Technology, Mexico, and David Adams, as the director of the Culture of Peace News Network. Adams had been a signatory of the Seville Statement along with Federico Mayor Zaragoza. Mayor later became the Director-General of UNESCO, where he was responsible for the UN Declaration, along with Adams who was working with him at that time.

At the meeting in 2011, Adams and Mercadillo concluded it was time to take the next step to propose a specific program for the transition from the culture of war to the culture of peace through educational innovation and the participation of local governments.

The program includes proposals for radical reforms of the United Nations, that were developed in 2016 by Federico Mayor Zaragoza and David Adams including the formation of an alternative to the UN Security Council involving mayors of major cities, directed by a small volunteer secretariat.

It was thus that, in 2019, Mayor-Zaragoza, Adams, and Mercadillo undertook the task of elaborating a new Declaration following a cognitive approach of consciousness in four steps:

First, to recognize the current status;

Second, to remember what we have done so far;

Third, to understand what we have done and must do based on our present situation;

Fourth, to propose and define actions to move towards a Culture of Peace in the 21st century.

For the first step, called “we recognize”, the Declaration displays actions on the culture of peace carried out around the world during the last 20 years, as well as the violent actions and war that continue to prevail.

For the third step, called “we understand”, the Declaration analyses the revised previous declarations and manifestos in light of the problems, needs, and possibilities of the 21st and recovered the mention “we the peoples” that opens the Charter of the United Nations signed in 1945 to initiate future actions and consciences.

For the fourth step, called “we propose”, the Declaration describes strategies in two simultaneous routes: local and global. The local route is fundamentally pedagogical and is carried out mainly by organized civil society supported by local governments. The global route involves the expansion of the UN General Assembly and creation of councils for economic, environmental, and social affairs, along with the formation of an international security council of mayors, mentioned above, that would issue regular press releases demonstrating that the culture of peace could be achieved if the United Nations were governed by “we the peoples.”

The Declaration is available in two versions, the full version as described here, and a brief version consisting of the fourth step, “we propose.”