An article from The African Union

The African Union (AU) advocates for the meaningful participation and leadership of women and their efforts towards silencing the guns, enhancing good governance, democracy, respect for human rights, justice, the rule of law towards a peaceful and secure Africa as outlined in Agenda 2063. In recognition of African women who have exceptionally advanced the women, peace and security agenda in Africa, the African Union and the United Nations will publish a commemorative book to celebrate the contribution of women in achieving Aspiration 4 of Agenda 2063 and as part of the activities for the 20th anniversary of the United Nations Security Council Resolution 1325 on women, peace and security 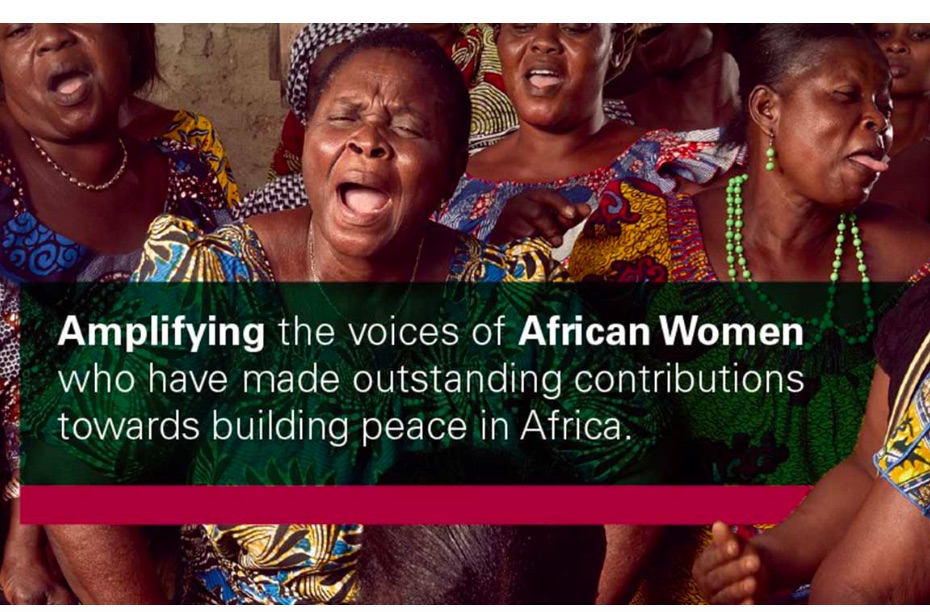 In July 2019, The African Union Commission (AUC) and the United Nations Office to the African Union (UNOAU) launched the call for nominations of African women who have exceptionally advanced the women, peace and security agenda in Africa. The selected women will be featured in an upcoming commemorative book set to be launched in the year 2020. View the Nominations Page Here

Twenty (20) African women will be featured in the book. A chapter will be dedicated to each woman to share her story or contribution to either of the four pillars of Resolution 1325 namely; prevention, protection, participation and/or relief and recovery as part of the peace and security activities.

The book aims to send a message of encouragement to women across our continent and in the rest of the world, by reflecting the exceptional stories and contributions of women to peace and security on the continent and serve as a learning experience and motivation to other women, especially young women involved in mediation, peacebuilding and peacekeeping activities.

The commemorative book will be launched at the margins of the 33rd Ordinary Session of the Assembly of State and Government of the African Union (AU Summit), scheduled for February 2020 at the African Union headquarters in Addis Ababa, Ethiopia. This will also align with the launch of the African Union theme of the year 2020 on Silencing the Guns: Creating Conducive conditions for Africa’s Development.

The AU’s commitment to promoting women’s participation in the peace and security agenda and in Africa’s overall development is demonstrated in its policy formulation and allocation of resources – human, institutional and financial- towards attaining gender equality and women’s empowerment, as a critical goal and strategy in the realisation of Aspiration 6 of Agenda 2063 that recognises the centrality of women in Africa’s development. These efforts also act as a catalyst the achievement of the goals of UN  Security Council Resolution 1325 to further drive the women agenda in the peace and security architecture.

In 2014, Mme. Bineta Diop  was appointed as the AU Special Envoy on Women, Peace and Security mandated to promote and elevate the voices of women in conflict prevention, management and resolution, as well as advocate for the protection of their rights, including putting an end to sexual and gender-based violence. Her efforts are also complemented by other mechanisms such as the Network of African Women in Conflict Prevention and Mediation – commonly known as FemWise-Africa. FemWise-Africa has vigorously mobilised women and girls from all over the continent and the Diaspora as it aims to promote and professionalise the role of African women in mediation processes, conflict prevention and peace-making efforts.

Read- Continental Results Framework (CRF) for Monitoring and Reporting on the Implementation of the WPS Agenda in Africa.