A press release from the Nala Feminist Collective (Nalafem)

Twenty six years after the unanimous adoption of the Beijing Declaration and Platform for Action  as a global agenda for women’s empowerment and gender equality by world leaders including Hilary Rodham Clinton, H.E. Joyce Banda, H.E. Ruth Cardosa and H.E Nana Konadu Agyeman Rawlings, the Nala Feminist Collective (Nalafem); a  Pan African group of 17 young feminists with a mission to foster and mobilize young women from Africa and the diaspora, advocate for Africa Young Women B+25 Manifesto; a groundbreaking political document that sets out ten critical issues of concern for young African women. The manifesto calls on world leaders to scale up action for progressive gender inclusion and will be presented at the upcoming Generation Equality Forum in Paris. 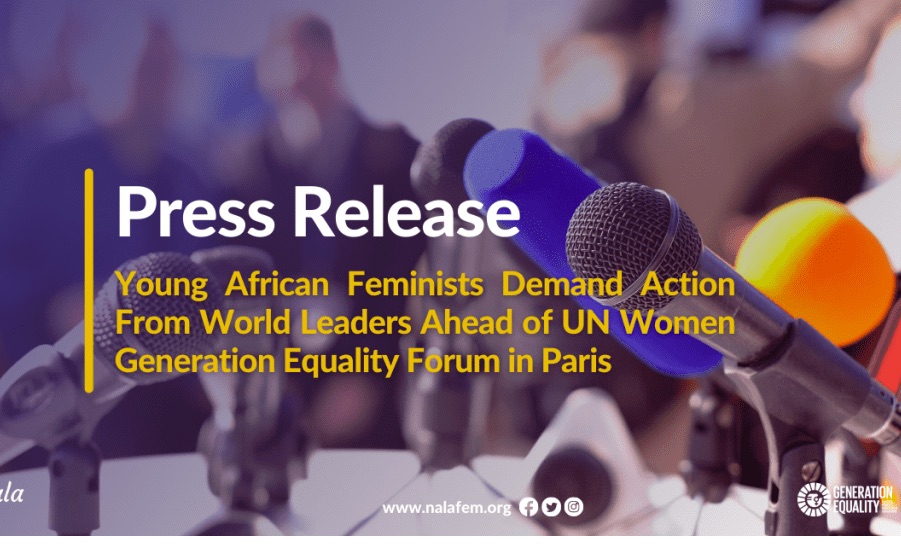 Ahead of the Generation Equality Forum, the Nala Feminist Collective, chaired by Aya Chebbi, will be officially launched at a virtual press conference on Wednesday, June 23rd, 2021 at 2:00PM GMT. The press conference will introduce the 17 young women from across Africa who make up the Nala Council, as well as the outcome of the mobilization achieved for the Africa Young Women B+25 Manifesto, to the public.

Nala Feminist Collective will also be hosting a high-level side event during the GEF Paris Forum  on July 1st, 2021 at 9:20 AM GMT called the “Africa Young Women United for the Decade of Action”. Speakers at this event include  H.E. Filsan Abdulahi; Minister of Women, Children and Youth of the Federal Republic of Ethiopia, Hon. Emma Theophelus; Deputy Minister of Communication, Information and Technology of the Republic of Namibia and Vanessa Nakate; Climate Justice Advocate from Uganda.

According to Aya Chebbi, Chair of the Nala Council, “The manifesto demands progress, not promises, for gender equality. Enough is enough, we are not waiting 108 more years to receive what should already be ours. We will seize the momentum to leave our mark at the Paris Forum in two weeks’ time because generation equality cannot afford to move forward without Africa.”

Aya Chebbi is the chair of the Nala Council who served as the first ever African Union (AU) Special Envoy on Youth and is the youngest diplomat at the Africa Union Commission Chairperson’s Cabinet. In an attempt to bring Young African Women and African Women’s issues closer to the global forum, Aya, in her capacity as AU Special Envoy on Youth, convened over 1,500 young people from across 44 African countries in five regional Barazas  and a Global Intergenerational Dialogue which culminated in the Africa Young Women Beijing+25 Manifesto.

The Manifesto has received groundswell and political support with over 10,000 signatures from young people across Africa and beyond, as well as leaders such as H.E. Mme Phumzile Mlambo-Ngcuka, UN Women Executive Director who stated that “the Africa Young Women Beijing+25 Manifesto is the part of the actions that we are going to take in Generation Equality as we need African youth energy and dynamism”, H.E. Mme Bineta Diop; the AU Special Envoy on Women, Peace and Security, and Amb. Delphine O; Ambassador-at-large and Secretary General for the Generation Equality Forum (Beijing+25), who said “I am impressed by the number of the young women who have participated from 44 Countries, and by the demands. I am glad to see that the demands overlap and contribute to the Action coalitions of Gender Based Violence, the Economic Justice and Rights, and Sexual and Reproductive Health and Rights”.

This is an opportunity for young women to articulate their concerns and secure a clear and unreserved commitment by the Generation Equality Forum and Action Coalitions Leadership. The Generation Equality Forum is convened by UN Women and will be held in Paris from June 30 to July 2, 2021  to drive urgent action and accountability for gender equality.

Show support for the progress of young Africa women towards equality by signing the Africa Young Women Beijing+25 Manifesto here,

And learn more about the Nala Council Members here.

Nala Feminist Collective aka Nala is a Pan-African group of 17 feminists with a mission to foster, enable and mobilize young women from Africa and Diaspora, while bridging the gap between policy and implementation, intergovernmental and grassroots, as well as generational spaces. Nala is guided by the Africa Young Women Beijing+25 Manifesto targeting the political, digital and offline spaces, and works in the areas of Advocacy, Research and Fellowships. Learn more about NalaFem by visiting www.nalafem.org