A statement reprinted by Juan Cole, along with many other journals, including Al Jazeera

We write to express our solidarity with the scholars, activists, and other knowledge producers who are targeted by the February 2021 statements by Frédérique Vidal, France’s Minister of Higher Education, Research, and Innovation. In them she denounced “Islamo-gauchisme” (Islamo-leftism) and its “gangrene” effect on France, and called for an inquiry into France’s national research organization, the CNRS, and the university. The specific kinds of knowledge in question analyze and critique colonialism and racism, and support decolonial, anti-racist, and anti-Islamophobia projects within the academy and on the streets. Vidal’s statements show the discomfort these challenges are causing the State, and hence the desire to repress them rather than engage them. 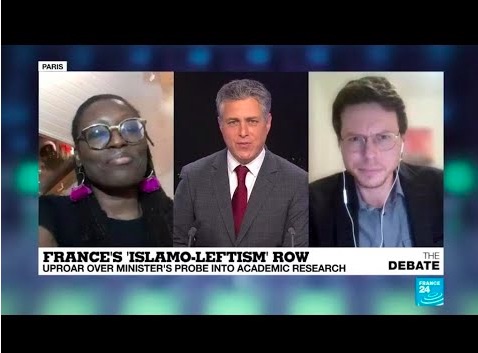 Video of the debate

The State’s intentions are found in the language it uses. The relatively new term “Islamo-gauchisme” reflects a much older convergence of right-wing, colonial and racist ideologies working in opposition to anti-colonial, anti-Islamophobia and anti-racism struggles.

Vidal claims that anti-colonial, decolonial and postcolonial critique, anti-racist, anti-Islamophobia, intersectionality, and decolonial feminist and queer analyses are foreign imports from the US academy.

This false narrative and these acts of repression effectively remove France from a vibrant and urgent global discussion. They put faculty of color and allies producing critical scholarship on colonialism, Islamophobia, anti-Black racism, etc. – already few and marginalized – at even greater risk.

The attack on progressive and radical scholars and activists seeks at all costs to preserve “French exceptionalism” and a whitewashed image of the Republic scrubbed clean of inconvenient truths. These include the fact that France remains a colonial power (in, for example, Réunion, Guadeloupe, Martinique, French Guiana, Iles des Saintes, la Désirade, Mayotte, New Caledonia, etc), and a neocolonial one in terms of its economic, political, and military relations to former colonies.

This colonial mentality is manifest in France’s structures of governance, especially with regard to both citizens and immigrants of color, as reflected in a barrage of laws such as: the law against wearing the veil; immigration laws; the Islamophobic law against “separatism” which has already shut down the CCIF (Collective against Islamophobia in France) and threatens all forms of autonomy; the proposed “global security” bill institutionalizing mass surveillance, including by drone, and restricting publicization of police brutality; the (now-repealed) law that mandated that colonialism be taught in only one State-sanctioned manner; rights-abusive and discriminatory counterterrorism laws; and others. These measures seek to forcibly “integrate” suspect populations into subordinate roles in French society.

It is precisely the critique of this colonial history and present, and its manifestations in State racisms including Islamophobia, that the State wishes to censor and make invisible.

Elements of the White Left, including feminists without an anticolonial, anti-Islamophobia or antiracism analysis, have also been complicit in rendering colonial and racial oppression invisible, and providing ideological rationalizations for State racisms. This, too, speaks to the incoherence of the term, “Islamo-leftism.”

The repression in France is not isolated. In Brazil, Turkey, Hungary, Poland, the US, India and other places we see the rise of neoliberal, right-wing, and authoritarian governmental suppression of critical scholarship and social movements.

But wherever we find repression we also find forms of resistance networked into global chains of solidarity.

Vidal’s statement and the planned inquiry have appeared in the context of an explosion of energy in both the academy and on the streets to address colonial, racial, and economic injustice. For example, the demonstrations in defense of Adama Traoré in France and other anti-racist protests globally after the murder of George Floyd represent the kind of commitment and courage that Vidal and others are worried about. Repressive laws and inquiries will not stop this scholarship nor the movements.

As international scholars and activists, we pledge solidarity with our counterparts in France. We commit ourselves to monitoring the situation carefully, to publicizing cases globally, to inviting those facing repression and censorship to speak in our countries, to co-authoring essays with them and helping them get their work translated, to co-mentoring students and junior colleagues, and to engaging in other forms of collaboration that they desire.

As of April 14, there were 556 signatures along with their institutional affiliations. The full list of signatures is available here.