An article by Sabine Bock from Pressenza

The artist duo Captain Borderline has created on the theme of “Collateral Crucifixion” a huge, artistic mural on a complete house facade directly in front of the SPD headquarters, the Willy Brandt House, in Stresemannstr. 15 in Berlin Kreuzberg. In conversation with the two artists, they explained to us the reason for creating the revolutionary, crucifix-like work of art. 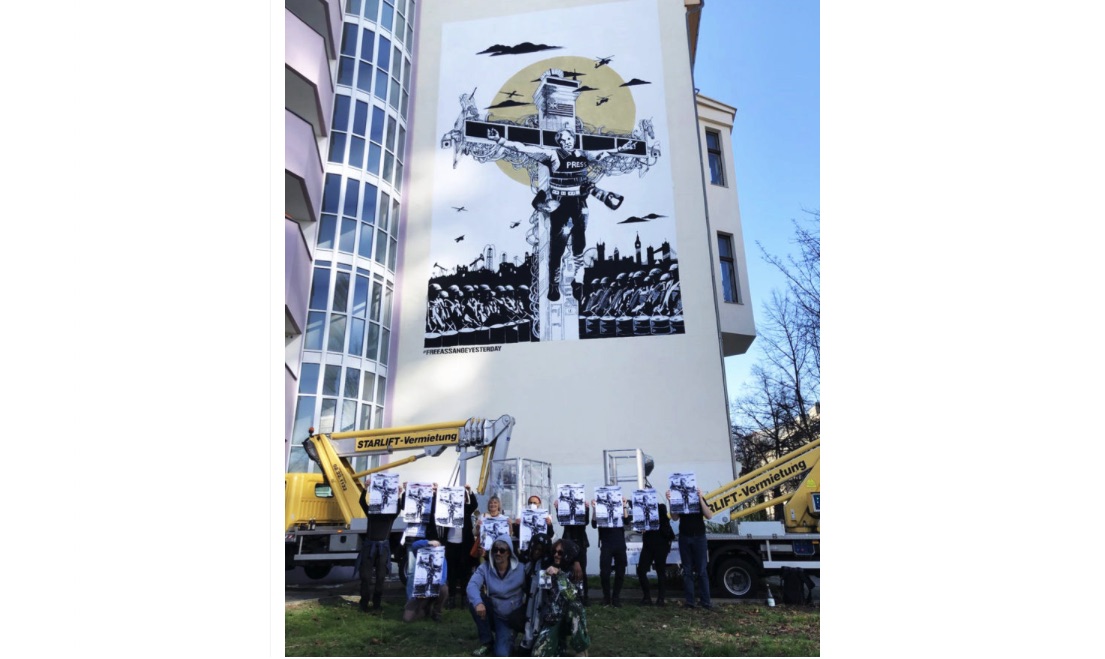 For almost 10 years, Julian Assange has been in captivity for exposing horrific, inhumane war crimes in an oil war that violated international law and for making his knowledge available to a broad public. The UN Special Investigator on Torture, Nils Melzer, has been the only neutral body to conduct serious research regarding these incidents.

He concludes that Julian Assange has become the victim of a huge show trial whose sole purpose is to show the media worldwide the limits of investigative journalism. The real issue in this legal case against Assange, then, is freedom of the press. Journalists and whistleblowers are being made to believe, through this witch hunt, that they will suffer the same fate should they report on the illegal machinations of the American or Western establishment and governments. How else can it be that powerful men like George W. Bush and Donald Rumsfeld can invade a country like Iraq for no reason, bomb it, and be responsible for the deaths of almost a million people with impunity, while a man like Assange, who merely publicizes these illegal machinations of the warmongers as a journalist and publisher, ends up in a maximum security prison for it. The responsible politicians, Bush and consorts, on the other hand, can enjoy their stolen wealth in their castles unmolested. That is why we demand the immediate release of Julian Assange from the British prison and to respect the freedom of the press. 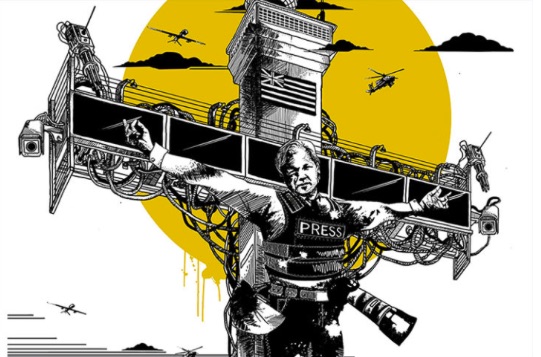 To help bring to light the truth behind the construct of lies of which Julian Assange has been a victim for many years, the artist duo Captain Borderline created and completed this revolutionary crucifix-like artwork with Julian Assange as the crucified of the media world on the complete house wall directly in front of the Willy Brandt House in Berlin Kreuzberg during the Holy Week before Easter.

With the purchase of an art screenprint you support the non-profit art and culture association “Colorrevolution” e.V. in financing a huge (20m*10m), media-created mural of “Captain Borderline” with this motif directly in front of the Willy-Brandt-Haus in Berlin. https://assange.colorrevolution.de/

[Editor’s note: The artists of Captain Borderline are A. Signl, B. Shanti and Dabtar, as shown here: augsburger-skandal-zeitung.blogspot.com/2013/08/wer-hat-sich-das-alles-ausgedacht.html