Sarah is a young peace activist from Rennes. To conclude the evening programmed in video a few days ago by the Mouvement de la Paix , she described the citizen actions carried out by her generation as less collective than those of their elders. “We try to seek peace from day to day through dialogue, exchanges, travel. Our outlook is different because for most of us we have not known a war first hand.” Impressed by the words of the various women who testified from one end of the planet to the other, she deplored the lack of commitment of young people “caught up in everyday life” in a society “where everything goes fast”. 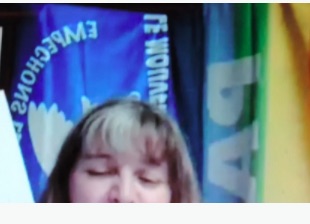 These women were not lacking in enthusiasm when recounting their commitments for peace. However, “women’s work for peace is neither visible nor valued,” regretted Croatian journalist Shura Dumanic, relating the loneliness of activists in her country who do not receive any support from the state and can only count on NGOs or European religious associations.

“If we don’t start with the children, we will never guarantee the existence of peace or equality”

From Nabila the Palestinian to Birgitta the German via Mina in Algeria or Fatema in Morocco, all their voices praised the strength of women in this difficult fight for peace.
“When civil society acts effectively to promote the goals of peace” – recalled Birgitta Meier from Erlangen – “women are always in the forefront”. And it is for this reason that Mouvement de la Paix had chosen this year again to highlight them on the occasion of the month of March devoted in Rennes to women’s rights.

For many of them, building peace requires education. In Gaza, Nabila Kilani, English teacher and founder of an educational and cultural center, says: “If we don’t start with children, we will never guarantee the existence of peace or equality.” And she seems to have started well. She initiated her project in 2009 with two children and now welcomes 120! “We are reopening the minds of children to give them hope for a better future for themselves and for all of Palestine”.

For her part, the Japanese Miho Shimma fights relentlessly against nuclear weapons, choosing among other things, to address children. “One day I saw French children playing atomic warfare,” she says; that’s how her book l’Enfant Bonheur was born, now published in French but also translated into English, Italian, German and even an Indian language.

“Women are the first victims of global warming in many countries”

Women who work for peace also do so for more equality. In Germany, Birgitta Meier testifies, the peace movements work in convergence with the feminist movements and also the environmental movements. “We cannot do peace education without showing the role that women play in advancing these ideas, but without also approaching environmental movements since women are the first victims of global warming in many areas countries”.

Feminism and the environment was also discussed by Mina Cheballah who is leading a project in Algeria with feminist activists working with women farmers. “The culmination of the project is the safeguarding of ancestral seeds by the creation of a community seed bank in order to allow farmers to no longer depend on the big firms which force them to buy seeds every year.”

International firms also indicted by Miho Shimma in the name of her commitments to the cities of Hiroshima and Nagasaki but also to the Bikini Atoll where she is from and which still bears the after-effects of the American nuclear tests of the 1970s. “When I disseminate information on atomic bombs, I am not only talking about the victims of nuclear weapons, I am also talking about the victims of nuclear tests.”

It’s the same concern for Tran to Nga. “I was under the bombardments, I buried comrades with my own hands.” 80 years old, she does not stop fighting against Agent Orange, responsible in Vietnam for many deaths and malformations still present on the site. fourth generation of population. “I started out on my own”, she says, referring to the too long trial that has occupied her for ten years – “but today I have thousands and thousands of friends around me all over the world, and my fight will continue because Agent Orange is the ancestor of pesticides and other toxic products which continue to poison our Earth.”

These determined women, despite the magnitude of the task, retain their enthusiasm in their struggle for peace. And which is perfectly illustrated by the conclusion of young Sarah: “for me, peace today is promoting social ties because it is the ignorance of other cultures which leads if not to war at least to fractures between human beings. . Unfortunately, I feel that this sense of combat is lost a bit with my generation when we could bring our skills to associations.” An observation which is perhaps already the beginning of a commitment.