An article with photos from Left Voice

Millions across Latin America took the streets on March 8 for International Women’s Day. All over, the message was clear: women want an end to all violence and oppression. 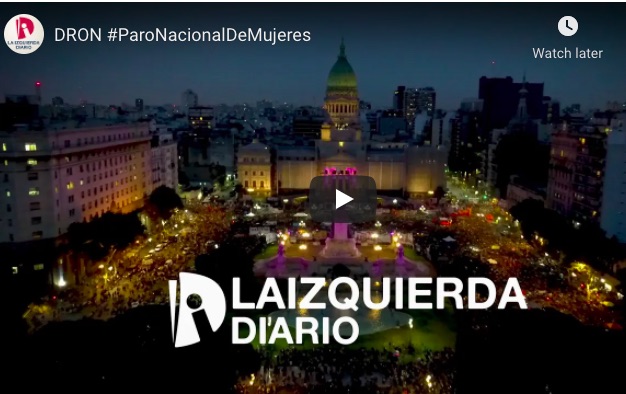 In the past few years, the day has taken on new life with massive mobilizations around the world. Here, we highlight some of the biggest mobilizations in Latin America.

In Chile, millions gathered across the country for a historic International Working Women’s Day demonstration on March 8. In the capital city of Santiago alone, over a million people took to the streets and squares. A giant green bandana was laid in the heart of the square by the socialist-feminist group, Pan y Rosas, and read a central demand for women across Latin America — that of free, legal, and safe abortions. 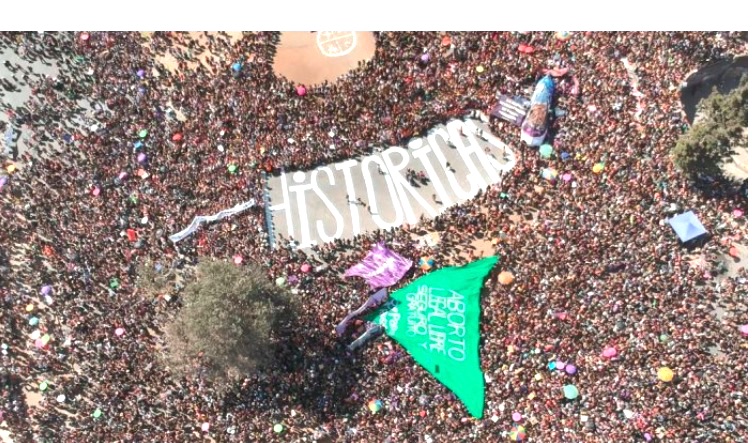 The massive protest in Santiago, Chile

The mobilizations in Chile are particularly noteworthy since they occur amidst ongoing protests against the political regime. In the days leading up to Sunday, March 8, hundreds of thousands gathered in the central square in Santiago and the front-line of the protests, Plaza de la Dignidad, chanting “Chile Despertó”, that “Chile has woken up”. The marches and demonstrations before and on March 8 put the demands of the movement front and center. Chants and slogans amplified the months-long demand for the resignation of the President, Sebastian Piñera, and against the repression by the police who have mercilessly unleashed violence on the protesters for months.

Since March 8 was on a Sunday, various women’s organizations as well as coordination groups called for a strike on Monday, March 9. However, due to the lack of support from unions, these strike actions were confined to particular workplaces, as opposed to last year’s general strikes against the Pinera government. The Chilean state prepared for the strike actions by gathering its repressive forces, putting up road blockades  in key neighborhoods in Santiago, and violently attacking and arresting school students  who were making their way to Plaza de la Dignidad. In the Antofagasta, a town that has become central to the coordination of the anti-government movement, teachers, education workers, and students are playing a central role to ensure the success of the strike. In addition to demanding an end to the Piñera regime, they’re making historic demands for better working conditions, including free public education.

In Mexico, hundreds of thousands gathered across the country for demonstrations on March 8. In Mexico City, over 150,000 women turned out to protest inequality, violence, and oppression, while the march in the western city of Guadalajara was over 30,000 strong. This was the biggest March 8 protest in Mexican history. On March 9,  many women walked off the job for “A Day Without a Woman.” 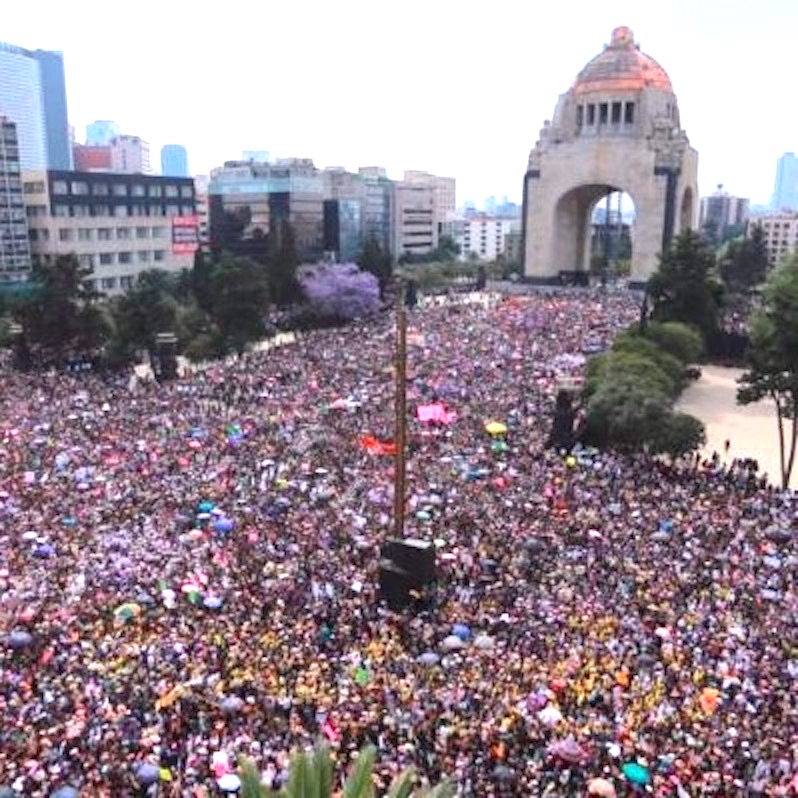 The primary motor for the protest was the indignation with femicides, which are all too common in Mexico. Femicides in Mexico have increased by 137% in the last five years. In 2019 alone, about 10 women were killed every day. Thousands more have gone missing.

Protesters also spoke out against the precariousness of work and layoffs due to austerity measures. In Mexico City, over 1,000 people marched with Pan y Rosas, the socialist feminist group with a clearly anti-capitalist and anti-patriarchal message that for the end of women’s oppression and for socialist revolution.

These demonstrations have been the largest mobilizations since the beginning of Andrés Manuel López Obrador’s presidency in 2018. López Obrador overwhelmingly won his election on the basis of progressive rhetoric and promises . However, while in office López Obrador has maintained austerity measures and has not taken steps to stop the epidemic of femicides in Mexico— in fact, femicides have increased during his mandate. The right to an abortion is still confined to Mexico City and Oaxaca, leading to countless deaths due to illegal and unsafe abortions.

Nearly 300,000 people took the streets in Montevideo, Uruguay on March 8. This year, March 8 was particularly important due to the rise of a right-wing government in Uruguay. As La Izquierda Diario Uruguay writes, “The threat that all these reactionary sectors make is the loss of our historical conquests such as the right to abortion or marriage equality. They are religious and anti-rights sectors that today feel impunity to wave their flags provocatively because they are backed by the State.” In fact, in the days before the march, police repression increased against street vendors and youth in working class neighborhoods. 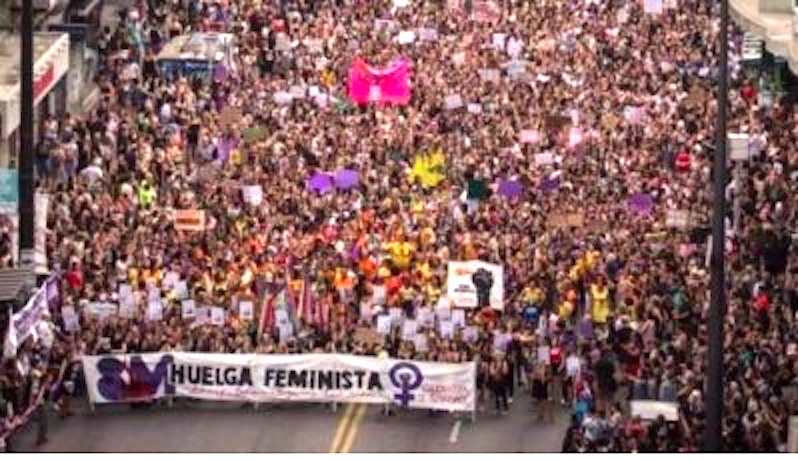 At the International Women’s Day March, the police were out in full force, with water cannons and riot gear, prepared to act against the marchers.

Over a hundred thousand people across Argentina mobilized on March 9 for International Working Women’s Day. A Catholic mass against the right to an abortion on March 8 and there were smaller actions for the right to an abortion by left and feminist groups. One of the primary debates among organizers o the feminist movement had to do with the day of protest. Feminist groups that support the Alberto Fernandez government argued against a confrontation with the Catholic church on March 8, while other left and feminist groups stated that it was important to rally on International Women’s Day. 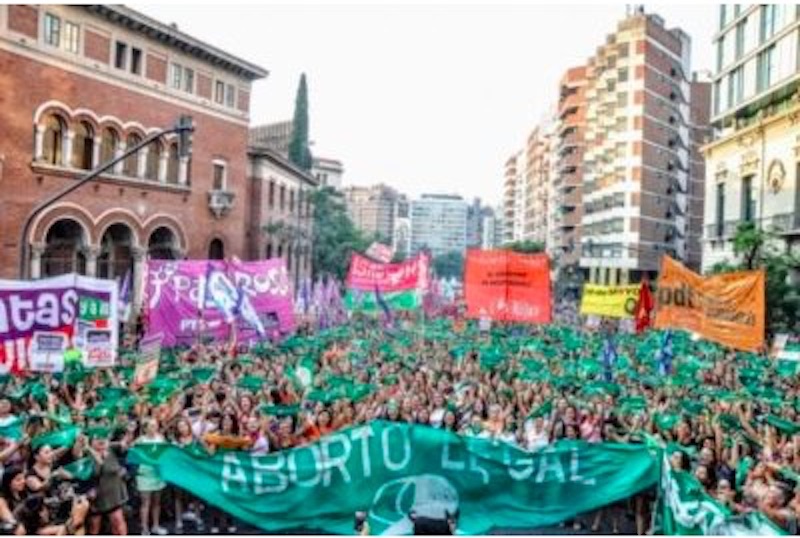 Even so, on March 9, hundreds of thousands of people throughout the country mobilized, demanding the separation of church and state, the right to an abortion, as well as against femicides. The official statement also said “The debt is owed to us, not the IMF and not the church.”  This is particularly important in the context of a massive economic crisis in Argentina and the massive inflation rate.

Members of the socialist feminist group Pan y Rosas began the day with an action and road blockage in solidarity with teachers that are currently fighting for a salary increase and better working conditions in smaller cities in Argentina. Nathalia González Seligra, a leader of the teachers union in the neighborhood of La Matanza said “While the government wants to negotiate with the IMF and the bondholders, who take millions of dollars from the country, the education workers — overwhelmingly women — have no choice but to work two or three charges to make ends meet.”

Argentina has had one of the strongest feminist movements in the world over the past five years, starting with massive protests against femicide under the banner of Ni Una Menos (not one less) in 2015. March 8 was revived as a day of massive protest bringing out hundreds of thousands of people starting in 2017. And last year, well over a million people took the streets for the right to an abortion, which was narrowly denied due not only to votes from the right wing parties, but also votes from the “progressive” Peronist coaltion that is now in the government.

A few days ago, the President of Argentina announced that he would present a law to Congress to legalize abortion — seemingly a different law than the one written by the feminist movement and presented to Congress last year. The new law hasn’t been made public yet, although there was some speculation that it would be presented yesterday for International Women’s Day.

From Santiago to Mexico City, millions took to the streets waving green bandanas for abortion rights. Throughout Latin America, the message was overwhelmingly similar — women want an end to violence and oppression. As the anger at the demonstrations show, even “progressive” governments have been inadequate in addressing even the most basic demands of the feminist movement. The growth and interventions of groups like Pan y Rosas, however, show us a path to victory: one built with a coalition of working class women, students, and youth that can challenge the very capitalist system that exploits and oppresses us.

This article was based on articles from the La Izquierda Diario news network.