A statement from UN Women

International Women’s Day this year comes at a difficult time for the world and for gender equality, but at a perfect moment to fight for transformative action and to salute women and young people for their relentless drive for gender equality and human rights. Our focus is on women’s leadership and on ramping up representation in all the areas where decisions are made – currently mainly by men – about the issues that affect women’s lives. The universal and catastrophic lack of representation of women’s interests has gone on too long. 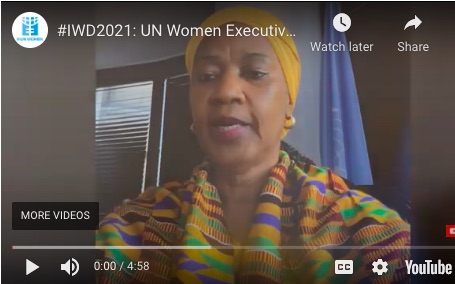 As we address the extraordinary hardship that COVID-19 has brought to millions of women and girls and their communities, we also look ahead to the solid opportunities of the Generation Equality Forum and Action Coalitions to bring change.

During the pandemic, we have seen increased violence against women and girls and lost learning for girls as school drop-out rates, care responsibilities and child marriages rise. We are seeing tens of millions more women plunge into extreme poverty, as they lose their jobs at a higher rate than men, and pay the price for a lack of digital access and skills. These and many other problems cannot be left to men alone to solve. Yet, while there are notable exceptions, in most countries there is simply not the critical mass of women in decision-making and leadership positions to ensure that these issues are tabled and dealt with effectively and this has affected the pace of change for women overall.

There are breakthroughs to celebrate, where women have taken the helm of organizations such as the World Trade Organization, the International Monetary Fund and the European Central Bank and we look forward to more such appointments that help to change the picture of what a leader looks like. Yet this is not the norm. In 2020, as a global average, women were 4.4 per cent of CEOs, occupied just 16.9 per cent of board seats, made up only 25 per cent of national parliamentarians, and just 13 per cent of peace negotiators. Only 22 countries currently have a woman as Head of State or Government and 119 have never experienced this – something that has important consequences for the aspirations of girls growing up. On the current trajectory, we won’t see gender parity in the highest office before 2150.

This can and must change. What is needed is the political will to actively and intentionally support women’s representation. Leaders can set and meet parity targets, including through appointments for all executive positions at all levels of government, as has occurred in the few countries with gender equal cabinets. Special measures can work; where countries have put in place and enforced quotas, they have made real progress on women’s leadership, as have those that have policies to address representation. Where these measures do not exist, progress is slower or even nonexistent and easily reversed.

No country prospers without the engagement of women. We need women’s representation that reflects all women and girls in all their diversity and abilities, and across all cultural, social, economic and political situations. This is the only way we will get real societal change that incorporates women in decision-making as equals and benefits us all.

This is the vision of the 2030 Agenda and the Sustainable Development Goals and the vision of the Beijing Declaration and Platform for Action. It is the vision of civil society and multitudes of young people who are already leading the way and of all those who will join us in the Generation Equality Action Coalitions. We need bold decisive action across the world to bring women into the heart of the decision-making spaces in large numbers and as full partners, so that we can make immediate progress on a greener, equitable and inclusive world.