A news article from Mayors for Peace

In October 2003, Mayors for Peace launched the 2020 Vision (Emergency Campaign to Ban Nuclear Weapons, hereinafter referred to as “the Vision”, see Appendix I), a set of concrete action guidelines aiming for the abolition of nuclear weapons by 2020. Based on this Vision, Mayors for Peace has promoted various initiatives aimed at achieving total elimination of nuclear weapons while the hibakusha (atomic bomb survivors) are still alive. In spite of our best efforts, these initiatives did not lead to global abolition by 2020. However, we have taken solid steps toward that goal with milestones such as the entry into force of the Treaty on the Prohibition of Nuclear Weapons (TPNW). 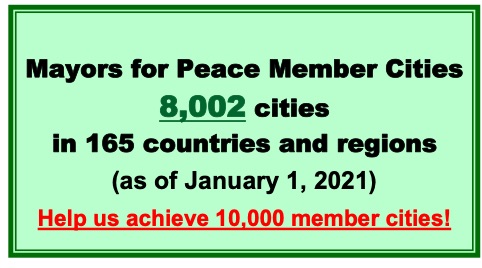 In conjunction with our initiatives implemented under the Vision, we have committed ourselves to the expansion of our membership. As a result, Mayors for Peace has grown into a global network of cities for peace, composed of over 8,000 member cities all around the world. By expanding our membership, we are establishing a concrete foundation for municipalities both to share challenges more directly related to the activities of local governments, as encapsulated in our objective of “realization of safe and resilient cities,” and to promote greater collaboration throughout a wide range of fields toward the abolition of nuclear weapons.

The Vision has acquired an excellent reputation and many have expressed their support for it to date—including the former Secretary-General of the United Nations Ban Ki-moon, the EU Parliament, the United States Conference of Mayors (USCM), International Physicians for the Prevention of Nuclear War (IPPNW), United Cities and Local Governments (UCLG), the Japan Association of City Mayors, and the National Council of Japan Nuclear-Free Local Authorities. Notably, the USCM has unanimously adopted Mayors for Peace resolutions for 15 consecutive years since 2006.

Based on the Vision and with the hibakusha’s sincere desire for peace at its core, Mayors for Peace has been engaged in various activities (see Appendix I) to foster and expand international public support for the abolition of nuclear weapons in partnership with our diverse partners around the world, including member cities, their citizens, and many peace NGOs.

In particular, we have taken the opportunity to actively promote the principles of Mayors for Peace while attending United Nations conferences concerning nuclear disarmament, which are precisely where the norms of international society are established. These principles have been formulated both through years of persistently implementing initiatives in solidarity with other NGOs, and through carrying out activities with citizens of our member cities, such as petition drives among many others.

Amid such circumstances, in the process of drafting and negotiating for the TPNW, Mayors for Peace proposed to add an article or clause to enable later development of the treaty as circumstances evolve. The proposed addition would cover crucial issues such as verification, in order to ensure wider participation in the treaty, including by the nuclear-armed states. Such an article was subsequently stipulated in the text, and the TPNW was successfully adopted at the United Nations in July 2017. In October 2020, the number of countries ratifying the treaty reached 50, and it entered into force on January 22 this year.

Thus, two out of the four objectives set in the Vision, “immediately start substantive negotiations toward a universal nuclear weapons convention” and “conclusion of a nuclear weapons convention”, bore fruit as the TPNW, bringing beneficial and progressive outcomes. The international legal obligation not to produce, possess, use, or threaten to use nuclear weapons has been substantially reaffirmed and strengthened by the entry into force of the TPNW. Nuclear weapons are now even more stigmatized, making it much more difficult for the nuclear-armed states to use them in actual practice. However, the treaty does not legally bind nations beyond its contracting parties. Without the nuclear-armed states concluding the treaty, we expect that achievement of the global abolition of nuclear weapons will not be immediately forthcoming.

The two other objectives, “immediately de-alert all nuclear weapons” and “physical destruction of all nuclear weapons,” yet remain. The nuclear stockpile of the world did indeed decline in number, from over 16,500 in 2003, when the Vision was promulgated, to about 13,400 in 2020. Yet the current international situation surrounding nuclear weapons has worsened, with no prospect of achieving these two objectives in the near future. Specifically, nuclear disarmament under the Nuclear Non-Proliferation Treaty (NPT) regime is now stagnant. Notably, while the United States and Russia together possess more than 90 percent of the world’s nuclear weapons, their progress on nuclear disarmament has stalled, to the point that they have even stopped negotiations. Nuclear arsenals are being modernized, and nuclear warheads are getting smaller in size—in other words, being upgraded for more likely use. Progress toward the abolition of nuclear weapons is backsliding.

With the threat felt at this alarming trend and with growing recognition of the unacceptable humanitarian consequences of nuclear weapons, since around 2010, there has been a change in the perception of nuclear disarmament by non-nuclear weapon states. In the past, nuclear disarmament was discussed mainly in terms of security assurance between nations. However, it has now come to be addressed more with a humanitarian approach that stresses the inhumane nature of nuclear weapons. The non-nuclear weapon states, along with NGOs and civil society actors including Mayors for Peace, took action to affect this change and support each other in doing so. Such actions formed a solid base for the birth of the TPNW, and allowed the voices of the hibakusha to be highlighted in the text of the treaty.

While promoting substantial initiatives under the Vision, Mayors for Peace has been taking concrete steps to expand and strengthen its global network of cities in solidarity across borders. In terms of its degree of influence as an organization and its comprehensive activities, it has grown into an entity expected to achieve tangible and successful outcomes. The following are achievements obtained through the implementation of substantial initiatives under the Vision.

The first of these is the expansion of our membership. Our network has grown more than 14-fold, from 554 member cities in 107 countries and regions in October 2003, when the Vision was announced, to 7,974 member cities in 165 countries and regions as of December 2020. This outstanding development shows that we have succeeded in spreading the peace-seeking spirit of Hiroshima and Nagasaki throughout the world, thus expanding the base of members of the public who support the philosophy and principles of the Vision.

With the growth of our membership, we identified a new objective as our second pillar: “realize safe and resilient cities” in drawing up the current Action Plan (see Appendix II) developed in 2017. This pillar is set forth to proactively promote efforts by member cities to address local issues they confront that are unique and distinctive to their respective regions. Although taking a different approach than the first pillar (“realize a world without nuclear weapons”), it is rooted in the same earnest desire of citizens for peace. The second pillar represents Mayors for Peace’s role as a network of local governments from all around the world that work together in solidarity to address and resolve global issues.

Furthermore, since the late 2010s, we have been further strengthening our activities to stimulate young people, the future leaders of society, to take an interest and be engaged in peace activities. These include running the Youth Exchange for Peace Support Program, hosting young officials from member cities in Hiroshima, and holding the Children’s Art Competition “Peaceful Towns.” These initiatives are not only enhancing the sustainability of peace activities in member cities around the globe, but also building the groundwork for Mayors for Peace to be a permanent presence that pursues and realizes its mission well into the future.

4. Our Forthcoming Challenges: The Next Vision

The next Vision will be outlined and adopted at the 10th General Conference of Mayors for Peace, which has been postponed to August this year. It goes without saying that its centerpiece will be the first pillar of the current Action Plan, “realize a world without nuclear weapons.” As mentioned above, in the midst of stagnation in nuclear disarmament, the entry into force of the TPNW does indeed shine a light of hope. Yet many challenges remain to make the treaty a comprehensive and fully effective legally binding instrument.

First of all, encouraging further participation in the treaty is of critical importance to secure the TPNW’s greater influence in international society. With this greater influence, we will urge the nuclear-armed states and their allies to participate in discussions for effective implementation and development of the treaty, to attend meetings of States Parties as observers, and ultimately, to become States Parties. Upon the 50th ratification of the treaty, Mayors for Peace immediately issued an open letter making such an appeal, and we plan to attend the first meeting of States Parties, to be convened within one year, as an observer. It is also significant to address the existing NPT, which fundamentally shares the same ultimate goal of abolishing nuclear weapons. At the 2020 NPT Review Conference, which was postponed to August 2021, we will once again faithfully convey the hibakusha’s urgent plea—“no one else should suffer as we have”―to press national governments on abolition.

In addition, the 11th Executive Conference of Mayors for Peace, held in November 2019, agreed to set forth “promote a culture of peace” as a third pillar, to be newly included in the next Vision. Promoting “a culture of peace” is an essential objective in order to cultivate peace consciousness in civil society and stimulate members of the public throughout the world to be active for peace. This will, in turn, create real momentum for peace and prompt policymakers to take decisive leadership for policy changes toward the abolition of nuclear weapons.

Mayors for Peace is therefore determined to: work for further expansion of its membership, aiming to achieve 10,000 member cities; strengthen initiatives in close and robust global coalition with member cities, including those in nuclear-armed states and their allies; accelerate and make substantial progress on nuclear disarmament; and continue our utmost efforts toward the ultimate goal—the abolition of nuclear weapons and realization of lasting world peace.