A press release from the World Social Forum

From January 23 to 31, the World Social Forum will celebrate its 20th anniversary online: already nearly 5,000 people and 700 organizations have registered and thousands more are expected.

The world civil society will meet at the World Social Forum (WSF) from January 23 to 31 2021, hoping to provide answers to the urgent challenges imposed by the current global situation. It will thus celebrate its 20th anniversary with a virtual edition against the backdrop of the pandemic. 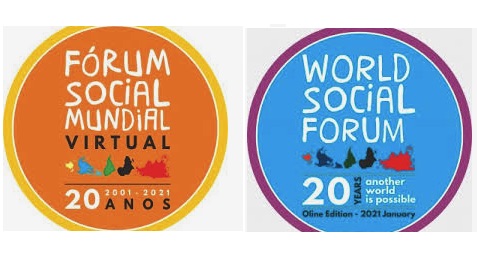 Since its creation in January 2001 in Porto Alegre, Brazil, by passing through India, Pakistan, Senegal, Kenya, Tunisia, Canada and many others, the World Social Forum has been the largest convergence process of global civil society organizations, mobilizing hundreds of thousands of people throughout its history. For this edition, nearly 5,000 people and 700 organizations from all horizons have already registered and will take part in the hundreds of activities proposed by the participants themselves. It is expected that thousands more people will join the activities that will take place during the 9 days of the WSF, to reaffirm that another world is possible, necessary and urgent.

A rich program planned for the virtual stage of the WSF:

On January 23rd, there will be a great virtual march for democracy, human dignity and for our future on the planet! Broadcasting of videos from organizations, testimonies of activists from all over the world and a Global Opening Panel with important social and political activists from the five continents, including : Aminata Dramane Traoré, Luiz Inácio Lula da Silva, Leila Khaled, Ashish Kothari, Miriam Miranda and Yanis Varoufakis.

From January 24 to 29, major conferences will be held in each of the nine thematic areas of the virtual WSF: Peace and War, Economic Justice, Education, Communication and Culture, Society and Diversity, Indigenous and Ancestral Peoples, Social Justice and Democracy, Climate, Ecology and Environment. Look at the different activities here.

On January 30th, the Convergence Assemblies will prepare the Agora of the Futures held on January 31st, a pivotal moment where social movements and organizations from around the world will be able to share their initiatives and build a calendar of actions to be implemented until the next edition of the WSF (click here to see the general program of the WSF

Through the email below, the WSF Facilitating Group remains at the disposal of the media around the world for any questions or clarifications.

(Thank you to Azril Bacal for sending this to CPNN)

One thought on “World Social Forum 2021”