An article by: Merle Hoffman in We-news

Have you seen those extraordinary photos? The women of Poland, thousands and thousands of them, pouring into the streets, disrupting business as usual and denouncing the government’s new ban on abortion. They carried symbols of red thunderbolts, umbrellas and wire coal hangers – hangers! A universal symbol of dangerous, illegal abortions which they refused to accept. 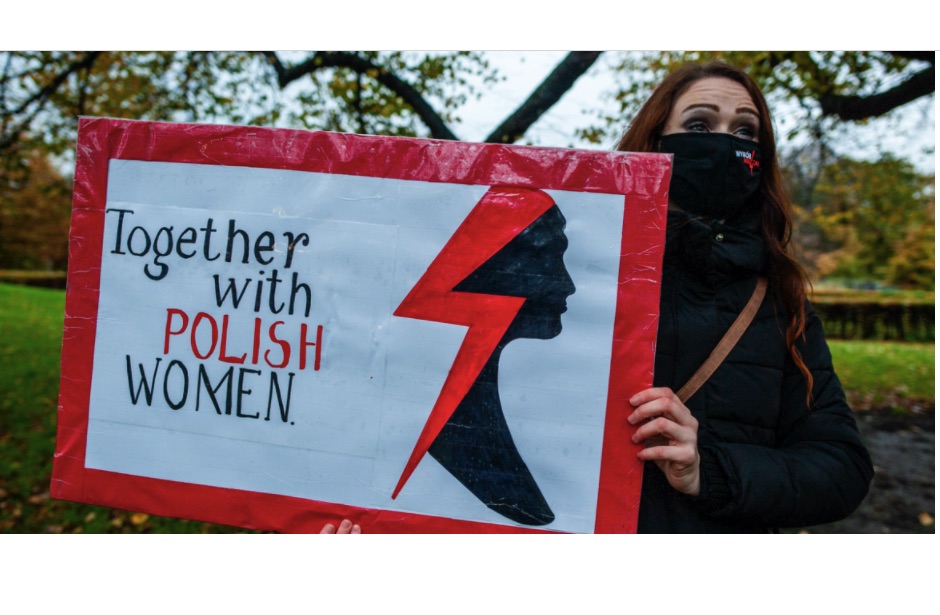 I immediately flashed back to the action I had led decades earlier in front of St. Patrick’s Cathedral in NYC in 1989, surging across Fifth Avenue with hundreds more to the Cathedral steps. I held high a six-foot replica of a wire hanger, chanting with the many others, “Not the Church, not the State, Women will Decide our Fate!” Two of our crew stood before the massive bronze doors and held up a huge Proclamation which began, “On behalf of the women of New York City and their sisters throughout the country and out of love for the truth and the desire to bring it to light, we stand here today…”

This action was inspired by then Cardinal O’Connor’s active support for anti-abortion blockades of clinics. It was the first pro-choice civil disobedience action, an historic event that could not be ignored by the media. The New York Times quoted me as saying, “Women’s rights are in a state of emergency,” and the Philadelphia Enquirer stated the action marked “an important strategic change in the movement.” Oh, how I want to be there in Poland with these fearless and inspiring women, storming into the streets and challenging government and religious institutions. Marching and chanting, full of revolutionary rectitude!

Unfortunately, it wasn’t possible to travel to Poland directly due to the Coronavirus, but I needed to do something. I contacted a feminist academic and writer in Warsaw involved in the protests. I was asked to write a letter of support from American Feminists that could be widely disseminated and published in a major newspaper. So I did, and Phyllis Chesler, Gloria Steinem, Frances Kissling, Naomi Wolf and others soon signed on. (See the letter, below.) It was published earlier this week in both Polish and English in the women’s extra to Poland’s largest daily news outlet, GAZETA WYBORCZA and was shared widely on social media by The Women’s Strike (the leading organization behind the demonstrations) as well as by local women’s groups. (Read article here.)

[Editor’s note. Another letter of support for the struggle of Polish women was written by Amnesty International, Human Rights Watch and the Center for Reproductive Rights.]

Just as I am now inspired by the courage of the Polish women, so was I inspired to travel to Russia and assist in developing women’s health services there when I heard the story of one woman who came to Choices Women’s Medical Center for her 36th abortion. I was also inspired by attacks on women’s clinics to organize the St. Patrick’s action, and I have been inspired to carry on this work at Choices – with my wonderful staff – by the memory of holding the hand of the first patient who stepped through our doors nearly 50 years ago. It’s always the women’s stories, the women’s needs and women’s bravery.

The good news from Poland today is that the courage and persistence of Polish women have forced the government to pause and step back from implementing its all but total, viciously cruel ban, even forbidding abortions where the fetus has severe abnormalities. The fight is not over, but we are confident the women of Poland will continue to inspire the rest of us.

To the Great Women of Poland,

The world is in awe of your principled activism and is filled with admiration for your courage and commitment. American Feminists stand with you. We salute and support you with love and pride.

You have marched by the thousands in response to the October 22nd Tribunal ruling which denied abortion even in cases of fetal abnormality in what has been called the largest demonstration in the country since the fall of communism.

Ignoring threats of prosecution, violence from the Right, and the dangers posed by a surging Coronavirus, while displaying symbols of Red Thunderbolts, Hangers and Umbrellas, your resistance intensifies daily. You have challenged formerly “untouchable” institutions and are a stellar example of what people everywhere need to do in the fight against oppression and for women’s freedom.

Julia Przylebska, President of the Tribunal, has stated that allowing abortions in cases of fetal abnormality legalizes “eugenics” and because the Polish Constitution guarantees a right to life, terminating a pregnancy based on the health of the fetus amounts to “a directly forbidden form of discrimination.” This latest ruling imposes a near total ban in Poland that already has some of the strictest abortion laws in Europe.

You have had the courage to say no to this egregious diminishment of women’s humanity and moral agency.

Legal abortion is an integral core of women’s health and is the necessary condition for women’s freedom. We all know that nothing stops abortion – no law, no government, no religious authority. Making abortion illegal only makes it dangerous and deadly.

You demand legalization of abortion in the name of all your daughters, mothers, sisters, and grandmothers who alone and in pain lost their lives in back alleys or on dirty kitchen tables for their right to choose.

Women of Poland-We stand with you and attest that Women’s Rights are Human Rights.

Women are full moral agents with the right and ability to choose when and whether or not they will be mothers.

Abortion is a choice made by each individual for profound personal reasons that no man nor state should judge or control.

The right to make reproductive choices is women’s legacy throughout history and belongs to every woman regardless of age, class, race, religion, ethnicity, or sexual preference.

Abortion is a life-affirming act chosen within the context of women’s realities, women’s lives, and women’s sexuality.
Abortion is often the most moral choice in a world that frequently denies healthcare, housing, education, and economic survival to women.

Women’s rights remain in a state of emergency. If not now, when? If not you–then who?

We stand with you in solidarity