A festival marking the UN’s 75th anniversary and addressing the overwhelming insecurity induced by Covid-19 was sponsored on October 18 and 24 by the United Nations Association of London, Peace Child International and the Polden Puckham Charitable Foundation. Here are the results from the peace and security workshop. 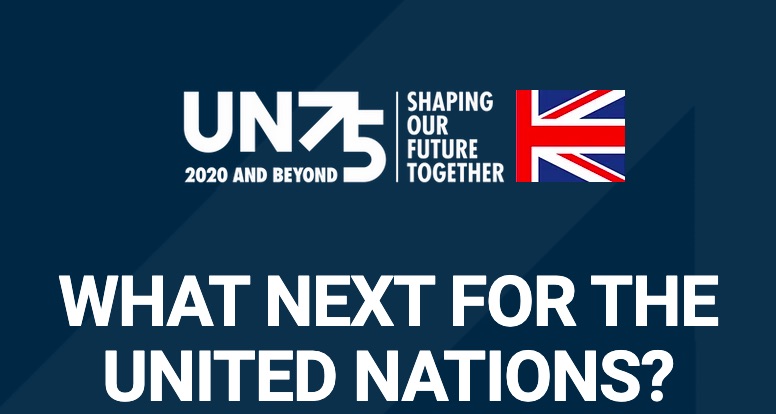 For improvements in issues such as health, food, the economy and the environment and digital transparency and equity to gain a firm hold in the community, the presence of peace is vital. To show how we approach this challenge, we use the UN’s Culture of Peace Initiative to break down peace into manageable elements. These are Education for Peace; Sustainable Development; the Equality of Women; Human Rights; Disarmament and Security; Democratic Participation; Tolerance and Solidarity; and the Free Flow of Information. The UN General Assembly proclaimed 2001-2010 to be the UN Decade for the Culture of Peace.

1 Education for Peace
Need for capacity development Education, by its nature, shapes and transforms society, playing a key role in peacebuilding. Capacity development issues for conflict prevention should aim to improve individual skills and organisational procedures, mitigating the risk of conflict. It must also assist educational planners on conflict prevention measures , ensuring they have skills and knowledge necessary for the development of curricula that reflect principles of peacebuilding, tolerance and human rights.
Strengthening the role of youth Education policy-makers and planners can benefit from emerging thinking on how young people learn to adapt their education and training systems as part of the technological age, and thereby help them become leaders and role models in society both within and outside school. Youth can be mobilised to contribute to conflict prevention and peacebuilding activities with different groups of students, acting as mentors and mediators to younger children and peers, participating in intra-community projects, especially in sensitive areas, and humanitarian and emergency aid, taking on electoral responsibilities, and managing cultural of peace centres.

2 Sustainable Development
Security Council: an obstacle The UN Security Council’s delay in support the Secretary-General’s call for a Global Ceasefire shocked all, especially as UNICEF reported 250 million children caught in the armed conflict. That impasse hindered sustainable development in many ways. The UN’s 70-years old Uniting for Peace resolution, first used in 1950 when the Security Council failed to act, allows the General Assembly to take over in such cases and ‘use all means to maintain international peace and security’. Further use of the Uniting for Peace option could make it clear to the five permanent member states that they should reform – or get out of the way.
Smart Sustainable Cities In 30 years, 70% of us will live in cities so the Smart Sustainable Cities project offers an effective solution to the world’s growing population. By integrating technology with sustainable management strategies, we can utilise resources more efficiently. A healthier environment, optimised traffic flow and sanitation systems, can give cities in developed and developing countries the chance to reduce the knowledge gap. This resonates with the UN’s SDGs, and with civic leadership, an important condition for the Culture of Peace Initiative is secured.

3 Equality of Women
Women on the front foot Whereas the UN’s challenge had traditionally been the protection of women, it agreed in 2000 a new approach, to bring women to the forefront in overcoming the challenges to peace, especially in peacekeeping. In 1993, women made up 1% of UN peacekeepers, now 6%, and 10% in UN police but for 2028, it plans to raise these to 15%, and 20% in police units. To expedite this, the UN will bring in better recruitment, retention and training and provide better accommodation, sanitation, health care and protective equipment.

Women on the front line These initiatives help women from the communities where the UN peacekeepers are deployed. The claim, once thought as extravagant, that ‘There is no sustainable peace without the full and equal participation of women’ is now accepted. In Sudan, it was brave women who were the driving force in the protest movement. In African SADC states , 50% of election candidates must be women. Women leaders in African states are true game changers. We must support them.

4 Human Rights
Support the UN Peacebuilding Commission Early operationalising of pre-emptive conflict prevention can work towards an ideal environment of ‘Positive Peace’ in which elevated economic and societal outcomes, paired with a diminished number of grievances, lowers levels of violence and the will to resort to it. Positive peace can be easily understood as a society free from the structural problems that would lead its citizens to resort to violent actions.
Expand Accountability Mechanisms to Defend International Human Rights Through building on initiatives such as the Responsibility to Protect, UN member states must commit to upholding human rights standards, initiate unanimous international reactionary efforts when violations begin to occur, and cultivate a normative shift towards a culture that rejects human rights violations and resort to conflict as viable options.

5 Disarmament and Security
Support the #ICANSAVE My City campaign By happy chance, UN Day witnessed the ratification of the 2017 UN Treaty on the Prohibition of Nuclear Weapons and was welcomed by many. The most effective support for this is through the #ICANSAVE MY CITY campaign started by ICAN which was awarded the 2017 Nobel Peace Prize. Using social media, all should campaign for their own city to join the programme
Lethal Autonomous Weapons (killer robots) Young people should support initiatives like Pugwash, currently organising an ethical science festival for young people and extending their mission beyond nuclear weapons to tomorrow’s horror weapon, the killer robot. University UN societies across the country could lead workshops for younger people in the surrounding areas.

6 Democratic Participation
Youth involvement More than ever before, the UN seeks to link with today’s youth. Research shows that the young and those in developing countries are more optimistic about the future than their elders. And yet, new surveys report young people in the USA, UK and Australia are questioning the value of democracy. In response, we must ensure youth is represented even in the highest fora, starting with a UN Youth Council, despite local and national cultural obstructionism.
Listening to minorities The Black Lives Matter initiative challenges even the liberal minded to review perceptions of others.
Communities link up worldwide The Open Government Partnership linking governments and civil society in 78 countries encourages rich and poor to showcase successful case studies and identify ‘bright lights’, those communities which are exemplars of reform. More voices, more progress.

7 Tolerance and Solidarity
Tolerance Tolerance is an important peacemaker being not the indifference we sometime show another, rather by showing curiosity in the other, a desire to understand the other side of the argument. Be the first to try to understand the other person!
Solidarity When the UN was founded, all had lived through a pandemic, a global depression, genocide and world war. They knew all about solidarity. How do we rate? Some countries took months to show such solidarity in joining the COVAX p rogramme even though ‘vacci-nationalism’ is not only unfair, but self-defeating. In preparing for the next pandemic, let’s show the same solidarity as shown in 1945.

8 Free Flow of Information<
Sharing best practice. Much media work in conflict management has focused on the media sector itself rather than examining its interplay with sub-systems and the overall system, itself in danger of overlooking necessary linkages between peacebuilding and state-building institutions and media institutions. To generate more effective media development in post-conflict environments, especially where internet access is poor, media-military dialogues can assist build trust and understanding between these two sectors and beyond, to the communities they serve.
Media regulatory reform This should play a role in political settlements in fragile states. The regulatory framework should accommodate proportionate political coverage of parties and mechanisms to include minority political and cultural interests. There must be clarity in setting guidelines for licenses to accommodate all media actors, including the small and independent.