An article by Daouda Yansané in Guinée Live (translation by CPNN)

If all goes as planned, the election of the President of the Republic of Guinea will take place on Sunday, October 18. Many Guineans are concerned that this election should take place in peace, understanding and acceptance. It is for this reason that the NGO Conseil de Réflexion pour une Guinée Nouvelle (CRGN) launched this Friday, October 10, 2020 in Dubréka, an awareness campaign for an inclusive, peaceful, transparent and credible election. 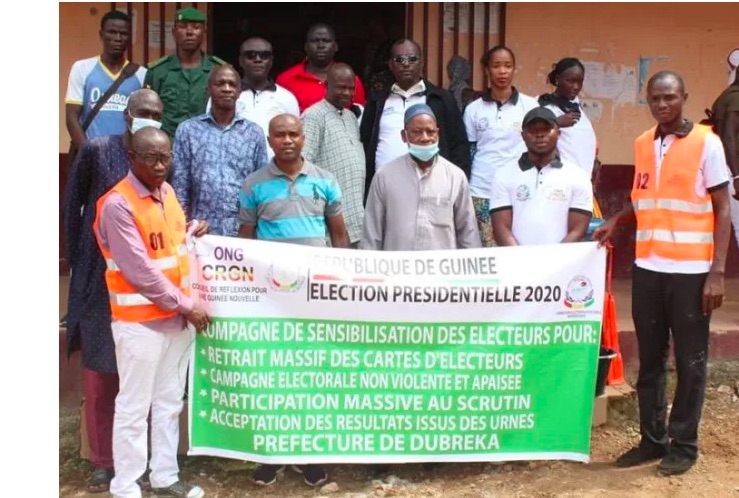 Meeting at the Higher Institute of Arts Mory Kanté of Dubréka, the representatives of the prefecture, local elected officials, the police, the actors of society and the CENI branches launched this activity.

According to the organizers, the objective of this awareness campaign is among others: Obtain a large participation of voters in the presidential election and guarantee an inclusive, peaceful, transparent and credible election; sensitize and educate citizens for a campaign without violence, civilized and peaceful, inform voters on how to vote in order to raise the turnout and thus make the ballot more credible, sensitize and educate citizens on the culture of peace, especially in times of elections; encourage a massive vote, etc.

In his presentation, CRGN coordinator Ismaël Koumbassa spoke at length about the importance of voting and asked everyone to participate in these presidential elections by voting on election day. He also asked everyone to preserve peace, social tranquility, national unity and above all to accept the results of the ballot box.

“We will deploy our agents not only in the prefecture of Dubréka, but also its six (6) sub-prefectures to carry out a door to door campaign before, during and after these presidential elections” added the coordinator of the CRGN.

After thanking the NGO Conseil de Réflexion pour une Guinée Nouvelle for the choice of its institute to host the launching ceremony, the Director General of the Higher Institute of Arts Mory Kanté of Dubréka, Professor Sidafa Camara invited each student to spread these messages to families and to neighborhoods in order to raise awareness among the majority of the population.

The ceremony ended with a note of hope for organizers including participants to have a peaceful presidential election.