An article by Judith Sanou in Le Faso

From November 12 to 14, 2020 the 5th edition of the Sotigui Awards will be held in Ouagadougou. The organizers of this event, namely the Académie des Sotigui, in partnership with FESPACO, held a press conference on Saturday, September 5, 2020, to announce the festival. [FESPACO is the Panafrican Festival of Cinéma and Télévision of Ouagadougou.] 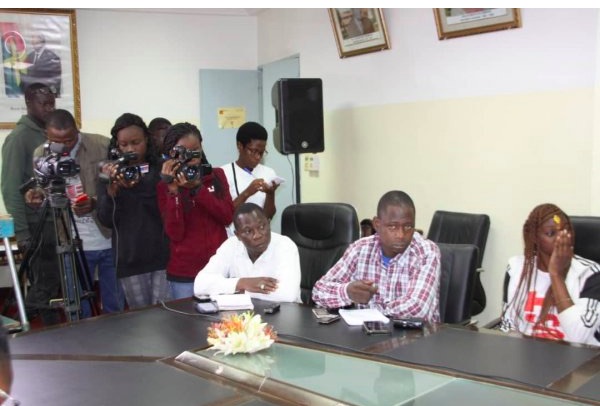 The participants in the press conference

Launched in 2015, Sotigui Awards is an initiative of the Academy of Sotigui, African Cinematographic Arts and the Diaspora, in partnership with FESPACO. This event aims to contribute to the recognition and enhancement of the profession of African actors and comedians. The 5th edition is held under the theme “Culture of Peace: The Contribution of Women in Cinema and Audiovisual? “.

According to the president of the Académie des Sotigui, Kévin Evrard Moné, this theme is justified by the observation that women of the 7th art continue to make their contribution in the face of adversities including terrorist attacks, the crisis of Covid-19 and all forms of violence experienced by women.

The 2020 edition, which will be held from November 12 to 14, features sixteen categories in competition and some innovations. It includes the opening of the “Sotigui of the African public” for almost all categories; the award ceremony which amounts to 20,000 CFA francs; and the organization of an “After Sotigui” with the movie stars in partnership with the Bravia Hotel.

While waiting for the award ceremony, participants can watch film screenings, a round table on the theme of publishing, practical training sessions in acting, and a panel on piracy organized by Canal +. All these activities will take place in compliance with barrier measures in this period of Covid-19, reassured Gustave Sorgho, commissioner in charge of external relations.

For this edition, special tribute will be paid to the actor Chadwick Boseman [whose Hollywood roles included Jackie Robinson and James Brown], who died on August 28 in Los Angeles. Also the concept “Hashtag – we dress as Africans” will be highlighted during this edition, a way of highlighting African culture in all its forms.