“During the pandemic, and despite international opposition, the economic, commercial and financial blockade imposed on Cuba by the United States for six decades has been tightened. A genocidal blockade that not only violates the human rights of Cubans, including the legitimate right to development, while denying and offending the sovereign right of other countries to sustain relations with Cuba,” stated Esteban Lazo Hernández, president of the National Assembly of People’s Power, during the recent Fifth Conference of Parliament Presidents. 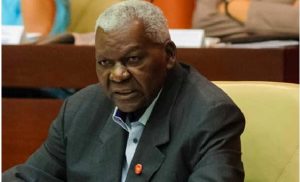 During the gathering, held online, Lazo, also a member of the Party’s Political Bureau, reiterated our country’s firm commitment to the purposes and principles of the United Nations Charter, that constitutes the foundation of multi-lateralism and a guide for international relations conducted by states.

“The democratization of international relations, and the culture of peace,” he continued, “require both recognition and respect, by all states, of the right of peoples to choose the economic, political and social system they consider appropriate, as well adherence to the principle of non-intervention in the internal affairs of other nations.”

“Cuban parliamentarians reaffirm that a truly strong and pro-active United Nations is needed, with a transparent Security Council that it duly democratized, and also a re-vitalized General Assembly, that supports states in the sovereign construction of the future each nation itself chooses, with no interference whatsoever,” he insisted.

Lazo, the country’s top legislative authority, rejected attempts to restore a unipolar world order; the United States’ failure to abide by international commitments the country has made; and its attacks on multilateral bodies.
He referred to Cuba’s humanist vocation and solidarity, during these difficult times for the world, providing assistance in 43 countries to support the COVID-19 battle with medical collaboration.

“The National Assembly of People’s Power of Cuba reaffirms our commitment to continue working with parliamentarians around the world in the establishment of a democratic, just international order, that responds to the demands for peace, security, stability, development and social justice for all peoples and contributes to fulfillment of the 2030 Sustainable Development Agenda. At the same time, we demand that developed countries supply developing countries the necessary aid to strengthen their scientific and technological capacity to advance toward more sustainable patterns of consumption and production,” Lazo stated.

“Cuban parliamentarians,” he added, “also defend international cooperation as the only way to confront global problems like climate change, terrorism and migration, that undermine peace. In this spirit, we condemn violations of the Charter and international law, including threats of the use of force against sovereign states, interventions, the imposition of unilateral coercive measures, and actions meant to provoke regime change, which jeopardize the maintenance of international peace and security.”

Lazo reiterated the Cuban government’s energetic, firm position rejecting and condemning all acts, methods and practices of terrorism, in all its forms and expressions.

He also noted, “The COVID-19 pandemic makes clear the need to pay attention to migrants’ health and sanitary conditions, as well,” adding that Cuba is strongly committed to safe, orderly migration, and aspires to a change in the current situation of inequality, inequity and poverty, to support a lasting solution to migratory problems.

Referring to the Conference’s central topic, the President of Cuba’s National Assembly emphasized that the representative body’s members support the principles that guide the country’s foreign policy, as codified in the Constitution of the Republic.