An article by Thomas Breen in the New Haven Independent

Peace will be on the ballot this November — in the form of a nonbinding referendum asking New Haveners how they’d like Congress to spend the majority of the federal budget.

On the military, as is currently the case? Or on jobs, education, environmental sustainability, and other human services instead? 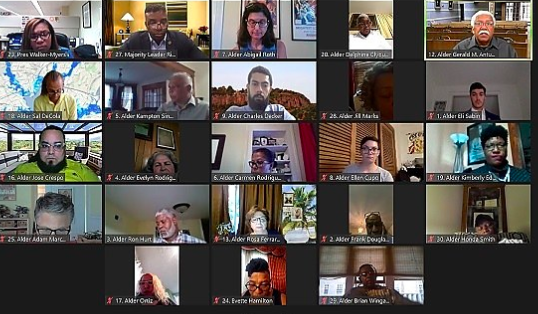 During Monday night’s regular monthly meeting of the full Board of Alders, local legislators voted unanimously in support of adding that question about federal spending priorities to the Nov. 3 general election ballot.

The non-binding advisory referendum, proposed by the city’s Peace Commission, will ask New Haveners the following question: “Shall Congress prepare for health and climate crises by transferring funds from the military budget to cities for human needs, jobs and an environmentally sustainable economy?”

Hill Alder Ron Hurt urged his colleagues to vote in favor of the resolution that included the ballot update. He said the purpose of the resolution and nonbinding referendum is to give New Haven voters an opportunity to weigh in on whether or not they would like to see Congress and the President “end foreign wars, scrap all nuclear weapons, rebuild infrastructure, and develop a new economy based on renewable energy.”

According to a June committee hearing on the item, 53 percent of the current federal budget is devoted to military spending. Many who testified during that two-and-a-half-hour hearing spoke of the perversity of this country spending so much on weapons and vehicles of destruction when that money could instead be going to bolster the nation’s public health infrastructure, which has so struggled to keep up with the pandemic. The Department of Defense’s budget, meanwhile, has proven seemingly impossible to audit because of bookkeeping errors, deficiencies, and irregularities.

In a press release put out after the vote, Downtown/Yale Alder Eli Sabin, who is the aldermanic representative on the Peace Commission, applauded the move. He quoted Peace Commission Chair Joelle Fishman as saying, “this ballot referendum will allow New Haven voters to express their hopes and dreams, and perhaps inspire other cities to do the same, building the momentum needed to create the political will for every person to be treated with dignity and respect, for every person to have health care, housing, a living wage job, food security, in a peaceful and sustainable world.”

Westville Alder and Health and Human Services Committee Chair Darryl Brackeen, Jr. is also quoted in that release as saying that supporting the peace resolution “is the right thing to do and now it’s time to hear from the people.”

Below is the resolution adopted by the Board of Alders Monday night. The title of the resolution is: From the Peace Commission, a Resolution calling on Congress and the President to prepare for health and climate crises by transferring funds from the military budget to cities and states for human needs, jobs, and an environmentally sustainable economy and placing a non-binding advisory referendum to that effect on the November 3, 2020 New Haven municipal ballot.”

Whereas, the severity of the U.S. economic crisis, compounded by the 2020 COVID-19 pandemic, has caused severe budget shortfalls at all levels of government, necessitating a re-examination of national spending priorities; and

Whereas, every dollar spent on the military produces fewer jobs than spending the same dollar on education, healthcare, clean energy and other beneficial programs; and

Whereas, U.S. military spending has ballooned to more than half of federal discretionary spending – more than during the Cold War, the Vietnam conflict, or the Korean War; and

Whereas, the United States trails many other nations in life expectancy, infant mortality, education, housing, and environmental sustainability;

Now, therefore, be it resolved that the Board of Alders of the City of New Haven, Connecticut calls on the U.S. Congress and the U.S. President to end foreign ground and air wars; refrain from new military ventures; work toward an end to all nuclear weapons; reduce military spending in order to meet human needs; promote job creation; re-train and re-employ those losing jobs in the process of conversion to non-military industries; rebuild infrastructure; assist municipal and state governments; and develop a new economy based on renewable energy.

Be it further resolved that the most honorable City Clerk of New Haven is hereby directed to accomplish any and all actions necessary to place the following non-binding advisory referendum on the November 3, 2020 municipal ballot:

“Shall Congress prepare for health and climate crises by transferring funds from the military budget to cities for human needs, jobs and an environmentally sustainable economy?”.