Inspired from having just watched Rep John Lewis’s poignant Memorial Service, allow me to make some “good trouble” by sharing the following FYI.  Rep John Lewis is a true Peace Hero to us at the Peace Alliance because he was an original cosponsor of the first Department of Peace bill introduced in Congress by former Rep Dennis Kucinich on July 11, 2001 (along with then Rep Bernie Sanders!). 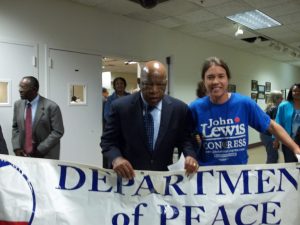 Unlike Bernie who moved on to the Senate, Rep Lewis continued to faithfully cosponsor the bill in each of the 10 additional congressional sessions it has been reintroduced (presently HR-1111 sponsored by Rep Barbara Lee of Ca).  Few other Members of Congress have that long-enduring distinction.

Our Georgia Dept of Peacebuilding Committee member had a wonderful relationship with Rep Lewis, so we often visited his office during our Advocacy Days in DC (first picture). 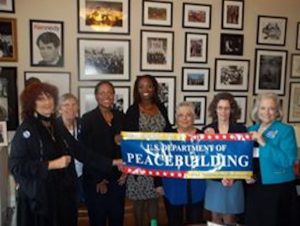 His Deputy Chief of Staff, Jamila Thompson, who just spoke at the Service, is in middle of the second picture.

We will sorely miss him making “good trouble” — “necessary trouble” for the culture of peace in the beloved community of our one world.

If you are not already on the Peace Alliance list of individual / organizational endorsements for the Department of Peacebuilding bill, now is a great time to do so.  Thanks.
https://peacealliance.org/wp-content/uploads/2020/07/DoPOrgEndorsements6-5-20.pdf