About twenty socialist, environmentalist and communist mayors gathered in the Loire Valley on Tuesday to build a network for sharing ideas and building common projects. Without aiming for the presidential election, they assure. 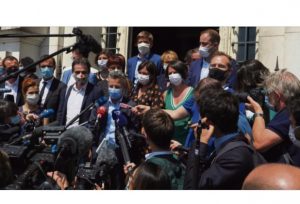 One hundred years after the famous Congress, Tours was once again, on Tuesday, at the heart of the debates of the Left, for a day. Green-pink-red elected officials – mayors, deputies or metropolitan presidents of twenty-one cities – gathered there for a working seminar, at the invitation of the new municipal councilor, Emmanuel Denis, who wishes to create a federation of town halls for “social ecology”. Anne Hidalgo (PS, Paris), Bruno Bernard (EELV, metropolis of Lyon), Nathalie Appéré (PS, Rennes), Johanna Rolland (PS, Nantes), Éric Piolle (EELV, Grenoble), and Léonore Moncond’huy (EELV , Poitiers) notably made the trip.

This meeting is a foreshadowing of the future, said the mayor of Tours. The voters have sent a clear message: they want an acceleration of the transition to renewable energy. Synergies must be set up between these cities, especially those that are ecologically advanced, a network of humanist cities.”

Ecology was widely discussed during this meeting, with the issues of 5G, clean transport, the development of bicycle networks, ecological transition and waste treatment. Beyond the environmental issue, elected officials also worked on the city’s policies in terms of youth and precarious employment, integration of working-class communities, reception of refugees, housing and a social and solidarity economy.

“We spent the morning sweeping through the various topics around three central themes, which are solidarity, ecology and citizenship. For each of these subjects, it will then be necessary to have regular exchanges in order to build real common projects, continue to be inspired by what colleagues are doing and weigh in order to remove certain constraints”, explained Gaylord Le Chequer, deputy to the PCF mayor of Montreuil, Patrice Bessac.

The Tours gathering is therefore the birth of a network for the convergence of ideas, exchanges of good practices and mutual aid. It is not a new movement with the Élysée in the sights, say the elected officials present. A few days ago, in the Journal du dimanche, the president of the metropolis of Lyon, Bruno Bernard, had mentioned “an ambiguity” on this subject and a need to “clarify things”. “This has been done, no personal ambition or prospecting for the future of national politics has been put forward,” he said on Tuesday at the end of the first half-day of work.

However, this network of left mayors has an interest in having a national resonance, according to Nathalie Appéré, PS mayor of Rennes: “We are not building a new left here, but a left of the territories which will have to be heard at the national level. It is essential to remove certain blockages, particularly on the ecological transition. We have battles to take to the government. According to Anne Hidalgo, “obviously, this convergence must also make it possible to transform 21 votes of mayors into one. We are decentralizers. We must finally get out of this archaism in which our country has been immersed for a very long time, this Jacobinism, this Colbertism, which means that everything is decided at the level of the ministries in Paris. ”

Hidalgo, the elected mayor of Paris, had already announced, on the eve of the second round of municipal elections, the transformation of its “Paris en commun” platform into a “lasting political structure” with the objective of creating a “federation” with a view in particular to preparing the next electoral deadlines. Until then, all of the questions discussed during the Touraine seminar will then be divided into working groups. “With the health crisis we have become accustomed to meeting remotely, this is what we will do very regularly with all the mayors gathered here, and others like Michèle Rubirola in Marseille”, explained Emmanuel Denis. . Regular meetings like yesterday’s are also planned “in order to maintain momentum and never lose the connection”. The mayor of Touraine hopes to be able to hold this rally again in his city at the end of the year: “Since the split of the left took place in December 1920, we can celebrate this centenary by uniting it again. A sort of inverted Congress of Tours.