A article by Jake Johnson from Common Dreams (reprinted under a Creative Commons Attribution-Share Alike 3.0 License)

The Congressional Progressive Caucus said Sunday that it will formally oppose the National Defense Authorization Act for fiscal year 2021 unless “significant action” is taken to reduce the bill’s proposed Pentagon outlay. 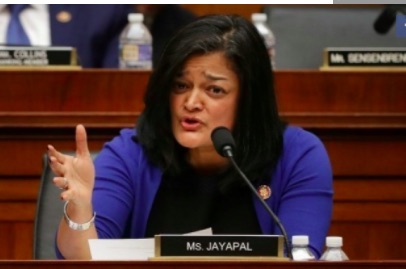 “Rubber-stamping a record $740 billion for the Pentagon shortchanges millions of families trying to get by in this crisis,” tweeted the CPC, which has more than 90 members. “Enhanced unemployment benefits expire in less than two weeks. The federal eviction moratorium expires in six days.”

“Congress should be focused on addressing these urgent crises,” the CPC added, “not passing a wasteful, bloated $740 billion defense bill to line the pockets of defense contractors.”

Along with Rep. Barbara Lee (D-Calif.), CPC co-chairs Reps. Pramila Jayapal (D-Wash.) and Mark Pocan (D-Wis.) are advocating the passage of an NDAA amendment that would cut the proposed Pentagon budget by 10%—$74 billion—and redirect the savings toward healthcare, housing, and education in poor communities.

“This 10% cut is eminently doable and reasonable,” Jayapal said  during an event late last month. “But it’s not going to be easy… As progressives, it is our job to redefine and reimagine what it is to be strong. Strong means an end to endless wars and a return to robust diplomacy and international coalition building.”

Sens. Bernie Sanders (I-Vt) and Ed Markey (D-Mass.) are co-sponsoring a companion amendment in the Senate. In a speech on the Senate floor last month, Sanders described the proposed 10% cut as a “modest” way to begin shifting U.S. spending priorities away from endless war and toward urgent domestic concerns.

With the amendment expected to receive a vote this coming week, Sanders wrote in an email to supporters Sunday that “the time is now to cut military spending and use that money for human needs.”

“How can it be that we have enough to spend more on defense than the next eleven countries combined, but we don’t have enough to make sure every American child has a roof over their head and enough food to eat?” Sanders wrote. “A great nation is not judged by the size of its military budget, it is judged by how well it treats its weakest and most vulnerable citizens.”