A letter from Members of US Congress

Despite lack of attention by the commercial media, described by Jan Oberg, Israel’s proposed annexation of occupied Palestinian territory has been opposed by 100 US organizations and by the following letter by members of the US Congress. 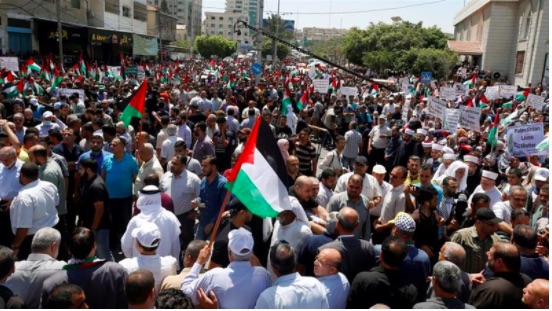 We write to you to express our deep concern over the planned annexation of occupied Palestinian territory by the government of Israel. Prime Minister Benjamin Netanyahu has said annexation could begin as early as July 1, 2020. Should the Israeli government move forward with these plans, they would actively harm prospects for a future in which all Israelis and Palestinians can live with full equality, human rights and dignity, and would lay the groundwork for Israel becoming an apartheid state, as your predecessor John Kerry warned in 2014.We call on you to take all necessary action available to reverse course on this proposal, which will cause more tension and conflict for decades to come. While the full scope and details of the plan are not yet public, Palestinians have overwhelmingly rejected the idea of annexation, and have understandably refused to participate in a process that is not grounded in a recognition of their national rights under international law.

Leading human rights experts warn that annexing parts of the West Bank will perpetuate and entrench human rights violations against the Palestinian people, including limitations on freedom of movement, mass expropriation of privately-owned Palestinian land, further expansion of illegal settlements, continued demolitions of Palestinian homes, and a loss of Palestinian control over their natural resources.

Furthermore, Israel has stated it will not grant citizenship to Palestinians living in annexed territory or to the many more Palestinians living in the isolated enclaves that Israel will opt not to annex, formalizing in law the separate and unequal treatment of the two populations and paving the path toward an apartheid system. Indeed, the UN Special Rapporteur on the situation of human rights in the Palestinian Territory occupied since 1967 has stated that it would “crystalize a 21st century apartheid, leaving in its wake the demise of the Palestinians’ right to self-determination.”

Of further concern, Israeli annexation of the West Bank is a clear violation of international law. Annexation is prohibited by Article 2(4) of the UN Charter and is a prohibited act of aggression under Article 47 of the Fourth Geneva Convention, of which Israel is a party. Forty-seven of the independent Special Procedures mandates appointed by the Human Rights Council at the United Nations reaffirm this. Further, already existing Israeli settlements in the occupied West Bank, including East Jerusalem, amount to a war crime under Article 8(2)(b)(viii) of the Rome Statute of the International Criminal Court because Israel, as the Occupying Power, is prohibited from transferring, either directly or indirectly, parts of its own civilian population into the territory it occupies.

Annexation is specifically prohibited because it incites armed conflict, political and economic instability, systematic human rights abuses, and, most importantly, legitimizes the erasure ofidentity. There is no question that the acre by acre de facto annexation since 1967 for the purpose of new Israeli settlements is a blatant attempt to suppress Palestinian identity and nationhood.

Unilateral annexation in the West Bank is in direct opposition to the principles of democracy and human rights that the United States of America is supposed to stand for. At a time when the American people are taking to the streets to demand justice for all in our own country, there is no question but that such an action would alienate many U.S. lawmakers and citizens. Members of Congress should not be expected to support an undemocratic system in which Israel would permanently rule over a Palestinian people denied self-determination or equal rights.

Should the Israeli government continue down this path, we will work to ensure non-recognition of annexed territories as well as pursue legislation that conditions the $3.8 billion in U.S. military funding to Israel to ensure that U.S. taxpayers are not supporting annexation in any way. We will include human rights conditions and the withholding of funds for the offshore procurement of Israeli weapons equal to or exceeding the amount the Israeli government spends annually to fund settlements, as well as the policies and practices that sustain and enable them.

The United States must remain committed to a future in which all Israelis and Palestinians live with full rights, dignity, and democracy. This means that we do not support policies that would prevent that future, as annexation would. We therefore urge you to make clear to the Israeli government that such a move is unacceptable.

Thank you for your consideration of this request.