This Report is being published in the midst of a long series of horrifying incidents of police abuse of power in the United States. The deaths of George Floyd, Lacquan McDonald, Eric Garner, Michael Brown, Ahmaud Arbery, Tony McDade, Regis Korchinski-Paquet, Breonna Taylor and many others, have echoed throughout the communities of this nation and prompted protests across the country. The video and testimonies from these incidents provide grim illustrations of the power law enforcement officers have over the people they are sworn to serve and protect, and the deadly consequences when they abuse that power. 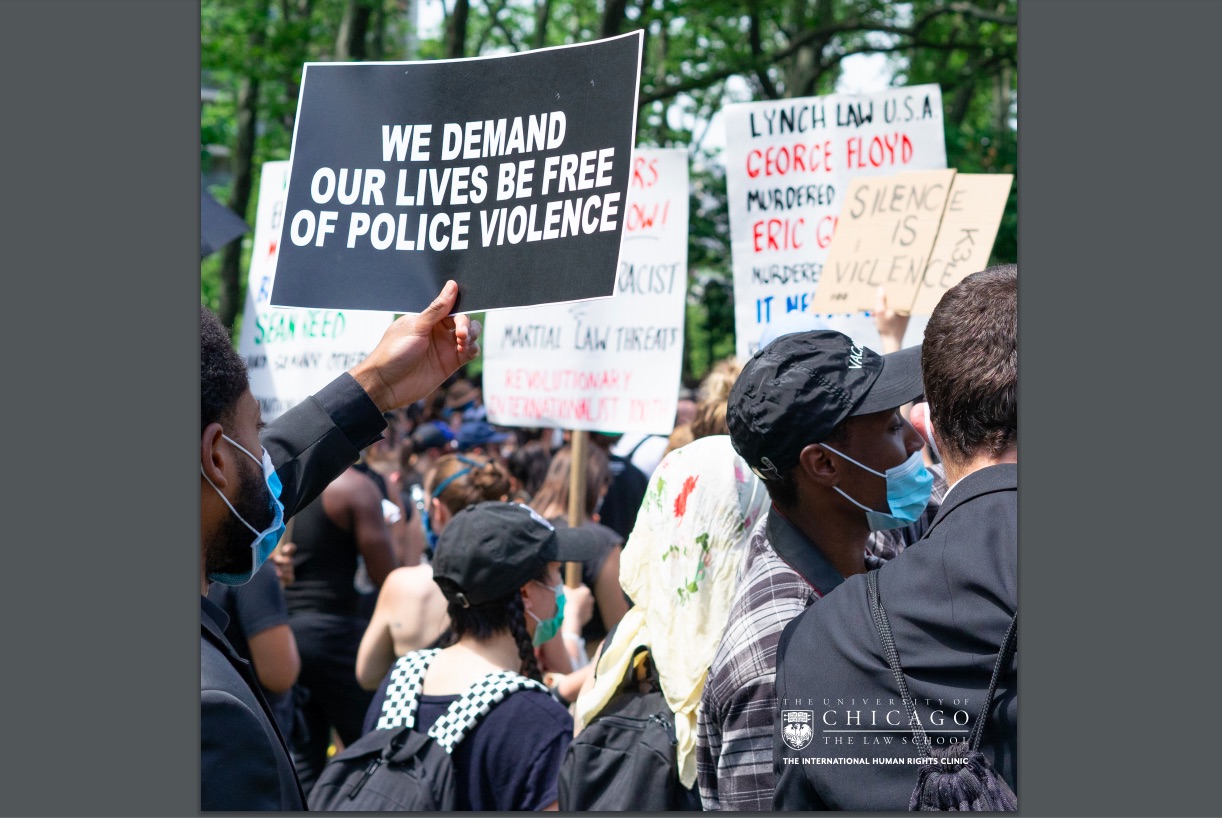 Society vests law enforcement with the responsibility to protect public safety and enforce the law when necessary. For these reasons, and these reasons only, law enforcement officers are granted the immense power to use force, including lethal force. This authority – state sanctioned violence – necessarily comes with limits and obligations to ensure those who enforce the law do not abuse it. These limits and obligations require that police use their power in a manner that protects and serves the entire community that has vested them with this privilege. The exercise of this authority also requires accountability when abuses occur. Without accountability, state sanctioned violence is nothing but the exercise of arbitrary brute force, a common tool of tyrannical and despotic governments.

Yet, as endless reports and studies have indicated, the police in the United States do not always use their power in a manner that reflects the restraint, care and humility promised to its people. The many and terrible deaths of unarmed African Americans, the targeting of poor communities and communities of color, and the absence of a mandate to protect individuals from domestic violence, all sanctioned by the Supreme Court of the United States in the name of police discretion, have scarred many and raised questions of whether the police sufficiently serve their mandate.

Even as the evidence of criminality and misconduct permeates the news, drives thousands to the streets, and garners national outrage, the exact scope and scale of lethal use of force remains unknown. The United States does not count the number of lives lost nationally due to police use of force. And police departments vary as to how and whether data on officer use of force, including the discharge of police firearms and deaths, is collected and published. This absence of comprehensive reporting and publishing of data on police use of force severely limits our ability to see the full picture and to accurately evaluate police misconduct. It also constrains our ability to identify practices and institutional mechanisms in need of reform. The failure by states and the federal government to address this lack of transparency and accountability tells its own story and is, on its own, a cause for great concern.

The human rights of people living in the United States are profoundly affected by how law enforcement officials carry out their duties. Police use of force implicates the basic rights of every individual subject to this power – the rights to life, security of person, freedom from discrimination and equal protection of the laws. These rights, established following the atrocities of World War II in the Charter of the United Nations and the Universal Declaration of Human Rights, form the cornerstone of the human rights system. The challenge of managing police power is a global one. People in every country face the difficult and complex balance between granting police the discretion and resources needed to achieve their purpose, while holding them accountable when they abuse their power in violation of the human rights of the communities they serve.

To address this global challenge, the 193 member states of the United Nations, which include the United States, have developed principles and standards to constrain, direct and ensure the proper use of lethal force. These principles – legality, necessity, proportionality and accountability – have been developed and concretized in various forms in the international system, and have been articulated in resolutions by the U.N. General Assembly, rules by committees of experts, and findings by U.N. Special Procedure Mechanisms. These principles and the rules they establish represent the best global effort to consider how police discretion and accountability can contribute to a just and humane society that respects and protects the rights of all its individuals.

In the United States, some of these principles have been adopted and articulated by our courts and law makers. However, this country lacks a comprehensive and effective national legal framework that places specific conditions on the use of force and establishes mechanisms of accountability.5 While the Constitution sets some limits on the use of force, the standards set by the Supreme Court in its case law fall woefully short of meeting the international standards, and Congress has failed to take action to fill this critical gap in federal law.6 Due to the decentralized nature of law enforcement in the United States, and the failure of national leadership to set uniform, federal standards, the main restrictions on police use of force exist at the state and local level. State law and police departmental policies provide the principles and standards on use of force and the consequences for when that authority is abused.

While, in many states, legislation provides some direction on the use of force to police departments, research and data indicates that state laws have overwhelmingly failed to do so in an effective manner. In 2015, Amnesty International, USA released “Deadly Force: Police Use of Lethal Force in the United States,” evaluating state laws’ compliance with international human rights standards. Alarmingly, the report found that not a single state’s law fully complied.

This Report builds on Amnesty’s findings by examining the other main source of accountability for the use of force: police department policies. To capture a large portion of the population and a diverse set of contexts, this Report evaluates the police policies from the 20 largest cities in the United States during 2017 to 2018.7 These internal departmental policies provide the primary guidance to police officers on when and how they may use lethal force.8 They are intended as manuals for officers on how to execute their duties, written by police leadership and, for the most part, adopted by the governing police boards.9 These policies provide the substantive standards that officers are trained on and the principles that departments must operationalize. Policy violations trigger internal and sometimes external reviews and possible disciplinary measures.

While police policies vary, a use of force policy generally establishes the magnitude and nature of the threat that must exist, and the level of certainty police officers must have, to justify the use of lethal force.10 Some policies call for a gradual escalation of the use of force; some list a series of measures an officer must or should take before resorting to lethal force.11 They also prescribe what must happen after force has been used, who must be notified, and how an investigation unfolds.

This Report reviews and analyzes these policies to better understand how and whether police departments provide meaningful and effective direction to officers on the use of lethal force in a manner that respects the rights of the people they are charged to protect and serve. To evaluate use of force policies, authors developed and applied a grading system based on international law and standards on police lethal use of force. Through this evaluation, authors found that the policies in all 20 cities reviewed fail to meet international human rights law and standards. These use of force policies grant police undue discretion and insufficient guidance on when lethal force can be used, and they fail to establish strong enough accountability mechanisms.

Part I of this Report provides summary of findings and recommendations for the development of a robust mechanism to constrain police lethal use of force. Police departments across the country allow for the use of force in circumstances where there is no immediate threat to life, such as allowing exceptions for the capture of a fleeing suspect. And almost none of the city policies provide adequate oversight and accountability mechanisms.

Part II presents the international law and standards governing police use of lethal force in the United States. It highlights the four main principles derived from these standards – legality, necessity, proportionality, and accountability – and explains their application to police use of force policies.

Part III uses these four principles to analyze and grade the use of lethal force policies of the 20 largest U.S. cities. Like the laws of the 50 states, not a single policy fully complied with international human rights law and standards. In fact, some policies fell well below full compliance, for example, failing to require that lethal force only be used in response to the immediate threat of deadly force.

Ultimately, deep, structural reform of the United States’ law enforcement system is needed. The police in the United States kill more people than any of our peer nations.12 In a 24-day period in 2015, police in the United States shot more people than the police did in England and Wales in 24 years.13 By all measures, the current system is broken. As this Report demonstrates, the very laws and departmental policies that are meant to guide police officers on how to make the difficult, life and death decisions that are required of them, do not comply with human rights. Structural reform to end police killings of unarmed black and brown men and women must start in the police departments themselves with human rights-compliant use of force policies.

Not one of the police departments in the 20 largest cities in United States has a human rights compliant use of force policy. None of the policies are constrained by a state law that complies with human rights law and standards. And too many police departments allow the use of lethal force in response to a non-lethal threat, thereby sanctioning unnecessary and disproportionate use of force.

These policy failures have contributed to the tragic killings of unarmed black and brown men and women by police officers around the country. Ensuring police use of lethal force in the United States is constrained by international human rights law and standards requires a broad range of legal, institutional and practical measures, from a solid grounding in legislation, to a committed political and police leadership. Human rights compliant laws and police policies are an absolutely necessary component, but they alone cannot operationalize and make real the human rights law and standards embodied in the four core principles. Instead, law and policies provide the foundation on which a structure of reinforcing attitudes, practices and mechanisms must be built.